← Chris Kreider preparing himself to take the next step
Rumor Mill: McKenzie – Rangers may think about moving Rick Nash → 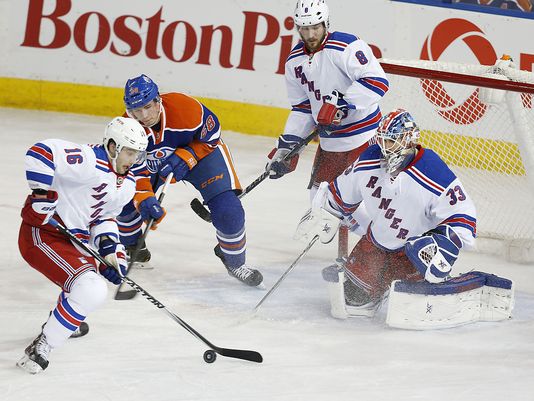 Cam Talbot could potentially be the Oilers next starting goaltender, if a trade happens this summer. Photo courtesy of Perry Nelson/USA TODAY Sports.

According to ESPN’s Pierre LeBrun, the Edmonton Oilers and San Jose Sharks have expressed interest in acquiring the Rangers’ backup goalie, Cam Talbot. While the Oilers have been a rumored destination for Talbot if he is traded, the Sharks are new comers.

The Rangers are really in no rush to send Talbot away, who is under contract for the 2015-16 season for a measly $1.45 million cap hit. Talbot had the best season of his young career, finishing with a 21-9-4 record, along with a solid 2.21 GAA and a .926 save percentage.

The Rangers learned the importance of having a quality backup goaltender after Henrik Lundqvist went down with a vascular injury in his neck, leaving him out of the lineup for seven weeks, which amounted to 25 games. Talbot started 23 of thems, posting a 16-4-3 record with a 2.16 GAA and a .929 save percentage.

His impressive stat line over 57 career appearances, along with his very affortable cap hit, makes Cam Talbot an attractive trade target for a team looking for a starting goalie. Talbot proved that he could handle the heavy workload of a number one goalie, and play well, when Henrik was out.

The Oilers have been looking for a number one goalie for quite some time now. This year, they mainly used a combination of Ben Scrivens and Viktor Fasth, but neither of them were all that good. Both Scrivens and Fasth had a goals against average of over 3.00, and a save percentage below .900. Richard Bachman was okay in his five starts, but only played in seven games throughout the season. They have some decent goalie prospects, but none are ready for the NHL yet.

Edmonton may be a bit wary of trying to acquire Talbot, because they were in the same exact situation in the 2013-14 season when they acquired Scrivens from the Kings. When Jonathan Quick was injured, Scrivens came in and played very well as the number one goalie in Los Angeles. He has not been able to replicate that success with Edmonton.

The bigger problem with the Oilers is their defensemen. They don’t have a true number one defenseman, or a top d-pairing, especially after trading Jeff Petry to Montreal. They could be looking to address that need first.

The San Jose Sharks are the new name in the potential trade for Cam Talbot. Since the 2010-11 season, Antti Niemi has been their starting goaltender. The veteran’s production has dipped over the past few years, and the Sharks are unlikely to resign him. Talbot is a younger, more affordable option that could be an upgrade in net.

San Jose failed to make the playoffs for the first time since the 2002-03 season, and are beginning next season with a new head coach, Pete DeBoer, so starting with a new goalie would make sense. Like Edmonton, they have a second round pick, relatively high, that the Rangers could get for Talbot, or maybe even a prospect.

This is not a sure bet to happen, especially with both the Oilers and Sharks looking at other goalies as well, such as Robin Lehner from Ottawa. Edmonton could even sign Antti Niemi if the Sharks do not resign him.

The Rangers also do not have any backup goalie candidate in their own organization, which means that they would need to sign a free agent as a backup. That may be a reason for them to keep Talbot.

← Chris Kreider preparing himself to take the next step
Rumor Mill: McKenzie – Rangers may think about moving Rick Nash →