Rangers preseason continues with game against the Devils; Vesey to start

After a win in the first preseason contest against the Islanders, the Rangers host the Devils tonight at Madison Square Garden as the team continues to look at players fighting for roster spot and their roles in the regular season.

The Rangers announced the lines and defensive pairings the other day, and the top line is the most intriguing. Jimmy Vesey will make his first appearance with the team on the left wing. Kevin Hayes will center that line, and Rick Nash will play on the right. END_OF_DOCUMENT_TOKEN_TO_BE_REPLACED 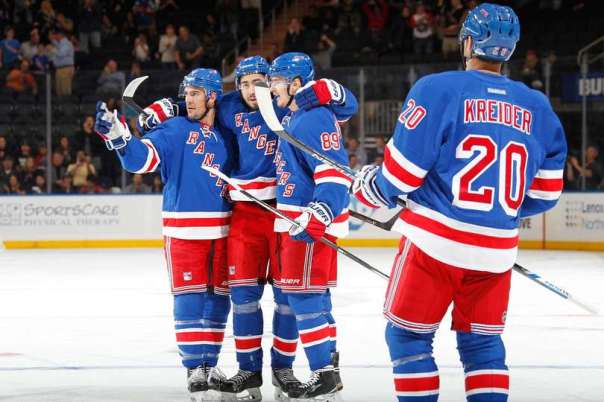 The Rangers opened their preseason games with a bang, securing a 5-2 win in a pretty dominant outing over the New York Islanders. There were a lot of positives to take from this game despite it being against a split Islanders squad.

The offseason moves seem to already paying off, and the Rangers played differently than they did last year based on their personnel. For the preseason I won’t be doing goal breakdowns or a period-by-period summary, but instead a bullet list with observations.

END_OF_DOCUMENT_TOKEN_TO_BE_REPLACED

After a long summer of waiting following a first round exit, New York Rangers hockey is back with the team beginning preseason play against the New York Islanders tonight at Madison Square Garden.

This marks the first of six preseason games that will be played before the team opens the regular season on October 13 at MSG against the Islanders. Following a lot of offseason moves and the development of young prospects, Alain Vigneault has a lot of new players to watch as he works on finalizing his roster.

Tonight, 11 of the 20 players on the ice for Vigneault have not appeared in a regular season game for the Rangers, including some exciting young prospects as well as offseason acquisitions. The top line features longtime Ranger Chris Kreider alongside Mika Zibanejad and highly touted Russian Prospect Pavel Buchnevich. And according to AV, they’ll be tough to play against. END_OF_DOCUMENT_TOKEN_TO_BE_REPLACED

Reasonable expectations for the Rangers 2016-17 Season

Before the offseason started, there were talks about Jeff Gorton and the Rangers doing some minor tinkering and potentially entering the first phase of a rebuild. The team looked to have some major flaws and holes, an aging blue line and issues to address before opening night.

But Gorton made a lot of small, smart depth signings during Free Agent Frenzy, a trade for Mika Zibanejad, brought aboard a highly coveted NCAA prospect in Jimmy Vesey, and even made some changes to the coaching staff and management.

The moves made in the offseason show that the Rangers aren’t looking to rebuild and exit the first round this season, they’re looking to contend. END_OF_DOCUMENT_TOKEN_TO_BE_REPLACED