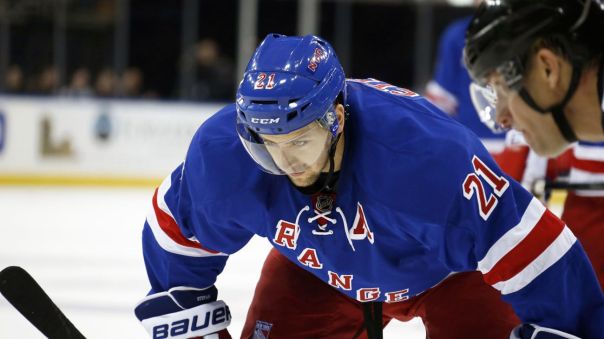 After the morning skate and during Alain Vigneault’s press conference, the head coach announced that Derek Stepan will miss four to six weeks due to his broken ribs.

Stepan was hit late into the boards by Bruins winger Matt Beleskey and suffered the injury on that play. This is just the second time in his career that he will miss regular season games, as Stepan has been one of the “iron men” on this team.

This is brutal. Saying that he is a big part of the team is an understatement. Stepan is the second line center, plays 17 minutes a night in all situations, scores points, plays excellent defensive hockey, and he’s been pretty clutch at times in his career. There are big skates to fill for the next month or so. END_OF_DOCUMENT_TOKEN_TO_BE_REPLACED

Rangers need a big rebound win at home against the Hurricanes

“When you lose one, let alone two, you push the urgency button. Three is not acceptable for a team of our caliber.”

Those were the words that Rick Nash told reporters following the Rangers (16-6-2) following their shutout loss to the Philadelphia Flyers at Madison Square Garden this Saturday, recording just 24 shots on goal, including 14 over the last 40 minutes. They’ll look to avoid a four game losing streak when they take on the Carolina Hurricanes (8-11-4) at the Garden tonight.

The Rangers are closing out the month of November, looking to end it on a high note. It’s been a successful month, with the team posting a 9-4 record, but they have lost three straight games in regulation, two of those coming on home ice. In those games, they’ve been outscored 12-4, with seven of those goals coming in the third period, a big surprise based on the team’s play in the third period all season long. END_OF_DOCUMENT_TOKEN_TO_BE_REPLACED

The Rangers have some MAJOR flaws, and it starts with the defense 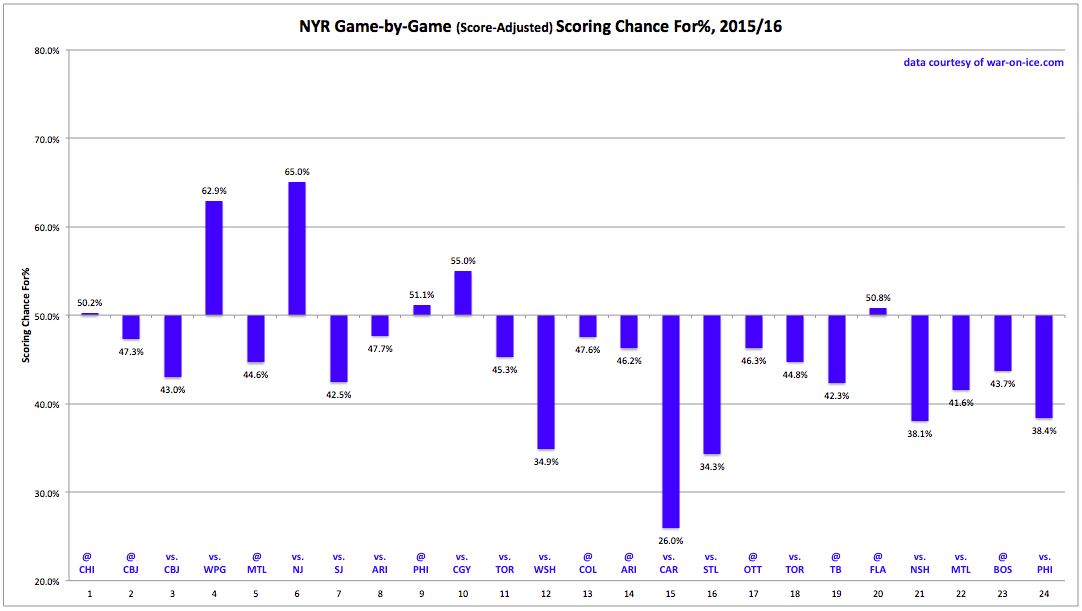 Looking at this chart hurts.

It’s really odd to be extremely worried about the play of the Rangers, a team with 16 wins, 34 points and the fourth best record in the league. But the truth is that this team is playing really poorly, and they’re miraculously exceeding what the numbers suggest should happen.

But it may not be that way for long. END_OF_DOCUMENT_TOKEN_TO_BE_REPLACED

After two pretty disappointing effort against the Canadiens and Bruins, the Rangers (16-6-2) continued their losing streak to three straight with a 3-0 loss at the Garden with Raanta in net. It was the second meeting of these teams. The Flyers took the 3-2 win in the last game in a shootout in Philadelphia and have now gone 2-0-0 on the season. They broke an eleven game losing streak at the Garden with the win.

In Friday’s matchup against Boston, Derek Stepan took a hard hit, and two of his ribs were broken. He is out indefinitely as of right now. Coach Vigneault’s decision was to give Hayes a chance at center in Stepan’s absence, with Kreider on the left and Etem on the right.

A bitter rivalry between the Rangers and Flyers reared its head in Saturday’s contest. The fighting started early when McIlrath dropped the gloves with Luke Schenn early in the period. But the physicality didn’t stop there. The Rangers, who aren’t a very physical team, recorded 15 hits in the first period alone to the Flyers’ 11. END_OF_DOCUMENT_TOKEN_TO_BE_REPLACED

Rangers take on Flyers in first game without Derek Stepan

After two disappointing losses, the Rangers (16-5-2) were handed another tough pill to swallow, losing center Derek Stepan for an indefinite amount of time after he broke some ribs following a late hit from Bruins winger Matt Beleskey.

That means that Vigneault will have to adjust his squad accordingly as they prepare to take on the Philadelphia Flyers (8-10-5) for the second of five matchups between the longtime rivals, and the first of two games at Madison Square Garden.

The Rangers did have their nine game home win streak snapped against the Canadiens on Wednesday, but they still have been superb at MSG, posting a 10-3-1 record. They have not lost three consecutive games in regulation since very early last season, a stretch from October 11 to the 14, so they’ll aim to end their mini slide today. END_OF_DOCUMENT_TOKEN_TO_BE_REPLACED