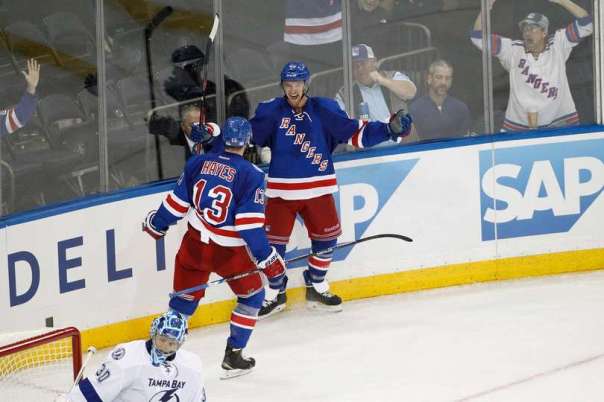 Rick Nash opened the goal scoring in the second period, and from there the floodgates opened. Jimmy Vesey and JT Miller each scored in this period, while Michael Grabner netted the first of his hattrick in the middle period. Antti Raanta finished the game with 31 saves, surrendering a late goal to Steven Stamkos that spoiled the shutout.

Here’s my recap with some thoughts and observations; END_OF_DOCUMENT_TOKEN_TO_BE_REPLACED

Rangers head back home to battle the Lightning; Kreider doubtful 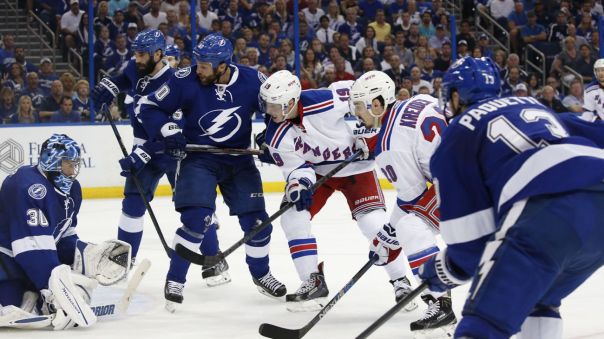 After a brief stop in Carolina that resulted in a 3-2 loss, the Rangers (5-3-0) look to get back to their winning ways when they take on the Tampa Bay Lightning (5-3-0) at Madison Square Garden.

In that loss to Carolina, Mats Zuccarello scored both Rangers goals, giving him four this season. Pavel Buchnevich recorded an assist in his first game back from back spasms, and Ryan McDonagh also tallied an assist, on a marvelous stretch pass, to extend his six game point streak. Mika Zibanajad’s assist kept him at a point-per-game pace through eight games (2-6-8).

The Lightning played last night in Newark, falling to the Devils by a score of 3-1. Andrei Vasilevskiy allowed three goals on 20 shots and the team’s lone goal came from Tyler Johnson. Tampa Bay has had trouble with starting slow, and that happened again when they gave up two goals in the first period to New Jersey. END_OF_DOCUMENT_TOKEN_TO_BE_REPLACED

Brandon Pirri might end up being the steal of the summer 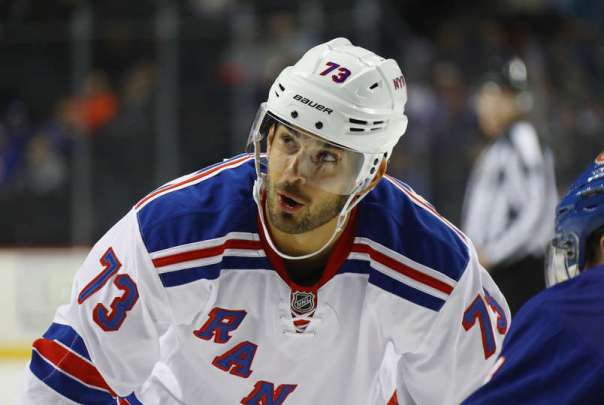 When the Rangers signed Brandon Pirri to a one year, $1.1 million contract this offseason, many fans and blogs covering the team were thrilled. The deal was a bargain and he’s a shifty, smart player with a knack for scoring. Despite bouncing around the league a bit, Pirri has shown flashes of being a really special player.

Initially drafted by Chicago, Pirri really made his mark with the Florida Panthers. In 21 games with them in 2014, he scored seven goals and 14 points. The following season he wound up scoring 22 goals in 49 games, showcasing his elite shooting ability. Prior to the start of this season, Pirri was scoring at a rate of 1.31 goals per 60 minutes, higher than Evgeni Malkin, John Tavares, James Neal, Brad Marchand and Zach Parise over the last three years.

After splitting time between the Panthers and the Ducks last year, Pirri was surprisingly not given a qualifying offer by the Ducks and the Rangers were able to snatch him up. And he’s been a fantastic signing so far. END_OF_DOCUMENT_TOKEN_TO_BE_REPLACED 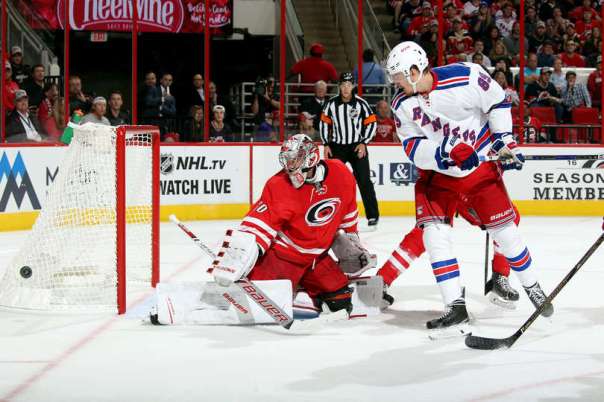 The Rangers broke their three-game winning streak with a 3-2 road loss to the Carolina Hurricanes Friday night. They had a strong attempt to come back in the third, but Ward stood tall in net for his team and helped give them their first home opener win in eight years.

After two bad giveaways, the teams traded chances but failed to capitalize. Soon after, Faulk’s delay of game penalty allowed the Rangers to really get their offense going on the power play. After a few attempts, Mika Zibanejad thought he put the puck behind Ward, but it somehow came back out, and Zibanejad fed an open Zuccarello. He ripped a shot from the circle that found its way past a sprawled Ward. The Hurricanes challenged for goalie interference, but in looking at the replay, it seemed as though one of the Hurricanes’ own players fell on top of Buchnevich in front of the net, so it was ruled a good goal.

Carolina responded fast, though, and put one past Lundqvist, as there was no defender in front of him. Jeff Skinner received credit for the slap shot that tied the game at 1. END_OF_DOCUMENT_TOKEN_TO_BE_REPLACED 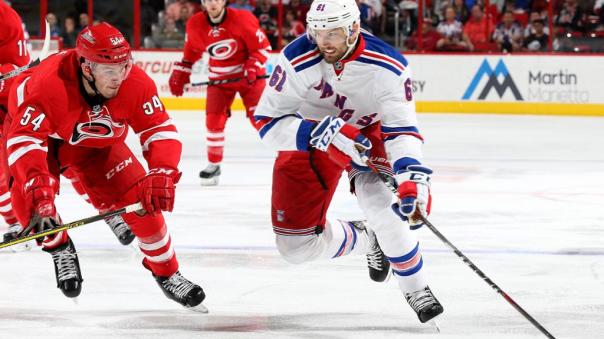 Following an exciting comeback win over the Boston Bruins, the New York Rangers (5-2-0) are back on the road briefly, taking on the Carolina Hurricanes (1-3-2) at PNC Arena.

The Rangers have won their last three games, taking down the Bruins with five unanswered goals; two from Brandon Pirri, and one from Rick Nash, Jimmy Vesey and Kevin Hayes. Four players scored while 10 players picked up a point, continuing the trend of offensive production from all over the team.

While the Rangers have played a lot of home games, the Hurricanes have yet to play one, with tonight marking their home opener after starting the season with six straight road games. They’ve lost the last two games by a combined score of 9-5, but their three other losses have been by just one goal. The Hurricanes are winless in their last seven home openers (0-6-1). END_OF_DOCUMENT_TOKEN_TO_BE_REPLACED