How should Alain Vigneault utilize Dan Girardi? Or should he? 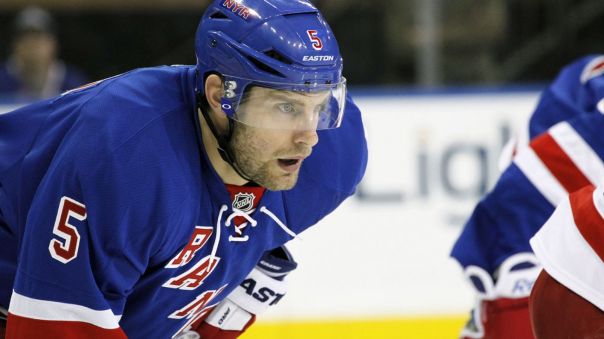 Last night in my recap of the Rangers’ win over the Arizona Coyotes, I wrote that it was a mixed bag of performances from some of the players. Guys like Matt Puempel, Nick Holden and Kevin Hayes had fantastic games, but in reality, the Rangers let one of the worst teams in the league stick around and almost win.

Part of that had to do with the defensive effort. There were some bad bounces, like on Anthony Duclair’s goal, but there was also just bad coverage and decision making throughout the night.

In the Rangers’ win over the Ottawa Senators, Dan Girardi had one of his worst games of the season. This came after Alain Vigneault said that starting him on the top pairing was a “no doubt” decision because of the two player’s “history together” and because Girardi is effective when he’s “making his reads” and “moving his feet.” But he was way out of position on the first Ottawa goal, had countless turnovers, and struggled with his passing. END_OF_DOCUMENT_TOKEN_TO_BE_REPLACED

The Rangers (25-12-1) came into Arizona to face the lowly Coyotes (11-20-5), but it was an extremely close game in Glendale, one that took four power play goals and a hat trick from Matt Puempel to secure a 6-3 victory.

Puempel scored all three goals on the power play, becoming just the third Ranger to score a power play hat trick since 1986. Marc Messier (3/22/92) and Mike Gartner (1/31/94) were the other two. It was also his first career hat trick.

This was a mixed bag for the Rangers. They did a lot of things right. The offensive effort was strong, with the Rangers generating a lot of quality chances and shots, the power play running at full efficiency, and all four lines playing well in both zones. But they allowed the Coyotes to hang around and chip away at their lead until they tied the game at three. The defensive effort wasn’t all that great either. Realistically, this should have been an easy win, but the way they played at times made it difficult on themselves. END_OF_DOCUMENT_TOKEN_TO_BE_REPLACED

The Rangers (24-12-1) came out of the Christmas break with a huge come-from-behind win over the Ottawa Senators, and look to keep on rolling as they take on the Arizona Coyotes (11-19-5) in Glendale, AZ.

This marks a matchup between one of the league’s best teams, and one of the league’s worst. The Coyotes have fewest wins and the second fewest points, struggling with injuries and an extremely young roster. The Rangers have also had to deal with a pretty significant amount of injuries among the forwards, but their depth and talent has kept them afloat.

This two-game road trip for the Rangers has them facing the Coyotes and the Avalanche, the two worst teams in the league. After that they take on the Sabres and the Flyers, so this presents a big opportunity for them to pick up some points they’ll need down the line. END_OF_DOCUMENT_TOKEN_TO_BE_REPLACED

Derek Stepan’s value and importance to the Rangers is immeasurable

Despite an awful first period and sub-par games from many of the Rangers’ players last night, the character and resolve from the team was there as they erased two separate two-goal deficits and scored three unanswered to pick up a win. It was simultaneously lucky and a character building win at that.

Two players had a huge part in the come-from-behind effort; Nick Holden scored two goals and was the best defensive player on the ice, continuing his resurgence from the start of the season and giving him six goals and 18 points this season – that’s more than Oliver-Ekman Larsson, Drew Doughty and P.K. Subban.

Derek Stepan was the other guy who played a huge role in the win last night. Recently, he’s been criticized by fans for not being a consistent performer, not living up to his contract, and perhaps worthy of a trade. But in reality, Derek Stepan is one of the most valuable and important pieces to this team. END_OF_DOCUMENT_TOKEN_TO_BE_REPLACED

Following two consecutive losses prior to the Christmas break, the New York Rangers rebounded with an impressive, come-from-behind, 4-3 victory over the Ottawa Senators Tuesday night.

The Ottawa Senators came out flying, as they scored on their first two shots on goal of the game. Just 2:02 seconds in, Borowiecki ripped a shot past Raanta, who was playing because came down with the flu. Raanta was screened by four players in front and didn’t see the puck as it flew past him. Just a minute and three seconds later, Smith notched his eighth of the season from Karlsson and Stone. Smith picked up a pass in front and put it behind Raanta with no one covering him.

A while later, Marc Staal and Kyle Turris both committed minor penalties, so the teams played a brief four on four. It was during this time that Nick Holden gave his team some life on a sharp-angle shot from right circle that beat Mike Condon above his shoulder, slicing the lead in half. McDonagh and Hayes had the assists on the goal, which was Holden’s fifth of the season. END_OF_DOCUMENT_TOKEN_TO_BE_REPLACED