Derek Stepan’s value and importance to the Rangers is immeasurable 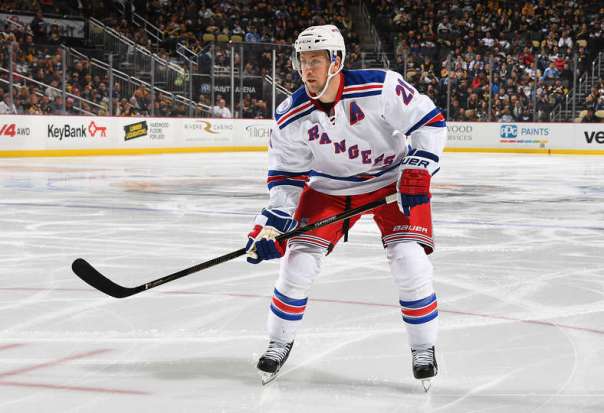 Despite an awful first period and sub-par games from many of the Rangers’ players last night, the character and resolve from the team was there as they erased two separate two-goal deficits and scored three unanswered to pick up a win. It was simultaneously lucky and a character building win at that.

Two players had a huge part in the come-from-behind effort; Nick Holden scored two goals and was the best defensive player on the ice, continuing his resurgence from the start of the season and giving him six goals and 18 points this season – that’s more than Oliver-Ekman Larsson, Drew Doughty and P.K. Subban.

Derek Stepan was the other guy who played a huge role in the win last night. Recently, he’s been criticized by fans for not being a consistent performer, not living up to his contract, and perhaps worthy of a trade. But in reality, Derek Stepan is one of the most valuable and important pieces to this team.

Ever since joining the Rangers for his first season in 2010, Stepan has been extremely consistent, very reliable and someone that can be counted on in a variety of situations. He’s never scored less than 44 points in a season, which came in the lockout-shortened 2012-13 season, and has reached the 50 point mark in four of the six complete seasons he has played in.

He’s also been either the first or second line center for quite a while, always serving as a steady and reliable force between his two wingers. Stepan is able to chip in some goals, having scored 16 or more every season, play incredible defensively, and free up his wingers to play their own game. That’s part of the reason why guys like Rick Nash, Martin St. Louis, Chris Kreider and more have thrived when playing with Stepan.

Last night, Stepan may have had the biggest role in sparking a comeback. During the first period when the Rangers were playing very poorly, John Giannone mentioned how Stepan was yelling at his teammates because of their poor play and then following that up by leading by example. His line with Chris Kreider and Mats Zuccarello was the only line with consistent chances and pressure.

Stepan then went out and scored two huge goals, both in the second period, to tie the game at three. The first goal was at the end of the power play, jamming home a rebound, and the second goal came four seconds into another power play, expertly deflecting a pass from Mats Zuccarello past Senators goaltender Mike Condon.

With those two goals, Stepan has scored four goals and seven points in the last four games, bringing his season total to 18 points (9-19-28) through 37 games, which leads the teams. He’s been especially important during the absence of guys like Rick Nash and Mika Zibanejad, solidifying the top center position and scoring 14 points in the last 13 games. It’s a big reason why the Rangers have managed to tread water in the division without some of their best forwards.

As of right now, he’s on pace for 62 points in 82 games this season, which would be a career high and place him in the top-15 among all centers in points. Also, since Jan. 1, 2016, he’s in the top-10 among centers in points, scoring 68 points in that span, trailin Claude Giroux by just one point. That’s without mentioning his remarkable defensive ability and his leadership both on and off the ice.

His importance is especially felt when he is not playing. He played every game in his first four seasons, which further speaks to his reliability, but missed 14 games in 2014-15 and 10 games last season. In the 2014-15 season, the Rangers were pedestrian without him, going just 6-6-2, but had an incredible 47-16-5 record when he was on the ice. Last season, the Rangers again posted an average 5-5-2 record when Stepan didn’t play, and a 41-22-7 record when he did. (via @StatBoy_Steven)

When Stepan doesn’t play, the Rangers are without one of their best defensive players, one of their most consistent performers and a true leader. He can be counted on in any on-ice situation, and consistently steps up in big-pressure situations like the playoffs and when other players are injured. Combine that with the fact that he can almost be guaranteed for at least 50 points, and you have one of the most consistent and reliable centers around.

So while his $6.5 million cap hit might be hefty, it’s worth it for someone with all of the intangibles and on-ice skills that Stepan provides. This team is much better when he plays, and at just 26 years old, there’s still room for him to improve and get even better.