The Rangers (21-13-4) looked to end their eight game road losing streak sating back to November 21st, and they succeeded. They controlled most of the play, despite a few penalties and skated off the ice victorious with a 5-2 win over the Lightning (21-13-4).

Coach Alain Vingeault sent a message before the game, benching young forward Kevin Hayes for his lack of performance. He expected more out of him to this point, and Hayes knows it, too. Maybe after being a healthy scratch last night he’ll recognize that he’s got to up his game to keep a spot on the roster.

The rest of the Rangers must have gotten a message because right off an offensive zone faceoff with just under two minutes into play, Keith Yandle made a great pass from the point to Dan Boyle, who was open at right circle. He didn’t hesitate as he slid the puck past Bishop to notch his fifth goal of the season and give his team a one goal advantage. This goal was also his third in the past five games, as he remains on a hot streak.  END_OF_DOCUMENT_TOKEN_TO_BE_REPLACED

There are a lot of former contenders around the league struggling to live up to the lofty expectations set by the fans, the experts and reporters, and even the team itself. The Rangers (20-13-4) and the Lightning (18-15-4) are two of those teams.

Last year, the Rangers and Lightning squared off for seven games, battling for the title of Eastern Conference Champion. Things could hardly be more different now.

The Rangers have dropped to third in the Metropolitan Division behind Washington and the Islanders, winning just four of their last 16 games. Last year’s Presidents’ Trophy winners are struggling to score goals, losing their fundamentals, and failing to play the same style that helped give them so much success over the last two seasons. END_OF_DOCUMENT_TOKEN_TO_BE_REPLACED

What on earth was that?

The Rangers (20-13-4) had a long, six day break to recuperate and get ready for their game against the Nashville Predators (18-12-6). So what do they do? Come out with almost no offense at first, rebound for a good second period, and then completely fall apart in the third, ultimately losing 5-3.

There’s no other way to say it. This team is fragile. They’re broken. This isn’t a slump, and it isn’t a passing fad. This is their reality. As they are currently constructed, they are not a great hockey team. They aren’t playing like a good team either. Something needs to change. There needs to be a move made to inject life into the lineup.

Dan Girardi and Kevin Klein made their return to the lineup. Klein was okay, but it’s no coincidence that when Girardi returns, the defense goes to shambles. The McDonagh-Girardi pairing is woefully ineffective, Staal was terrible, and McIlrath was sitting in the press box. The defense is just bad, making too many errors, blowing coverages and missing assignments. END_OF_DOCUMENT_TOKEN_TO_BE_REPLACED

Rangers return from break to take on the Predators; Klein and Girardi expected to play 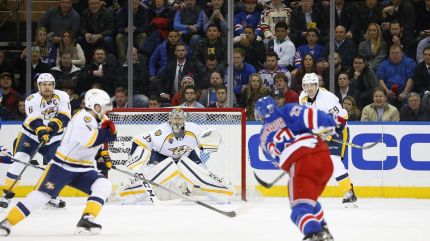 After a long holiday break, given a chance to recuperate and take a mental break, the Rangers (20-12-4) head down to Music City to take on the Nashville Predators (17-12-6), the first game in a three game road trip.

This is the second and final matchup between these two teams this season, with the Rangers coming away with a 3-0 win back on November 23rd at MSG. The Rangers played badly, outshot 31-19, but goals from Rick Nash, Derek Stepan and Kevin Hayes secured a win for the home team.

December has been the month that Alain Vigneault and the Rangers seem to figure things out. Two years ago they were playing .500 hockey until a little before Christmas time. Last season, the Rangers started an eight game win streak with an overtime win over the Penguins on December 8th. But this season? They have just a 3-6-2 record this month as of today. END_OF_DOCUMENT_TOKEN_TO_BE_REPLACED

With all of the injuries on defense recently, the Rangers had to give some of their depth guys more minutes and more prominent roles. Dan Girardi missed time with a minor knee injury, and Kevin Klein was out for a while with a strained oblique.

One of those players that saw his ice time rise was veteran Dan Boyle, the 39 year old defenseman in his second year with the Rangers. Typically placed on the second or third pairing, Boyle saw his minutes and roles rise to that of a first pairing defender, playing upwards of 20 minutes a night and playing a prominent role on the rower play and penalty kill.

At today’s practice, Dan Girardi and Kevin Klein were both back and practicing with the team, meaning that they’ll likely play tomorrow night. While it’s good that the Rangers are getting healthy again, the return of Girardi and Klein poses a problem. END_OF_DOCUMENT_TOKEN_TO_BE_REPLACED