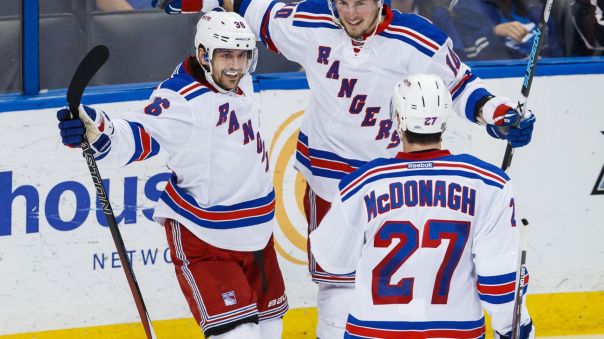 The Rangers (21-13-4) looked to end their eight game road losing streak sating back to November 21st, and they succeeded. They controlled most of the play, despite a few penalties and skated off the ice victorious with a 5-2 win over the Lightning (21-13-4).

Coach Alain Vingeault sent a message before the game, benching young forward Kevin Hayes for his lack of performance. He expected more out of him to this point, and Hayes knows it, too. Maybe after being a healthy scratch last night he’ll recognize that he’s got to up his game to keep a spot on the roster.

The rest of the Rangers must have gotten a message because right off an offensive zone faceoff with just under two minutes into play, Keith Yandle made a great pass from the point to Dan Boyle, who was open at right circle. He didn’t hesitate as he slid the puck past Bishop to notch his fifth goal of the season and give his team a one goal advantage. This goal was also his third in the past five games, as he remains on a hot streak.

To prove the tight defensive play the Rangers started out with, it took Tampa Bay over six minutes to be credited with a shot on goal. The Rangers sustained offensive pressure and broke up plays in the neutral zone, not allowing many opportunities for the opposition.

The Rangers continue to take too many penalties, but Stepan nearly gave the Blueshirts their first shorthanded goal of the season. Bishop mishandled the puck behind the net, and Stepan retrieved the puck but couldn’t get it to a well-positioned Nash in front of the net. They killed off the penalty and allowed no shots on goal.

The Rangers had a power play of their own, and although they didn’t convert, it looked good while it lasted.

In an attempt to bat the puck out of mid-air and into the net, Kreider took a high-sticking penalty on Bishop, but the Rangers yet again didn’t allow a shot on goal.

Taking less penalties has to be one of the areas AV feels needs improvement, and Nash’s penalty cost the Rangers as the Lightning took advantage of the power play. Marchessault deflected a shot from the point by former Ranger Anton Stralman that found its way behind Lundqvist, tying the game at one.

The second period started fast for the Rangers. For the second time in the game, their first shot on goal of the period found the twine. Just 56 seconds into the period, one of the most consistent players for the Blueshirts, JT Miller, gained the blue line and made a finesse move past a Lightning defender. He made a drop pass to Zuccarello who gave the goaltender no time to read the play as he ripped a shot that beat Bishop on the glove side.

The Rangers got their second power play opportunity of the game but again weren’t able to convert as it was negated a minute in by a penalty on McDonagh. The Rangers did a great job on the penalty kill once again, not allowing a single shot on goal, or any offensive pressure for that matter.

A late hit by Tanner Glass sent Brian Boyle over the bench and he got called for a penalty. The Lightning found a way to convert on the power play once again. A goal that was originally waived off because the referees blew the whistle before the puck went behind the goal line was reviewed and overturned. With under nine seconds left in the second period, it was a tie game once again.

Early in the third period, Marc Stall saved the Rangers from a deficit as he swiped the puck just before it went over the goal line. After review of the play, the call stood of no goal, and an intense game remained tied.

It’s amazing how one call can change the course of the game. While it can’t be proven that the no goal call motivated the Rangers, it sure looked like it. A giveaway to Viktor Stalberg led to a wonderful opportunity for Dominic Moore. Stalberg gave the puck to Moore, who was nicely positioned in front of the net. Moore made a few fancy moves on Bishop before putting it on his backhand and past the goaltender for the 3-2 lead.

Kreider had a great chance on a two on one but was denied the goal by the reaching pad of Bishop. For the next few minutes the teams went back and forth, trading chances but being denied both ways.

Viktor Stalberg put things away for his team with a shot from his own zone that found the back of the empty net. With Bishop still pulled, Fast got the assist on Nash’s 12th goal of the season, also an empty netter.

The Rangers have to feel a sense of relief with this one. It’s been a bad stretch on the road, but it’s got to be a great feeling in the locker room to start out 2016 with the knowledge that they can pick things back up and elevate their play to what they know it should be.

The main difference in this game was the strong forechecking and net presence by the Blueshirts. Not to say that Lundqvist was sitting back and relaxing, but the Rangers did a great job blocking shots. Ryan McDonagh said in the post game that he liked how the team stuck to the structure that they knew they needed to play. Hopefully they take this as good faith and turn this ship around. Their next game is on the road against the other Florida team, the Panthers, who currently have a seven game winning streak and are the second hottest team in. the NHL. See the outcome at 7pm on MSG network as the Rangers aim for two consecutive wins.