END_OF_DOCUMENT_TOKEN_TO_BE_REPLACED

Mika Zibanejad back in the lineup as the Rangers host the Stars; Hellberg to serve as backup 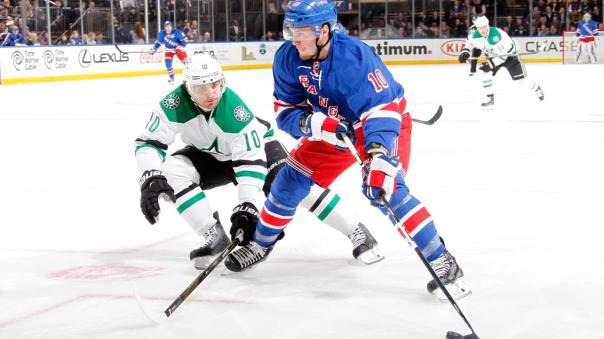 The Rangers (28-15-1) are back at Madison Square Garden tonight, looking to rebound when they battle the Dallas Stars (18-19-8) and snap their two game losing streak.

The Rangers lost both games of their back-to-back over the weekend, coming out flat against the Toronto Maple Leafs on Friday and succumbing to a meltdown against the Canadiens on Saturday. After Antti Raanta left the game with an injury, Henrik Lundqvist came in and surrendered five goals on 22 shots, as well as three in a span of just over a minute.

The Stars have also lost two straight, including three out of the last four and five losses in their last seven games. It’s been a tough season for them, dealing with a lot of injuries and poor goaltending that has put them near the bottom of the Western Conference. END_OF_DOCUMENT_TOKEN_TO_BE_REPLACED

Is it time to be worried about Henrik Lundqvist’s performances?

For the last 12 seasons, no matter what the rest of the Rangers team looked like, you always knew that you could rely on one thing; great goaltending from Henrik Lundqvist on a very consistent basis. But for a lot of games this season, that unfortunately hasn’t been the case for the King.

Against the Montreal Canadiens on Saturday, Lundqvist entered the game in the second period for Antti Raant, who left with an unspecified injury. Raanta stopped all 10 shots he faced. Lundqvist allowed five goals on 22 shots, including three goals in a span of 63 seconds. This happened with the Rangers holding a 3-2 lead, and effectively ended the game and killed whatever momentum the Rangers had.

The meltdown last night meant that Henrik Lundqvist now has an 18-11-1 record with a 2.72 GAA and a .907 save percentage. He’s finished with a GAA over 2.40 just twice in his career and has posted a save percentage below .920 just three times, all early on in his career. The numbers he has now are shocking considering his consistently good numbers throughout his career. END_OF_DOCUMENT_TOKEN_TO_BE_REPLACED

Rangers look to rebound on the road against the Canadiens

Following a loss in their first game out of the bye-week, the Rangers (28-14-1) are on the road to close out their back-to-back series when they take on the Montreal Canadiens (26-11-6) for the first time this season.

The Rangers were sloppy in the 4-2 loss to the Maple Leafs last night, with some poor defensive coverage and decisions as well as some shaky goaltending from Henrik Lundqvist. Chris Kreider and JT Miller scored to make it closer, but Toronto had control of the game from the early stages.

The Canadiens were dominated in their last game, a 7-1 loss at the hands of the Minnesota Wild. Carey Price allowed all seven goals and it continued a trend of the team getting scored on a lot lately. Montreal has allowed four goals against in each of the last three games, and they’ve surrendered 21 goals in the last five games. However, their nine point lead atop the Atlantic Division makes things a bit more comfortable for them. END_OF_DOCUMENT_TOKEN_TO_BE_REPLACED 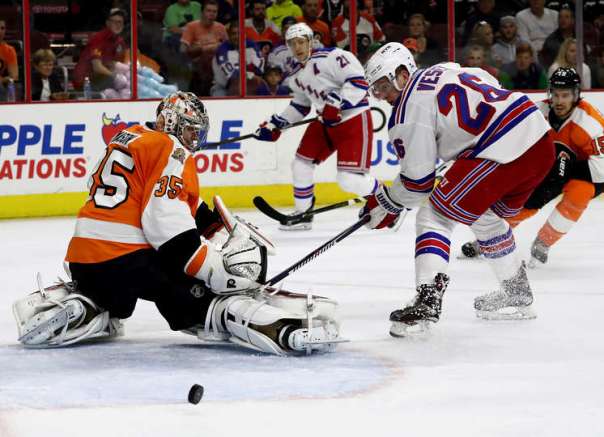 Yesterday was an embarrassing game for the Rangers (26-13-1), who lost 4-1 to the Buffalo Sabres after showing almost no effort or fire in their game. The team needs a quick turnaround, because they take on the Philadelphia Flyers (20-14-5) on the road tonight in what could wind up being an important one for the Metropolitan Division standings.

The Rangers did almost nothing right last night, and were outworked and out-executed by one of the worst teams in the league. Alain Vigneault normally keeps his cool, but he was fuming after last night’s loss.

“There’s no doubt we didn’t do a good enough job in preparing our team for tonight’s game,” Vigneault told reporters. “I mentioned it many times. There are no easy games in this league. We weren’t ready when the game started, our execution was nonexistent. We didn’t have a ‘D’ that could make a pass, and our compete level was not good enough. I haven’t said this very often about this group since I’ve been here, but this was a very bad game where we got outworked badly, and we’re going to need to respond here.” END_OF_DOCUMENT_TOKEN_TO_BE_REPLACED