← Rangers lose 4-2 to Toronto; Kreider and Miller score
Is it time to be worried about Henrik Lundqvist’s performances? →

Rangers look to rebound on the road against the Canadiens 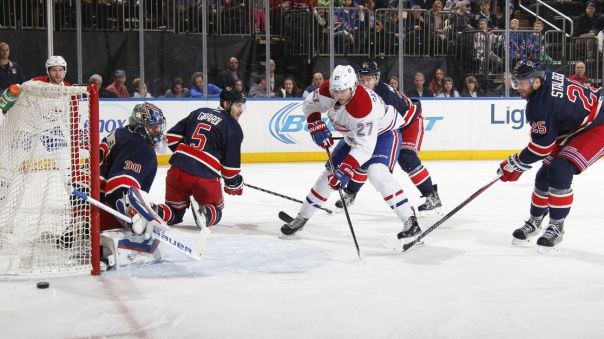 Following a loss in their first game out of the bye-week, the Rangers (28-14-1) are on the road to close out their back-to-back series when they take on the Montreal Canadiens (26-11-6) for the first time this season.

The Rangers were sloppy in the 4-2 loss to the Maple Leafs last night, with some poor defensive coverage and decisions as well as some shaky goaltending from Henrik Lundqvist. Chris Kreider and JT Miller scored to make it closer, but Toronto had control of the game from the early stages.

The Canadiens were dominated in their last game, a 7-1 loss at the hands of the Minnesota Wild. Carey Price allowed all seven goals and it continued a trend of the team getting scored on a lot lately. Montreal has allowed four goals against in each of the last three games, and they’ve surrendered 21 goals in the last five games. However, their nine point lead atop the Atlantic Division makes things a bit more comfortable for them.

This is the first of three matchups between the Rangers and the Canadiens this season, and the only one in Montreal. The Rangers were 1-2-0 last season against the Canadiens, but won their only game on the road. Chris Kreider led the team with two goals and three points. Eight of the last 11 meetings have resulted in a shutout for either Montreal or New York.

Carey Price is the likely starter for Montreal. For most of the season he’s been very good, posting a 20-7-4 record with a 2.28 GAA and a .922 save percentage. But he allowed seven goals on 24 shots in his last start and four goals on 39 shots in the game before that. However, he’s a world class goalie and it’ll be tough to get pucks past him.

Shea Weber was traded to the Canadiens this offseason, ending a long tenure in Nashville for the former captain. But he’s off to a fantastic start in Montreal, already scoring 10 goals and 28 points through 43 games. Eight of those goals have come on the power play, where Weber uses his 100+ mph slap shot to beat goalies. He’s a solid defender, and offensive threat and a big part of Montreal’s game plan.

Alexander Radulov was another offseason addition for the Habs, returning to the NHL for the first time since 2012. He has spent the last few years in the KHL as one of the league’s top scorers, and he’s been a great addition to a Canadiens team that needed some secondary scoring. Playing on a line with Max Pacioretty, Radulov has scored 10 goals and added 22 assists in 41 games. He also has four points (2-2-4) in the last five games.

Chris Kreider scored one of the Rangers goals last night, giving him 17 so far as well as putting him in a five-way tie for the team lead in points with 31. He’s a physical force and one of the team’s most consistent scorers, with five goals in his last five games. Kreider has five points in the last five games against the Canadiens.

Ryan McDonagh picked up another assist last night, giving him 26 points (2-24-26) through 42 games. He’s been a more consistent scorer and has picked up some of the slack with Keith Yandle gone. However, it hasn’t been a fantastic defensive season for him. Part of that is due to being paired with Dan Girardi for so long, but it’s some fault of his own. McDonagh had some bad moments last night and needs to be better against the Canadiens.

The Rangers and the Canadiens will faceoff at the Bell Centre at 7 p.m. The game will be broadcasted on MSG Network.

← Rangers lose 4-2 to Toronto; Kreider and Miller score
Is it time to be worried about Henrik Lundqvist’s performances? →