Welcome back to Quick Hits, a series where I talk about anything and everything around the NHL. The NHL is approaching the halfway mark of the season, and there are some really interesting storylines. The Panthers are in first place in the Atlantic, the Ducks are one of the worst teams in the league, and the Canadiens can’t win without Carey Price.

If there’s anything you want me to talk about in the next edition of Quick Hits, leave it in the comments section below.

The Florida Panthers are legit

Before the season started, I predicted that the Panthers would make the playoffs as a wild card team. I didn’t foresee the Canadiens falling off without Carey Price, or the Lightning struggling, or Detroit playing around .500 hockey.

So to the surprise of just about everybody, it’s the Florida Panthers that lead the Atlantic Division. Dave Tallon has constructed a team with an excellent blend of youth and veteran leadership, constructed through the draft and some smart offseason acquisitions.

Leading the charge is the 43 year old Jaromir Jagr, fourth in all-time scoring and goal scoring, and leading the Panthers in points as well. Just like he did two years ago with the Devils, Jagr is having a resurgence, already totaling 26 points in 34 games. He’s found the fountain of youth down in Sunrise, Florida on a line with 19 year old Aleksander Barkov and the former Calder Trophy winner Jonathan Huberdeau.

That line has been the best for Gerard Gallant, with each player totaling over 23 points. Barkov is red hot, and has five points in the last two games, and 11 points in the last seven games. Huberdeau has served as the set-up man, tallying 21 assists already.

But the team has depth. Reilly Smith was acquired from Boston and has contributed 11 goals and 20 points. Jussi Jokinen has 23 points and 16 assists, Vincent Trocheck has 10 goals and 22 points, and Brandon Pirri has contributed with 18 points. Nick Bjugstad will give the team another forward with size and scoring ability.

On defense, last year’s Calder Trophy winner, Aaron Ekblad, anchors the top pairing and plays a lot of tough minutes every night. He’s also scored nine goals and 18 points, the most out of any Panthers defenseman. Captain Willie Mitchell still contributes strong defense at the age of 38.

Ageless wonder Roberto Luongo has been so good for the Florida Panthers, finally giving them a consistent, solid goalie to rely on. Luongo has a 2.16 GAA and a .926 save percentage.

Don’t sleep on this team. If the Canadiens had Price, then the Panthers probably wouldn’t be in first. But it’s all about capitalizing on the current situation, and they’ve certainly done that. The Panthers have goal scoring. They have an excellent balance of young talent and veterans. They have some good defenders, but they could pick up someone at the trade deadline. And they have the goaltending to make a run in the playoffs. 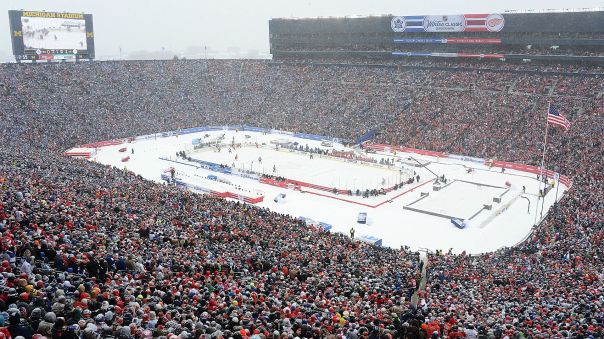 The NHL will kick off 2016 with the annual tradition of hosting the Winter Classic on New Year’s Day, as the Boston Bruins will host the Montreal Canadiens at Gillette Stadium, home of the New England Patriots. This matchup features two longtime, bitter rivals, and an important game in the standings.

The Atlantic Division has just a three point separation between the Detroit Red Wings in fourth place and the Panthers in first. The Lightning are in sixth place in the division, but are just three points out of a playoff spot. A win in the Winter Classic would be big for getting a leg up in the standings.

The Montreal Canadiens need a win more than everyone. Despite having played three more games than the Bruins, they’re just a point ahead of them in the standings. Carey Price’s lower body injury has kept him out since November 25th, and the Habs have faltered. In their last 15 games, they have a record of 3-11-1, with a six game losing streak thrown in there.

Ben Scrivens is expected to start on New Year’s Day, playing just his second game for Montreal. Backups Dustin Tokarski and Mike Condon haven’t gotten the job done, so Scrivens is desperately needed to provide steady goaltending until Price is ready to return.

The Bruins will be without Brad Marchand, who will be serving a three game suspension for his low hit and spear in the game against the Ottawa Senators. Marchand’s 15 goals lead the team, so his offensive production will be missed.

Either way, this will be an exciting and aggressive game between two teams that really don’t like each other. The Winter Classic has become an annual tradition, and watching teams play outdoors, harkening back to pond hockey in the winter, is really cool to watch. The Road to the Winter Classic series presented by EPIX is a great show too. If you’ve missed it, go check it out online.

The Dallas Stars (27-8-3, 57 PTS) and the Washington Capitals (28-6-2, 58 PTS) each lead their respective Conferences, and the Capitals currently have the lead in the President’s Trophy race, sitting one point ahead of the Stars.

The offensive output from both of these teams are amazing. Dallas has scored 132 goals in 38 games, and the Capitals have scored 115 goals in 36 games.

Alex Ovechkin is off to another excellent start, leading the team with 20 goals and 33 points. But there is one big difference with this Capitals team. They finally have depth.

Evgeny Kuznetsov is enjoying a breakout season with 33 points and a team-high 22 assists. Nicklas Bascstrom has 32 points, the injured John Carlson has 27 points, and offseason pick-ups Justin Williams and TJ Oshie both have 24 points.

On top of that, Braden Holtby is solidifying himself as an elite goalie, starting 30 games already and amassing an incredible 24 wins. He’s also leading the league with a 1.86 GAA and is third in the league with a .934 save percentage.

However, the Capitals have the Stars edged on defense and goaltending. When John Calrson and Brooks Orpik both return, the Caps will be a better built team from out of the net. Antti Niemi and Kari Lehtonen have been solid in a platoon role, but have save percentages of just .916 and .911 respectively.

The Stars may have more firepower, but the Capitals are the better all-around team. I didn’t think they’d be this good in my preseason predictions. They’re legitimate Stanley Cup contenders, and they’ll be a tough out in the playoffs.

The potential of changing the playoff format

For the 2013-14 playoffs, the NHL changed the playoff format, with the top three teams in each division securing a playoff spot, and then two wild card teams as well. This was a change from just the top eight teams in the conference, regardless of division, making the playoffs.

I have mixed feeling about this. The new format means a lot more divisional matchups and rivalries in the first two rounds of the playoffs, so the Rangers will be seeing a lot of the Capitals and Penguins in the playoffs. The rivalries will grow and the games will be intense.

But one thing I did like was that anybody could match up against anyone. The Rangers could have played the Panthers, or the Senators, or the Lightning in the first round. The randomness makes it exciting. Also, because the Rangers will always play the Capitals and the Penguins, it won’t be as exciting or memorable since they’ll play practically every year.

And then you have the problem with the Pacific Division. Once regarded as the best division in the NHL, it is easily the worst this season. Only the Kings have a respectable record (23-11-2, 48 PTS), and everyone else is okay at best.

The San Jose Sharks are back in a playoff position, but they’re only 18-16-2 for a total of 38 points. The Arizona Coyotes are going through all sorts of struggles lately, especially with their goaltenders, but they sit in second place despite an 18-16-3 record and 39 points.

The Vancouver Canucks have won only 14 of their 38 games this year, but they’re tied with the Coyotes for points and they’re two points away from second place, and having home ice advantage in the first round of the playoffs. The Edmonton Oilers are 29th in the NHL, and they’re four points out of the playoffs.

If it was the old format, the Colorado Avalanche, part of the Central Division, would hold a playoff spot because of their 39 points. Instead, they’re four points out of a wild card spot.

I’d love to see a return to the old format. It creates more diversity in the playoff matchups, it prevents playoff rivalries from potentially getting stale, and it allows the right teams to get into the playoffs. Enough with the best three teams from each division, and just send the best eight teams from each conference.