← Rangers Rumor Mill: Gorton is “looking to shake things up”
Rangers return from break to take on the Predators; Klein and Girardi expected to play → 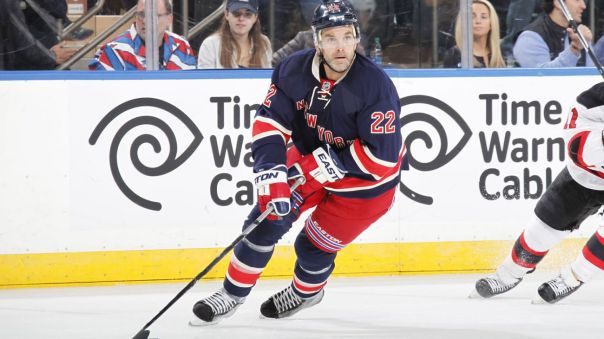 With all of the injuries on defense recently, the Rangers had to give some of their depth guys more minutes and more prominent roles. Dan Girardi missed time with a minor knee injury, and Kevin Klein was out for a while with a strained oblique.

One of those players that saw his ice time rise was veteran Dan Boyle, the 39 year old defenseman in his second year with the Rangers. Typically placed on the second or third pairing, Boyle saw his minutes and roles rise to that of a first pairing defender, playing upwards of 20 minutes a night and playing a prominent role on the rower play and penalty kill.

At today’s practice, Dan Girardi and Kevin Klein were both back and practicing with the team, meaning that they’ll likely play tomorrow night. While it’s good that the Rangers are getting healthy again, the return of Girardi and Klein poses a problem.

Who is going to be taken out of the lineup? One of them will slot in for Chris Summers, which is an easy pick. Prior to the injuries, Dylan McIlrath and Dan Boyle had been rotating in and out of the lineup. They’ve played consistently since the two injuries, with the rookie McIlrath playing the last 11 consecutive games.

Both McIlrath and Boyle have been very dependable since becoming regulars in the lineup. McIlrath seems to make almost no mistakes, can play in all situations, and his physical presence is welcomed.

But Boyle has been just as good, if not better. He’s not too old, he’s not ineffective, and he doesn’t need to rest on off days. Boyle is better the more that he plays.

When he began playing regularly, Jim Cerny of Blueshirts United sat down with Boyle and asked him what the biggest reason for his better play was, and Boyle pointed to the fact that getting consistent playing time was a big help.

In the last 12 games, when the injuries to defenseman started to pile up, Boyle has played upwards of 20 minutes in eight of those games, including a season high 23:17 on November 30th. In the four games that he played less than 20 minutes, the lowest amount of time he played was 19:34. He hasn’t looked tired or sluggish, and is playing better than he has all season long.

Boyle currently has a three game point streak going (2-1-3), with an assist on Zuccarello’s overtime game winner against the Ducks on December 22nd. Boyle has seven points (4-3-7) in the last eight games, and has been on the ice for 16 of the Rangers 22 power play goals.

Girardi and Klein are expected to play tomorrow. Someone needs to sit. And it shouldn’t be Dan Boyle.

When those two return, Boyle shouldn’t see his ice time decrease either, and he shouldn’t get sheltered minutes. That should go to Dan Girardi and Marc Staal, two guys that have struggled with tough assignments.

It seems like Dylan McIlrath is the odd man out, and that’s a real shame. McIlrath has proven that he is an NHL caliber player, and he deserves to be playing every night alongside Keith Yandle. It would be ideal that McIlrath and Boyle play every night, but it would be hard to take out Boyle, especially with his impact on special teams.

← Rangers Rumor Mill: Gorton is “looking to shake things up”
Rangers return from break to take on the Predators; Klein and Girardi expected to play →