Why Anthony Duclair belongs in the NHL

Anthony Duclair has been one of the Rangers better forwards, and the 19 year old has done enough to prove that he belongs.

Anthony Duclair, the exciting 19 year old rookie making headlines with the New York Rangers, may only have a few games left with the Blueshirts before being sent back to juniors.

Let’s clear up a few things first. The “9 game rule” that applies to 18 and 19 year old players allows them to play 9 games in the NHL before being sent back to their respective clubs and “slide,” or delay, the first year of their entry level contract.

However, this rule does not apply to Anthony Duclair. Duclair signed his ELC on January 2nd, 2014, missing the December 31st cutoff to be considered 18 under the CBA.

This means that the Rangers can use Duclair for as long as they like, because he signed as a 19 year old and only maintained one “slide.” The Rangers will burn a year of his ELC whether plays in the NHL or with his junior team.

If Duclair plays more than 10 games in the NHL, the Rangers cannot send him down to get relief from the 50 Standard Player Contract.

With that being said, Duclair benefits the Rangers right now. Night in and night out, he has been a presence on the ice, showcasing his speed, passing ability, and scoring his first career goal against the Minnesota Wild at a crucial moment.

Duclair has openly said that he looks to “pass first, and shoot later,” and he has tallied 4 assists in the 7 games he has played. He has also connected on other passes that did not lead to goals.

Anthony Duclair has a strong wrister to compliment his passing skills. His first goal came on a quick shot that surprised Darcy Kuemper of the Wild and flat out beat him. Duclair also came close against the Blue Jackets, ringing a shot off of the post. Now that he has scored, I expect him to play and shoot with a little more confidence from now on.

Anthony Duclair’s first career goal was a thing of beauty, and came at a crucial moment, typing the game at 4 against the Wild. With how he has been playing, Duclair will continue to tally points for the Rangers the more games that he plays.

It’s important to note that Duclair only has 11 shots on goal, and his goal means that he has a 9.10 shooting percentage.

Duclair’s play style perfectly plays into the 1-2-2 forecheck, as well as the rush style offense that Vigneault employs and that Nash, St. Louis, Kreider, Brassard, and others thrive in. The goal that Duclair scored came as a result of a great outlet pass from Hunwick, and using his speed to beat the defender and get a shot on the goalie which found the back of the net.

Duclair’s style of play benefits other skaters like Martin St. Louis, as his speed and passing abilites creates chances for the other guys on the ice.

Duclair carries the puck through the neutral zone well, and can carry the puck at full speed while moving well and always keeping his head up. The goals that he scored on the rush in the preseason and the regular season are ones that the Rangers often create with their type of offense.

“The Duke” has also used his speed to benefit the team in other ways. Duclair has drawn penalties as a result of his quickness countless times. Because he carries the puck into the zone with ease and often beats his man, a lot of times they are forced to hook him or trip him to prevent a quality chance.

As Vigneault knows and loves, speed can really hurt the opposing teams, and Duclair brings that to the table and fits in with the already existing offense perfectly.

One thing that is always mentioned when it comes to Duclair is where to put him in the lineup. Rick Nash, Martin St. Louis, Chris Kreider, Lee Stempniak. Carl Hagelin, and Mats Zuccarello are all capable wingers who should play every day. One of the solutions, brought to my attention by Nick Mercadante of “blueshirtbanter.com.”

The Rangers can create a shutdown line with their fourth line. Carl Hagelin, who is not a prototypical fourth liner, is already a quality penalty killer and can certainly score some goals. Dominic Moore is also a great penalty killer and an underrated passer. Pairing those two with someone like Ryan Malone can allow AV to pair them up against top competition, eat minutes, shut down team, and score a few goals in the process, all while freeing up ice time for the top three lines, usually the scoring lines, to go and score goals.

Carl Hagelin can provide goal scoring as well as gritty defensive play to a fourth line which could develop into a “shutdown line” for New York.

There is room in the lineup for Anthony Duclair, and his skill set can and has benefited the Rangers every time he is on the ice. He has a goal and four assists in his seven games so far. He also is a plus-5, meaning he isn’t really making any mistakes when he is out there.

Anthony Duclair has done enough to show that he can play with the Rangers. He has played well on every line he has been paired with, has shown he is capable on boh sides of the puck, and will only continue to improve as he plays more and more against high quality competition.

The only way he will develop is by playing more, and the Rangers need to keep him as a top 9 forward with the team. And I’m sure Duclair will continue to benefit the team by scoring goals, make great passes, and drawing more penalties. 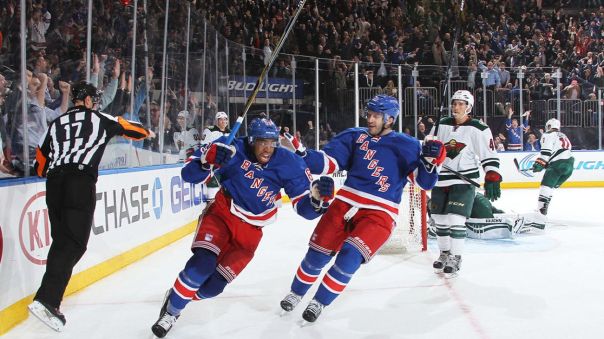 The more that the Rangers continue to play Duclair and give him quality minutes, the better he will become. And he has already been playing pretty darn well.

Anthony Duclair helps the Rangers win right now, and helps make them a better team. If one of the years on his ELC is already going to be used up whether he’s on the team on with his junior hockey team, why not keep him on the team.

Duclair provides many benefits to the Blueshirts and keeping him on the team will help him develop and continue to grow as a hockey player.

This team has already accepted Duclair, and so have the fans. It’s time for management to come together and realize everything that he brings to this team.