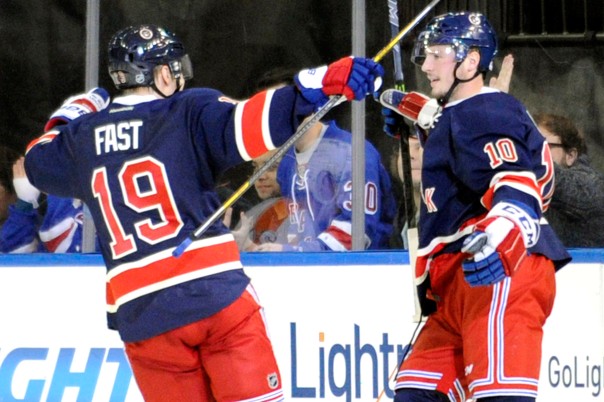 The Rangers have re-signed two more of their RFAs, making JT Miller and Jesper Fast Rangers for the next season. Photo courtesy of Bill Kostroun/AP Photos.

New York Rangers continue to lock up their restricted free agents, signing another three in total today, with the latest signings being Jesper Fast and JT Miller, announced earlier this afternoon by GM Jeff Gorton.

With the latest signings, the Rangers have retained all of their restricted free agents except for Derek Stepan, who is set to go to arbitration on July 27th.

Jesper Fast earned himself a two year deal after a very good season for the 23 year old Swede. In his first season in the NHL, Fast appeared in 58 regular season games, scoring 14 points (6-8-14) in the process. He was excellent in the playoffs, tallying an additional three goals and three assists in 19 games.

Fast is mainly going to be a bottom six player and a penalty kill specialist, but he showed that he’s capable of being a top-six player when needed. His line with Derek Stepan and Chris Kreider was dynamic in the second round against the Capitals.

Fast’s contract is an excellent one; two years at $950k per year against the cap.

JT Miller accepted his qualifying offer from the Rangers, opting to save his arbitration rights for next season, a smart decision by him. Miller is looking to further prove himself on this one year deal in hopes of a bigger, longer contract next year.

Over the past few seasons, we had seen Miller bounce between the NHL and the AHL constantly, not able to find a consistent roster spot under John Tortorella or Alain Vigneault.

However, he turned heads this season with his great work ethic, improved play defensively and without the puck, and his transition into a solid third line player. The 22 year old also appeared in 58 games, totaling a very respectable 23 points (10-13-23).

He was perhaps the unluckiest player in the playoffs, hitting numerous goalposts and crossbars, or getting robbed by great goalie saves. He still managed to finish with eight points, impressing everyone with his one goal, three assist game in Game 6 against the Tampa Bay Lightning while playing on the first line.

I see Miller as a Brandon Dubinsky kind of player. He’s pretty big, physical, and has good hands to boot. I think that with Vigneault able to place full trust in him, we will see Miller get more chances to thrive offensively, and he will probably rarely be a healthy scratch anymore. Don’t be surprised if he comes out of nowhere with a 40-50 point season. He’s much more effective on the wing, and a more mature player.

The team still needs to sign Stepan, and it looks like they can afford to do so. However, Gorton needs to keep some space free in case of injuries and callups, but a $6.5 million contract to Stepan could definitely happen. Hopefully it is a bit less so the team can have some breathing room against the cap.