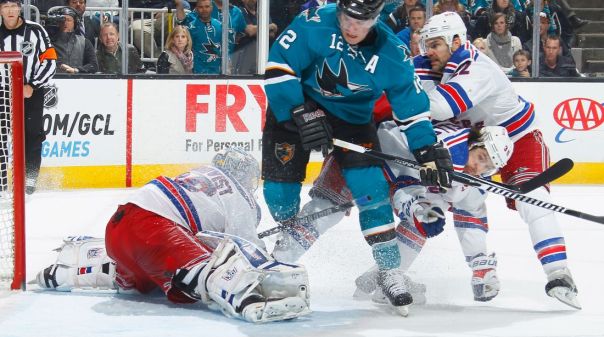 Following a disappointing loss at the hands of the LA Kings, blowing another third period lead, the Rangers (40-23-8) will finish off their three game road trip against the San Jose Sharks (39-25-6) at the SAP Center.

On Thursday, the Rangers took a 3-1 lead into the third period against the Los Angeles Kings. One of the goals looked as if there could have been goaltender interference (but the NHL still doesn’t have a standard for it), and the other goal came from Anze Kopitar with less than five minutes to play. In overtime, Kopitar scored the game winner, and the Rangers threw away a win.

If you told me before the road trip started that the Rangers would get three out of four points against the Ducks and Kings, I would have been thrilled. But it’s the way in which they lost the point that frustrates me. This team is fragile and there’s no other way of saying it. They’re mentally fragile and often fall apart in adversity. They have given up 15 goals that have tied the game or given the other team the lead with five minutes or less to play in the game. And they’ve been playing horribly lately, generating no possession, unable to transition or carry the puck through the neutral zone, and they’ve been getting heavily outshot. Anyone who isn’t worried about this team, should be. END_OF_DOCUMENT_TOKEN_TO_BE_REPLACED

The crazy trade rumors are starting really early this year.

An annual occurrence, Patrick Marleau’s name has been coming up in some trade rumors early. First reported by Kevin Kurz of CSN Bay Area, Marleau had supposedly stated that he would accept a trade to the Los Angeles Kings, the Anaheim Ducks or the New York Rangers.

Marleau is currently in the second year of a three year, $20 million contract. He has a full no trade clause and would need to approve any trade the Sharks would try. TSN’s Bob McKenzie later reported that it is more likely that Marleau asked the Sharks to look at trade possibilities, and it probably wasn’t the Sharks asking for a list of teams.

END_OF_DOCUMENT_TOKEN_TO_BE_REPLACED

Quick Hits: My thoughts after the Derek Stepan signing

Yesterday, we saw Derek Stepan finally re-sign with the Rangers, opting to stay in New York for the next six years. The deal will pay him an average of $6.5 million until he turns 31, which means that he will be an integral part of the Rangers for years to come.

Of course, with every signing or update, I usually have some thoughts and opinions on things. This is a new “series” of articles I will be doing, usually shorter in length, where I’ll discuss my thoughts on the Rangers and what is going on around the league.

If you guys like this type of article, leave feedback in the comments section here, on Twitter (@The_RangerZone), or on The Ranger Zone Facebook page. END_OF_DOCUMENT_TOKEN_TO_BE_REPLACED

This guy is going to be a Ranger for the next six years. Photo courtesy of MSG Photos.

The last domino has fallen into place and Jeff Gorton can check everything off of his to-do list.

Early this morning, around 9:30 am, The New York Rangers and Jeff Gorton announced that the Rangers had agreed to terms with Derek Stepan on a new long term contract.

The deal was six years in length for $39 million, averaging out to a cap hit of $6.5 million a year. Stepan, just 25 years old, will be a New York Ranger until the age of 31, when he will hit the market as an unrestricted free agent.

“Both sides were pretty close to begin with,” said Stepan. “I think both sides are very happy and comfortable with the deal. The whole time, we (both sides) were trying to get a long term deal done. There’s nothing but exciting things to come for us moving forward, it’s a special feeling to be a part of it. We have an exciting group of guys and a group of guys that are ready to take the next step. I can’t be more excited to be a part of a team that I absolutely love!” END_OF_DOCUMENT_TOKEN_TO_BE_REPLACED

The Stepan Situation May Reach Arbiration, and Kevin Hayes is a big reason why

Almost everyone is saying that the Rangers will come to terms with RFA Derek Stepan before the arbitration date. But will they? There are a lot of factors that say otherwise. Photo courtesy of MSG Photos.

As we near the date of Derek Stepan’s arbitration hearing, there seems to be much talk centered around “How Much” and for “How Long”, with many folks feeling the Rangers & Stepan will come to a long-term agreement just under the wire.

Indeed, this has generally been the case with the Rangers. The Rangers last allowed a player to reach an arbitration hearing in 2009. Nikolai Zherdev was the player, and the Rangers chose to not pay him the $3.9 million award.  Instead, they let him walk.

While I certainly don’t think Stepan will be allowed to walk, I do think the Rangers may let arbitration run its course and pay him for 1 or 2 years.  I say this because of: