← Is a big trade brewing between the Rangers and the Ducks?
Rangers fall to Detroit; Jimmy Howard outstanding →

Rangers take on the Red Wings in Original Six battle; Klein back in the lineup 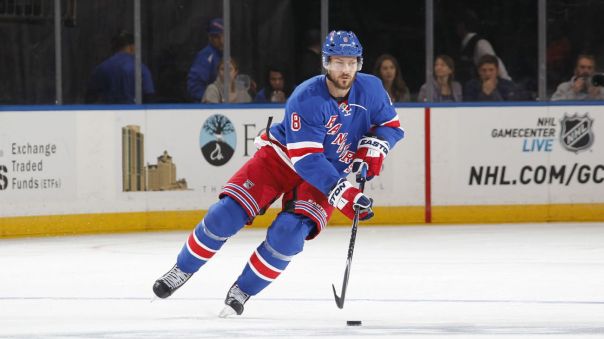 UPDATE: Jimmy Howard will start for Detroit, not Petr Mrazek. Howard is making his season debut. He’s had success against the Ramgers in the past and has been in some great goalie battles against Lundqvist over the past three or four years so this should be a good one.

The Rangers (2-1-0) will look to start their first winning streak of the season when they take on the Detroit Red Wings (1-2-0) at Madison Square Garden.

The Rangers are coming off of a thrilling seven goal win over the Sharks on Monday, a game that featured seven different goal scorers and another two-point game from Chris Kreider in Antti Raanta’s season debut. New York nearly surrendered a three goal lead but managed to respond and hold on.

The Red Wings last played on Monday, their final season opener at the Joe Louis Arena. They beat the Senators 5-1, with defenseman Mike Green scoring his first career hat trick and two goals from Darren Helm.

Petr Mrazek made 31 saves for his first win of the season. Last year Mrazek 27-16-6 with a 2.33 GAA and a .921 save percentage. He has the ability to steal games away and has shown flashes of that in the past.

After being bought out by the Wild this offseason, Thomas Vanek signed a one year, $2.6 million contract with Detroit to try and prove himself. So far through three games, he’s been one of the team’s best players, scoring two goals and five points through the team’s five games. His line with Darren Helm (2-2-4) and Gustav Nyquist (0-3-3) have been really good, and Vanek is a player to watch out for.

Dylan Larkin finished in fifth place in Calder Trophy voting last season after scoring 23 goals and 22 assists in his rookie season. This year, Detroit decided to move him to center instead of the wing, and he’s had a bit of trouble adjusting. So far, he has just one assist and a minus five rating. But he’s still a talented player and a threat on the ice.

Alain Vigneault has offered some updates on the injured players. Dan Girardi is out tonight but will begin skating on his own tomorrow, and Buchnevich remains out with back spasms. However, Kevin Klein will make his season debut tonight, pairing with Marc Staal.

Henrik Lundqivst returns between the pipes tonight after a subpar two games to start the season. He’s had a lot of success against the Red Wings, posting a 5-0-1 record with a 1.14 GAA, a .963 save percentage and three shutouts in his last six games against the team.

We’ll keep talking about Chris Kreider until he makes us stop talking about him. Kreider has been playing like a man possessed, with a goal and an assist in all three games this season. He’s constantly attacking the net and creating a ton of scoring chances. He has posted a stat line of 3-4-7 in nine career games against Detroit and is poised for another big night.

Rick Nash was on that second line with Kreider and Zibanejad and definitely benefited from it. He played his best game of the season and it was not solely because of the goal. Anyone who plays with Kreider and Zibanejad seems to benefit from it, and it was Nash on Monday. In 62 career games against Detroit, Nash has scored 27 goals and 50 points, the most goals against any single team for him.

The Rangers and the Red Wings will face off at Madison Square Garden at 8 p.m. The game will be broadcasted on NBCSN.

← Is a big trade brewing between the Rangers and the Ducks?
Rangers fall to Detroit; Jimmy Howard outstanding →