← Rangers take on the Red Wings in Original Six battle; Klein back in the lineup
No need to worry, the Rangers are much better than their .500 record → 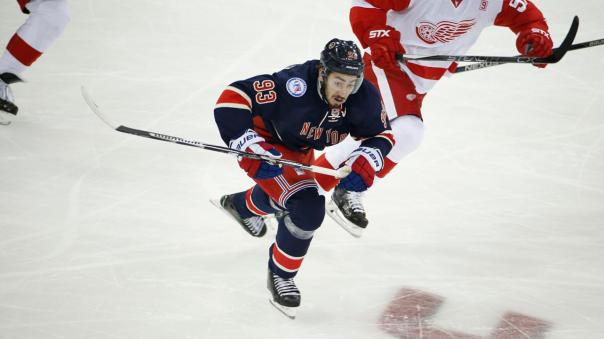 The New York Rangers have been playing some exciting hockey to start the 2016-2017 season. I think we can all agree they’ve been fun to watch with their passion and energy, especially as of late. In their third home game of the season, they’re record went to 2-2-0.

Just over a minute into play, Chris Kreider did a great job getting the puck to the point, and McDonagh ripped a shot that a well-positioned Mika Zibanejad deflected past Howard for a one goal lead.

The Wings had a pretty decent comeback as they raced down the ice, getting quite a few quality chances. Lundqvist was spectacular with a pivotal glove save on Tatar that kept the game in his team’s favor.

About halfway through the period, Mats Zuccarello made a terrific pass to Kevin Hayes as a two on one was developing. Despite the great pass, Hayes missed the open net. However, this set the Rangers up for a lot of chances.

Alain Vigneault mentioned that the Rangers are just, “…trying to put it together.” Well, it surely looked like that. He also mentioned how their execution was off last season, but he feels they’re back at it right now.

Hayes had another great chance later in the period. He waited for the defenseman to slide on the ice in an attempt to block the shot before getting a clear shooting lane. He ended up shooting the puck almost directly at Howard, and he came up with yet another save.

The Red Wings’ best chance of the period came when a slap shot from the point sailed wide of Lundqvist. Hank was misplaced, and Nielsen had a wide open net. He waited too long to shoot because he wanted to use his predominant left hand, and The King got the pad there in time.

Arguably the best chance for the Rangers came from yet another pass by Zuccarello. He lopped the puck onto Vesey’s stick, and he sped away on a breakaway. Catching his own rebound, Vesey was still unable to put one past the opposition’s netminder, and the puck slid across the crease with no one to tap it in. Shortly after, the crowd went wild as they thought the puck went in. Upon review, it was clear to see that it just dinged the inside of the post. Poor Zucc, he deserved that one.

The main point to take away from that first period by the New York Rangers was their puck possession, slick stick-handling, and most importantly (in my opinion) their play in the neutral zone. Barely anything got by their blue line because every time they found a way to break up passes before they threatened the defense. This, in turn, allowed the offense a lot of time to move the puck and find open lanes.

Zucc got called for tripping, even though it seemingly looked as if there was a dive. In any case, Michael Grabner took advantage of a blocked shot and ended up getting the best chance of either team on the penalty kill. His breakaway was stopped by Howard, but that wouldn’t be his

only huge save of the next few minutes. Shortly after, Nash powered forward on a breakaway, and Zuccarello tried to put in his rebound past Howard but was denied the goal. Almost unbelievably, Ryan McDonagh nearly had a breakaway of his own and caught his own rebound. Somehow, it was still a one goal game.

The Rangers took another penalty, and this time, it was Tomas Vanek with a deflection in front of Lundqvist that tied the game up at one. This one was especially disappointing for the Rangers because the game could have easily been 3-0 in their favor at this time.

Due to too many men on the ice, the Rangers were able to go on their first power play of the night. With 55 seconds left in that one, the Red Wings took another penalty for hooking Hayes. The 5 on 3 saw chance after chance, but they were unable to convert. Still on the second power play, though, the opposition took yet another penalty. And again came a brief 5 on 3, and the power play unit didn’t capitalize on their long opportunity.

The away team had a great chance as they tried to go top shelf on Lundqvist. He robbed them of the goal with a fast shoulder save but didn’t know where the puck was. Eventually, a teammate helped Hank stop the play.

Zuccarello made a nifty pass to Captain McDonagh in front of the net, and despite a save, the puck came back to Vesey, but Howard sprawled across the ice and got his stick over just in time to keep the puck out.

It’s hard to even describe that second period of hockey, where the Rangers had so many chances, yet somehow someway, nothing made it past Howard. Thirteen shots on goal were recorded by the boys in blue in that period alone, to the opponent’s seven.

59 seconds into the period, Lundqvist couldn’t control the puck behind the net, and he left the net wide open for the Red Wings’ Miller to score. They then proceeded to hound the Rangers’ goaltender in the next few minutes.

For their fourth power play of the night, the Blueshirts were still unable to convert. Next it was the Red Wings’ turn for the man advantage, which became a 5 on 3 for 1:23. The Rangers held them off well, though.

Jesper Fast thought he had the game-tying goal, but after review, it was clear that it was put in with a high stick. And it remained two to one.

Overall, to this point, this is the most disappointing loss of the season. It was very similar to the loss to the Blues, where they had an enormous amount of shots and shot attempts. The story in this one comes down to one player- Howard. He was definitely the best player on the ice. The home team had six breakaways in the game, and he stopped them all.

On an extremely positive note, I believe if the Rangers continue to play the way they’re playing, they will have a lot of success. This was not a lack of skill and most definitely not a lack of effort. They did everything they could, and this could have easily been a blowout game for them. The Red Wings got lucky, between Lundqvist’s mistake behind the net and the high stick by Fast to negate the goal.

Don’t be concerned about this team. They’re on the right path, and they’re playing extremely well despite having two in each column of their record. Also, in Kevin Klein’s return, he looked like himself and was solid throughout the game. Their next matchup is against the Washington Capitals on the road. Be sure to catch the action on the NHL Network on Saturday at 7.

← Rangers take on the Red Wings in Original Six battle; Klein back in the lineup
No need to worry, the Rangers are much better than their .500 record →