← Raanta starts in net for the first time in a month as the Ranger battle the Kings
Rick Nash now week-to-week; Does this change the Rangers deadline approach? →

Rangers lose barnburner in OT to the Kings 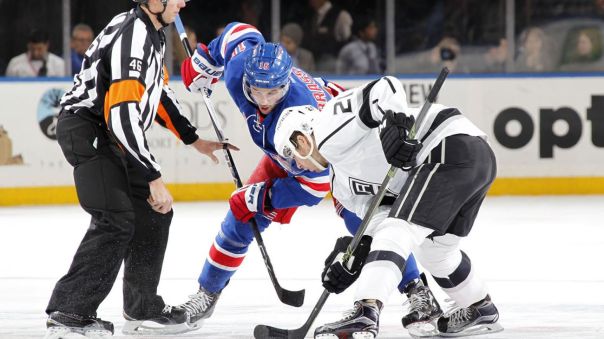 Tickets were worth the price of admission in what turned out to be a 5-4 loss to Anze Kopitar and the LA Kings.

A duel between backup goalies, both whom have not played in NHL action for an extended period of time, made for a high scoring affair in which Peter Budaj made one more save than Antti Raanta in OT.

The Rangers went down two goals early but battled back only to lose the lead late in the third. They would then lose the second point on a goal scorers goal from Tanner Pearson in the 3 on 3 overtime. This one was a high-paced affair that got off to a fast start when Anze Kopitar scored his first of three goals after Marc Staal arrived late for the 7:08 puck drop and had a really bad first shift. After Staal wasted an opportunity to exit the defensive zone with ease, he stood like a statue in front of Kopitar, who had all the time in the world to pick a corner and put the Kings up in the first minute of the contest.

The Rangers had a tough start to this one. They struggled with LA’s size early and were sloppy on the couple of odd man rushes they had. Marc Staal added to his banner start by flipping a puck over the glass and putting the NHL’s number one road power play on the man advantage.

Marian Gaborik found a soft spot in the slot as Rangers penalty killers appeared to have miscommunicated, and Gabby thanked the Blueshirts by snapping the puck home for a 2-0 lead. Dan Boyle left Gaborik and on replay could be seen gesturing to the other defenders to pick up the Slovak sniper, but Boyles request went unanswered.

The Rangers responded after the Gaborik goal with a jump in their step and a newfound drive when playing the much bigger LA Kings along the walls. They were rewarded with just over 7:00 left in the first when Victor Stalberg got the Rangers on the board. Oscar Lindberg beat a Kings defender to the puck in the corner and from there, tapped it behind the net to Kevin Hayes, who bumped it right into Stalberg’s wheelhouse on the backhand. This added to Hayes’ team lead in primary assists. Hayes is tied for 7th in the league in primary assists since he entered the league last season, up there with the likes of Tyler Seguin, Ryan Getzlaf, and Anze Kopitar. Good stuff from the sophomore.

The first period ended with shots on goal tied at 11, but the momentum was shifting.

The second frame opened with sets of 200 foot dashes in both directions culminating in Chris Kreider’s shot off the post in similar fashion to the post he hit in overtime of the Stanley cu-.. ugh never mind. Derek Stepan tied the game at 2 when the puck squirted out of the corner and was picked up by Step, who took it to the net and went five-hole on Petr Budaj. Stepan seems to always come up in big spots for the Rangers when they need a play. He may not be the most talented player in the league, but he is just as hockey smart as anyone out there. Stepan excels with and without the puck on his stick. He has been a steadying presence for the Rangers over the last few seasons and at times we forget that he is still just 25 years old.

Matts Zuccarello would kick off what turned out to be a big night for him when he gave the Rangers the lead off of a fluky bounce in front. You could argue the Blueshirts deserved a bounce for the way they had responded after going down 2-0 early and getting pushed around all over the ice. Zucc currently leads the team in goals, with 19. Petr Budaj let the rebound get away from him and it bounced in off of a Kings defender. The goaltending in this game certainly left something to be desired but it made for a real exciting game. 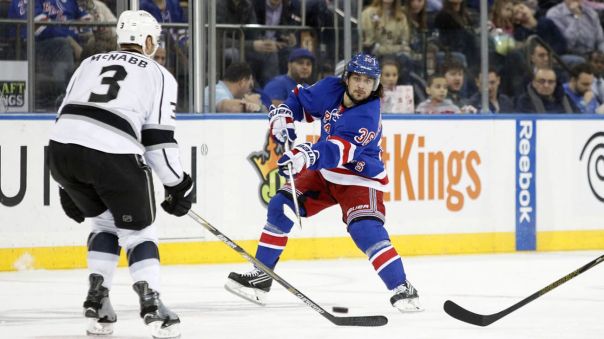 In my eyes, the line of Zuccarello-Stepan-Kreider was the best line for the Rangers all night. They had offensive possession time and generated multiple odd man rushes with defensive zone plays.

On the Kings third goal, JT Miller picked up a loose puck in the defensive zone and the Rangers appeared to have numbers going the other way. His attempted pass to an open winger took a bad bounce off of a skate and landed right on the tape of Milan Lucic’s stick. Lucic nutmeg’d Marc Staal and Anze Kopitar had an easy tap in for his second of the night. Nothing you can really do on a play like this but hope the goalie makes an acrobatic save, something Antti Raanta couldn’t come up with tonight.

Raanta admitted to reporters postgame that he was nervous. Beat writers reported post game that Raanta had taken the loss really hard. “I feel like I’m there but the reaction isn’t…The last four minutes felt like forever.” Raanta, understandably so, had some rust to shake off but made some big saves for the Rangers, and almost got his team two points. AV said after the game “Being a backup goalie is a hard job” and added he is confident Raanta will be better than he was tonight in his next start. For Raanta’s sake I hope he’s right. 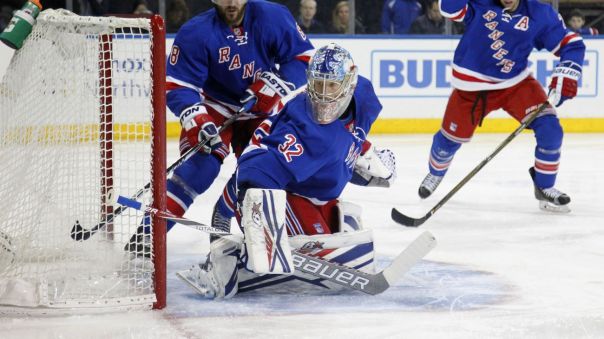 Kevin Hayes came up with another game changing play when he finished a beautiful feed from Matts Zuccarello with the Rangers on the power play for a 4-3 lead. Zuccarello, who plays like he’s approximately a foot taller than he actually is, used his body to get around a Kings defender before shoving a pass right onto the stick of Hayes for a tap in. This was the result of a lob pass out of the defensive zone from Keith Yandle.

It is admirable to see Zuccarello making a difference night in and night out. Like the Steph Curry of the NHL, he defied the odds when he came over from Europe and stuck in the Rangers lineup under Alain Vigneault, and is defying the odds now as one of the Rangers top forwards and go-to players in crunch time despite being a mere 5’7, if that.

Who could’ve expected a game between the Rangers and the Kings to not involve a late third period game tying goal? Just like in 2014 when the Kings beat the… UGH never mind.

After a questionable icing call, Jeff Carter won a draw back clean to Drew Doughty, the puck eventually found its way to Anze Kopitar, going for the hat trick, and Kevin Klein was guilty of being in the wrong spot at the wrong time. The Kings tied it up on a fluky goal as the puck found its way off Klein and in. The shot would’ve gone two feet wide.

Alain Vigneault was asked about the icing call after the game and said he would prefer to stay away from commenting on referees and linesman, in a smug tone. It was obvious AV didn’t think much of the call, for good reason.

Tanner Pearson would go on to beat Antti Raanta glove side and give the Kings the OTW. Raanta absolutely could have made the save, and Dan Boyle was lost in no man’s land. This came moments after Derrick Brassard came oh so close to winning it with a Peter Forsberg like move, to which Peter Budaj denied with the left pad. It was Budaj’s first NHL win since 2014, so good for him.

Look, in an 82 game season tough loses like this are bound to happen. Tonight’s game showed me some really good things.

This is one of those losses where you look back and say tough break, and move on to the next one.

Also, Dan Girardi took a shot off of the upper knee that would have gone through my body, and he played the rest of the game. Danny G, a warrior indeed.

Rangers are back at it Sunday, in Philadelphia. GIVE ME BLOOD

← Raanta starts in net for the first time in a month as the Ranger battle the Kings
Rick Nash now week-to-week; Does this change the Rangers deadline approach? →