← Rangers could sign Buchnevich by this weekend; Moore and Staal not in future plans
Ranking the Rangers—Part One: 20-26 → 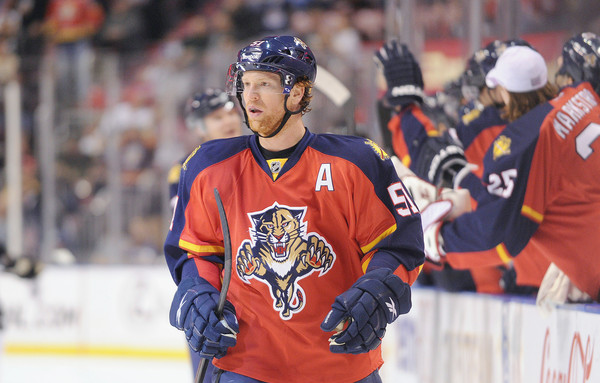 Just three days ago, the Florida Panthers announced that they had agreed to a one year deal with 24 year old defenseman Erik Gudbranson. On the surface, it didn’t seem like a big deal at all.

But signing Gudbranson means that the Panthers now have seven defensemen under contract (Ekblad, Gudbranson, Kampfer, Kindl, Kulikov, Matheson and Petrovic). The team is fully embracing the youth movement, going with a roster that is full of newer and younger players, and they’re keeping a select few veterans around.

One of the vets that now seems like a lock to leave Sunrise, Florida is defenseman Brian Campbell. “Soupy” has been one of the offensive leaders from the blue line in his five seasons with the Panthers, scoring 27 points or more in each season, and recording a career high 53 points (4-49-53) in the 2011-12 season. This past year Campbell scored six goals and 31 points in 82 games.

But this was the final year of an eight year contract that paid him over $7 million a season, and he’ll be turning 37 on May 23rd. The Panthers are using that money to lock down their younger players and hopefully sign some key free agents, so Campbell is on his way out as a result.

While it is time for the Rangers to make a youth movement similar to the Florida Panthers, Brian Campbell is a player they should not brush aside when addressing potential offseason moves. The team may be hesitant to bring aboard another veteran defenseman after the Dan Boyle experiment, but it would really help out the team.

First off, this can only happen if Jeff Gorton finds a way to trade/buy out either Marc Staal or Dan Girardi. Both of them can’t be on this team if they want to win, and it would free up some much needed cap space. Also, Campbell is not going to replace Keith Yandle, so the team should do everything in their power to keep him as well.

Campbell is an experienced veteran with a Stanley Cup to his name (Chicago Blackhawks – 2010), and the type of player that the Rangers need to employ on the blue line. Dave Shapiro wrote an excellent article on Blue Seat Blogs (LINK HERE) that discusses the need for Vigneault to change his defensive mentality, and Campbell is exactly the player that the team could use.

One of the biggest problems with the Rangers this past season was their inability to make that first pass out of the defensive zone. Yandle and McDonagh were the only two who did it consistently, while Kevin Klein was also okay at it. Many times, it resulted in lifting the puck out of the zone, sending it off the boards, or dumping it into the opposing zone. All three options almost always resulted in a loss of possession and the team had trouble creating consistent offensive pushes because of it.

Campbell is an excellent puck mover, and has been his entire career. He would be very helpful in the transition game and helping bring back that speed element through the neutral zone that the Rangers were lacking this season.

Campbell is also good for around 30 points a season, which would be a big help in the lineup. McDonagh, Yandle, Campbell and Klein could combine for around 120-130 points if they all stay healthy and play well, and a top four with those defensemen could be a really strong group. Picture this as a potential Rangers defensive group in 2016;

That’s a really solid group right there, full of guys who can skate, move the puck, contribute offensively and play defense well. Adding Campbell as well as using some of the younger players would create a group that can handle the puck-moving mentality that Vigneault’s system utilizes so well, and it would help address some of the biggest problems the Rangers had last season.

If the Rangers can package Marc Staal in a trade with Colorado for their 10th overall pick (@HockeyStatMiner talks about this), they could sign Campbell to a cheaper contract filled with performance bonuses to keep under the salary cap.

Brian Campbell isn’t a Yandle replacement, but could be a fantastic complementary piece that would help fix the Rangers biggest defensive problems.

← Rangers could sign Buchnevich by this weekend; Moore and Staal not in future plans
Ranking the Rangers—Part One: 20-26 →