The Rangers (25-12-1) came into Arizona to face the lowly Coyotes (11-20-5), but it was an extremely close game in Glendale, one that took four power play goals and a hat trick from Matt Puempel to secure a 6-3 victory.

Puempel scored all three goals on the power play, becoming just the third Ranger to score a power play hat trick since 1986. Marc Messier (3/22/92) and Mike Gartner (1/31/94) were the other two. It was also his first career hat trick.

This was a mixed bag for the Rangers. They did a lot of things right. The offensive effort was strong, with the Rangers generating a lot of quality chances and shots, the power play running at full efficiency, and all four lines playing well in both zones. But they allowed the Coyotes to hang around and chip away at their lead until they tied the game at three. The defensive effort wasn’t all that great either. Realistically, this should have been an easy win, but the way they played at times made it difficult on themselves. END_OF_DOCUMENT_TOKEN_TO_BE_REPLACED

The Rangers (24-12-1) came out of the Christmas break with a huge come-from-behind win over the Ottawa Senators, and look to keep on rolling as they take on the Arizona Coyotes (11-19-5) in Glendale, AZ.

This marks a matchup between one of the league’s best teams, and one of the league’s worst. The Coyotes have fewest wins and the second fewest points, struggling with injuries and an extremely young roster. The Rangers have also had to deal with a pretty significant amount of injuries among the forwards, but their depth and talent has kept them afloat.

This two-game road trip for the Rangers has them facing the Coyotes and the Avalanche, the two worst teams in the league. After that they take on the Sabres and the Flyers, so this presents a big opportunity for them to pick up some points they’ll need down the line. END_OF_DOCUMENT_TOKEN_TO_BE_REPLACED

Rangers finish back-to-back series with Coyotes at the Garden 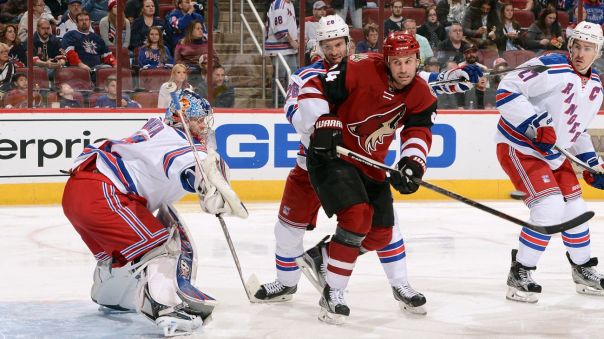 The Rangers (3-2-0) don’t have much time to revel in their comeback victory over the Capitals, as they are back at Madison Square Garden tonight to battle the Arizona Coyotes (1-3-0) on Hockey Fights Cancer night.

A goal from Brandon Pirri and two from Jimmy Vesey gave the Rangers a second period lead over the Capitals, and Henrik Lundqvist did the rest with a strong 26 save effort for his second win of the season. Zibanejad picked up one assist, as did Ryan McDonagh to give him four points in five games.

The Coyotes last played against the New York Islanders, falling 3-2 in regulation. Brad Richardson scored his second goal of the season, and Radim Vrbata scored his first of the season since coming back to the Coyotes. Louie Domingue made 28 saves. END_OF_DOCUMENT_TOKEN_TO_BE_REPLACED

Normally, this is where an article would begin to criticize the player for his play, what he isn’t doing enough of and what, in this case, Yandle would need to do better.

It’s true. Yandle hasn’t been doing enough. But it’s not his fault.

Make it 5! Rangers take down Coyotes thanks to Raanta’s goaltending

The Rangers (10-2-2) continued their domination of the second leg of back-to-back games, sweeping the season series against the Arizona Coyotes (6-6-1), winning both games of their two game road trip and improving their record on the road to 4-1-1.

Although the Rangers haven’t really played their best hockey yet, they’ve been very consistent in collecting points and wins. They’ve gained 16 of a possible 18 points in their last nine contests, going 7-0-2 in the span, and a season-high five game winning streak has earned them a pretty comfortable seat atop the competitive Metropolitan Division standings, where they’ve posted a 10-2-2 record (22 points).

In the last 16 back-to-backs, the Rangers have improved their record to 14-1-1 in the second game. They’re also 158-1-9 when taking a lead into the third period, a streak dating back to February 6, 2010. END_OF_DOCUMENT_TOKEN_TO_BE_REPLACED