← Rangers head to the desert to take on the Coyotes; Yandle makes first return to Glendale
Alain Vigneault is not using Keith Yandle effectively →

Make it 5! Rangers take down Coyotes thanks to Raanta’s goaltending 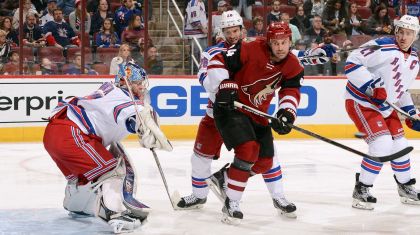 The Rangers (10-2-2) continued their domination of the second leg of back-to-back games, sweeping the season series against the Arizona Coyotes (6-6-1), winning both games of their two game road trip and improving their record on the road to 4-1-1.

Although the Rangers haven’t really played their best hockey yet, they’ve been very consistent in collecting points and wins. They’ve gained 16 of a possible 18 points in their last nine contests, going 7-0-2 in the span, and a season-high five game winning streak has earned them a pretty comfortable seat atop the competitive Metropolitan Division standings, where they’ve posted a 10-2-2 record (22 points).

The Rangers are a fast team, known to “skate teams to death”, and the Coyotes tried hard to match their speed. Sometimes, though, too much speed leads to penalties, and Michael Stone got called for high-sticking against Brassard. The first power play went to the Rangers, and though they were unable to convert, it had some good looks, especially from the second unit. As mentioned by Alain Vigneault, power plays aren’t only about scoring; sometimes it’s about momentum. So if the Blueshirts can’t score on the power play, maybe the strategy is to score a few minutes later.

Good checking along the boards allowed the puck to slide onto Girardi’s stick. He wasted no time taking his strong slap shot, which was deflected in front by rookie Jesper Fast, and the Rangers took the one goal lead exactly eight minutes into play. But Fast was just the first of what would end up being a kids’ day for the Rangers. 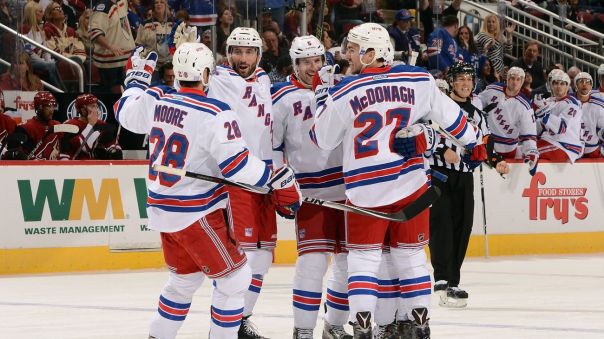 It was the Rangers turn to go on the penalty kill, and it was a tough one to kill, but they did an excellent job, particularly in blocking shots. Inside the final seconds of the Coyotes’ power play, Raanta made a constellation of saves, and the only shot that eluded him was rapidly swept away by Dan Girardi. In his clearing attempt, he nearly dinged the puck off the post and into the net, but luck had it that the puck went just wide enough for Girardi to breath a huge sigh of relief. It was an excellent heads up play that kept the game in favor of his team.

Yes Rangers’ fans, even King Henrik needs a break every once in a while, but when you have a backup as good as Raanta, there’s no reason to start sweating. Antti Raanta came up with some big saves late in the first, keeping his team at the one goal advantage. He made 14 saves in the first period alone, many of them coming on Arizona’s power play.

The second period started out fast for the Rangers. Kreider got checked from behind, but it was JT Miller with great positioning who had the puck go off his skate and past Smith 2:07 into the middle period. In Boyle’s return after being a healthy scratch, he registered an assist on this goal.

The Kreider-Stepan-Miller line was not even close to being done for the night. Stepan took advantage of a beautiful glove save by Raanta and poke-checked the puck away from the Coyotes’ defenseman and onto the waiting stick of Chris Kreider, and it was off to the races. Kreider used his unstoppable speed, but once he was over the Coyotes’ blue line, he took a weak shot. Smith, though, did not get the pads together in time. It was 3-0 Blueshirts, and Anders Lindback replaced Smith due to his shaky performance. He had given up 3 goals on 17 shots.

Later in the period, JT Miller got checked in the face by Richardson, resulting in a double minor. The Rangers capitalized on the second half of the elongated four minute power play, as Kevin Hayes’ wrist shot soared by Lindback’s shoulder, putting his team at a comfortable 4-0 lead. In his first time back in Arizona since being traded to the Rangers, Keith Yandle registered an assist on Hayes’ goal, and Oscar Lindberg received a secondary assist.

With about four minutes to go in the second period, Lindberg took a high-sticking penalty against Shane Doan, but the strong penalty killing of the Rangers came through once more. They finished the period with 10 shots on goal to the Coyotes’ 9. That’s not to say that the Coyotes’ shots were weak. Raanta was stellar for the Rangers and has been in every game he’s played thus far this season.

By the time the third period was underway, you might have thought the Rangers’ mindset was defense only, but it was far from it. The Rangers had five shots on goal just about five minutes in.

Ryan McDonagh, who up until this point had played a nearly perfect game, was guilty of taking a tripping penalty against Rieder. Hanzel tipped the puck in from an Ekman-Larsson shot, and the original ruling on the ice was a goal. However, after thorough review of the play, it was ruled that Hanzel’s stick was over the crossbar when he tipped it in. A frustrated Coyotes’ bench questioned the call, but play resumed with the Rangers up by four.

Chris Kreider had a similar opportunity as his first goal in the middle of the third period off another feed from Stepan. Lindback’s strong play was enough to keep the power house from getting a third point on the night.

Raanta’s shutout streak was broken with a mere 4.6 seconds left. A two on one created a chance for Shane Doan who scored his third goal of the season on a pass from Hanzal. Unfortunately for Coyotes’ fans, most of them missed their team’s lone goal because many of them had already left the building. All in all, it was an incredible night for Antii Raanta, who finished with 39 saves. He improved his save percentage to .976 and has only let up two goals in three games he has started in as a New York Ranger.

Antti Raanta finished with 39 saves on the night. Photo courtesy of Getty Images.

It was an emotional night for Keith Yandle, as Coyotes’ fans commemorated his time with them, but Yandle played a solid game, both offensively and defensively.

Zuccarello continues to impress with his strong physical play, great passing ability, and smart decision making. Though he didn’t record a point tonight, you can be sure the Norwegian Hobbit will continue his amazing play.

Kreider put up a goal and an assist on the scoreboard last night. Hopefully this gives him momentum heading into Tuesday night. It’s been said that he could be one of the “elite” players in this league, and he intends to prove his abilities to Coach Vigneault.

The Rangers have swept their two game road trip, scoring 6 goals and giving up only 2. They look to defend their home against a developing divisional rival, the Carolina Hurricanes, on Tuesday night. The Blueshirts are currently 6-1-1 at The Garden and have won their past five straight at home. Game time is back to 7:00pm, so don’t miss the action. Coverage begins at 6:30 on MSG 2.

← Rangers head to the desert to take on the Coyotes; Yandle makes first return to Glendale
Alain Vigneault is not using Keith Yandle effectively →