The Rangers opened their preseason games with a bang, securing a 5-2 win in a pretty dominant outing over the New York Islanders. There were a lot of positives to take from this game despite it being against a split Islanders squad.

The offseason moves seem to already paying off, and the Rangers played differently than they did last year based on their personnel. For the preseason I won’t be doing goal breakdowns or a period-by-period summary, but instead a bullet list with observations.

END_OF_DOCUMENT_TOKEN_TO_BE_REPLACED

In last year’s NHL Draft, the Rangers selected 6’3” Slovakian goaltender Adam Huska with their seventh round pick, a selection that people didn’t think twice about considering the talent the Rangers already have in their goaltending prospect pool.

Brandon Halverson was considered the brightest goalie prospect in the Rangers organization, winning 40 games with the Sault St. Marie Greyhounds last season in the OHL, and getting regular reps with the USA Juniors team. Mackenzie Skapski was an excellent goalie in the AHL last season, making two NHL starts before a hip injury caused him to rehab for most of this year. Add that with Magnus Hellberg, the goalie prospect acquired from the Nashville Predators in the offseason, and the Rangers are stacked.

So it’s understandable why nobody batted an eye when the Rangers took Adam Huska with the 184th pick of the draft last season. But after being selected, he played well for Slovakia in the WJC, carrying that momentum into an excellent first full season with the Green Bay Gamblers of the USHL. END_OF_DOCUMENT_TOKEN_TO_BE_REPLACED

The Rangers practiced today ahead of Game 2 against the Penguins tomorrow, and Henrik Lundqvist was back on the ice in full gear, practicing with the rest of the team. Dan Girardi was absent, and it was revealed by Alain Vigneault that he would not play tomorrow due to an injury.

The Rangers recalled goaltender Magnus Hellberg from Hartford yesterday just in case they got bad news about Lundqvist. But after seeing a specialist, there is no real damage to his eye, and the concern is about the swelling around his eye (per John Shannon). Lundqvist said his vision was blurry after the incident, but got better as the night went on. Andrew Gross of The Record said that Lundqvist looked sharp in practice.

Henrik Lundqvist will be a game time decision. END_OF_DOCUMENT_TOKEN_TO_BE_REPLACED 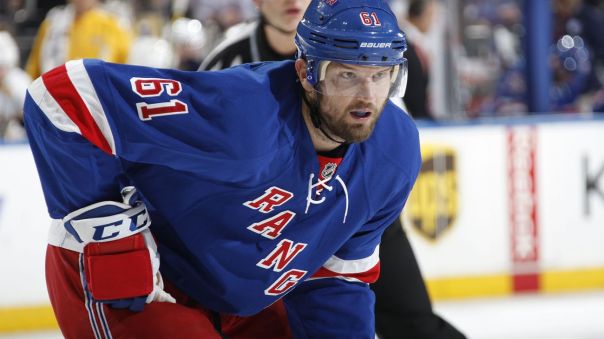 The Rangers practiced today ahead of their road game against the Buffalo Sabres tomorrow night. And it seems like they’re very close to getting two of their key players back. Rick Nash and Henrik Lundqvist both skated with the team and it looks like they’ll be back soon.

Lundqvist has missed the last two games with neck spasms after colliding with Ryan McDonagh in the game against the Penguins. He was on the ice and participated in drills, but he will not travel with the team to Buffalo. However, he said that the plan is to “be ready for the weekend.”

Nash practiced in a non-contact jersey, marking the first time that he skated with teammates since his injury back in January. He also won’t be traveling to Buffalo, marking the 20th straight game he will be out, but the good news is that his status has been upgraded from “week to week” to “day to day.” END_OF_DOCUMENT_TOKEN_TO_BE_REPLACED

This is the third out of four games between the Rangers and Islanders, and the first game at MSG this season. The last five encounters have all been played at the Islanders’ home; three at the Nassau Coliseum and two this year at the Barclays Center. The Rangers are 0-1-1 this year against the Isles, losing 2-1 in a shootout in December and 3-1 on January 14th. END_OF_DOCUMENT_TOKEN_TO_BE_REPLACED