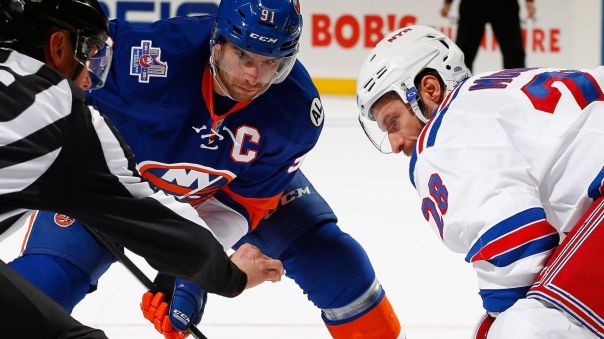 “Know the foe” will be a series of posts in which I examine some of the Rangers likely playoff opponents. Up first, who else but the cross town rival New York Islanders.

Starting this playoff matchup preview series wouldn’t feel quite right if it were about any other team. The Rangers are 0-2-1 against the Islanders so far this year. They play again once more in the regular season: April 7 at MSG, the second to last game of the season. Each of the Blueshirts losses to those pesky Isles has been equally frustrating with the pain coming in different ways each time.

On Dec. 2 the two teams met as NBC’s Wednesday Night Rivalry matchup, a game that saw the Islanders win in a shootout, 2-1. Henrik Lundqvist was outstanding, making 37 saves and letting but one puck squeak by him in the shootout. This was a highly anticipated game–the first visit to the Barclays Center for the Rangers. END_OF_DOCUMENT_TOKEN_TO_BE_REPLACED

This is the third out of four games between the Rangers and Islanders, and the first game at MSG this season. The last five encounters have all been played at the Islanders’ home; three at the Nassau Coliseum and two this year at the Barclays Center. The Rangers are 0-1-1 this year against the Isles, losing 2-1 in a shootout in December and 3-1 on January 14th. END_OF_DOCUMENT_TOKEN_TO_BE_REPLACED

Rangers suffer late collapse in defeat to Islanders, slip to third in the Metropolitan 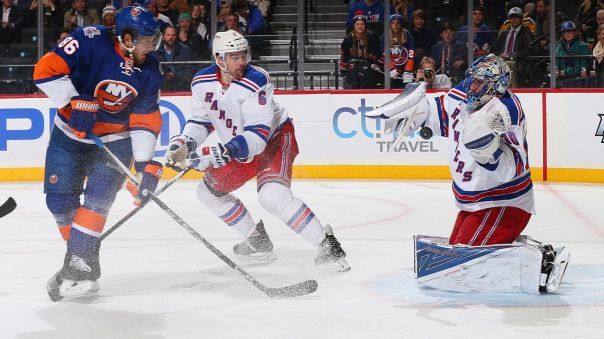 Photo courtesy of the Getty Images.

What’s worse? They totally deserved to win tonight. They Dominated, with a capital D, for the first two periods, and Jaroslav Halak stole the show. Three bad minutes in the third period undid everything they did in the rest of the game and handed the Rangers their 15th loss in the last 22 games. END_OF_DOCUMENT_TOKEN_TO_BE_REPLACED

Capitals vs. Islanders: Who would you rather face?

The Rangers are waiting for the winner of the Capitals-Islanders series to emerge, with Game 7 coming on Monday. Who would they fare better against? Photo courtesy of MSG Photos.

With their win on Friday, the Rangers became just the second team to clinch a berth in the second round of the 2015 Stanley Cup Playoffs, and the first team in the eastern conference to do so. Every other team in the East is still battling it out while the Rangers get some precious time off to heal and relax.

The Ottawa Senators are attempting to complete a comeback against the Montreal Canadiens, down 3-2 but with the series heading back to Ottawa. The Tampa Bay Lightning find themselves in a surprising 3-2 hole to Detroit with the series going to the Joe Louis Arena for Game 6.

But the series that Rangers fans care about the most is the Washington Capitals against the New York Islanders. The Rangers will take on the winner of that series, which is still being played. END_OF_DOCUMENT_TOKEN_TO_BE_REPLACED

Cam Talbot and the Rangers fourth line stole the show, providing the spark the Rangers needed to get past the Panthers. Photo courtesy of MSG Photos.

The Rangers (44-17-7) managed two survive 40 minutes of swarming Florida Panthers (31-24-14), earning their fifth straight win thanks to strong play from the fourth line and superb goaltending from Cam Talbot. New York skated away with a 2-1 home ice victory.

With the win, the Rangers improved their record to 44-17-7, with a 14-1-3 record in the last 18 games. Since December 8th, the Rangers are 33-7-3, propelling them to five points ahead of the Islanders in the division, and first place in the entire league.

Tonight marked the first time in franchise history that the Rangers have allowed one goal or fewer in regulation in seven straight games. END_OF_DOCUMENT_TOKEN_TO_BE_REPLACED