In a move to combat the head injuries and concussions that have plagued the sports world recently, the NHL will begin mandating league-designated and trained spotters for every single game this season. 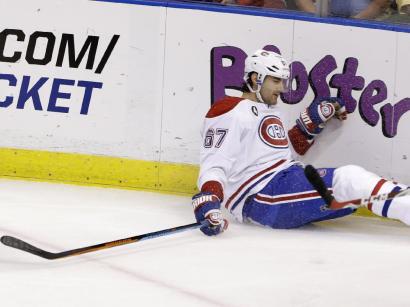 Max Pacioretty lies dazed after a big hit in a game against the Florida Panthers. (AP Photo/Wilfredo Lee)

There will be two spotters at every game, one for each team. They will be sponsored and trained by the league. However, each team has the right to designate their own concussion spotter for each game. This may be preferred, because that person would have the team’s best interests in mind, and they would know the players and their tendencies well.

According to Bill Daly, the NHL deputy commissioner, most teams have indicated that they’d prefer to go with a team-sponsored spotter, but having the league-mandated spotters gives teams another possibility. If the team spotter gets sick or can’t make it, there will be backups in a sense. (LINK)

Unlike the NFL, the spotters do not have the same power as they do in football. NFL concussion spotters have the power to stop a game and remove a player if they are showing clear signs of a concussion. This is known as the Julian Edelman Rule, named after the New England Patriots wide receiver. In the Super Bowl, Edelman took a nasty hit and appeared woozy, but stayed in the game to make some key catches, despite a spotter calling down to the sideline and asking for him to be removed.

The NHL spotters will not have this same power. They will have a two-way radio to communicate with the team trainer, and notify them if they see any signs of a possible concussion. But in the end, it’s up to the trainer and the player to make that decision.

The NHL has felt the impact of head trauma injuries recently. Recently, New Jersey Devils forward Ryan Clowe announced his retirement as a result of issues from ongoing concussions. Johan Franzen was just cleared to play a week ago despite still feeling effects from a concussion a few weeks prior to his clearance. And ex-NHL enforcer Todd Ewen died this past weekend after committing suicide, one of the many former enforcers that have died over the past few years.

This is a much needed measure taken by the NHL, and head injuries are not to be taken lightly. They can and have impacted players long after their playing days are over, and it’s time that teams take these types of injuries more seriously.