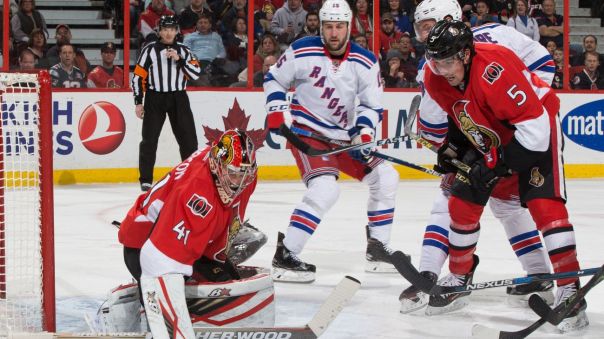 The first win streak in two months is already over for the Rangers (26-17-5).

After winning back-to-back games, the Rangers couldn’t string together another strong performance, never seeming to get their offense together against the Ottawa Senators (23-20-6).

Alain Vigneault’s squad looked really flat. The 35 shots on goal is deceptive because the offense just didn’t have it tonight. Not many of those shots were quality scoring chances, and they didn’t pressure Anderson enough. You could maybe blame the fact that they didn’t skate in two days, as well as the flight schedule being thrown off track, but this performance was inexcusable.

The first period did not start well for the Rangers. They were slow out of the gate and they struggled to connect on basic passes, leading to them misfiring on outlet passes and transitions. After not practicing yesterday and missing the morning skate because of the early start, the Rangers didn’t have their legs going early on.

Henrik Lundqvist made some big saves early when the Rangers were struggling. Some good passing from Ottawa led to a wide open shot for Matt Puempel, but Lundqvist got a blocker on the wrist shot. Later on the Senators power play, he made an excellent right pad save on Mark Stone’s redirection.

Later in the period, the Rangers got their own chance on the man advantage. They didn’t score, but they did generate a lot of momentum off of it. They controlled the puck at the point, cycled the puck well and got a lot of shots on goal. After trailing in shots 12-5, New York got eight on goal to finish a scoreless first period up in shots, 13-12.

The second period started out just as frantic as the first. Lots of rushes, lots of crisp passing and chances for both sides. The Rangers really upped their tempo here, and they kept the puck away from the Senators for most of the time.

The Rangers had the first quality scoring chance, and Kevin Hayes should have scored a goal. Keith Yandle dumped the puck into the zone, Jesper Fast chased it down and made a great play to draw Craig Anderson out of the net. He skated behind the net, set up Hayes for a shot into the empty net, and he whiffed on it. Granted, the puck was in his skates, it wasn’t the greatest pass, but that’s one you have to put away.

With the period coming to an end, Ottawa scored the first goal of the game with just 19.9 seconds remaining. Jared Cowen blasted a slap shot off of the post, and Bobby Ryan outmuscled Kevin Klein in front of the net to put home the rebound. The goal was his 17th of the season.

Henrik Lundqvist had to make one more big save on Max McCormick, and the period came to a close as Tanner Glass had a hold of Chris Neil and McCormick. The Rangers trailed 1-0 and were being outshot 23-21.

The Senators opened the final period the same way that they closed the last one; with a goal. Dominic Moore sent a backhand on net, and Tanner Glass couldn’t get his stick on a loose puck in the crease, into what would have been an open net. Mike Hoffman carried the puck into the Rangers zone on a 2v1, and sent a perfectly placed wrist shot over the shoulder of Henrik Lundqvist, doubling Ottawa’s lead.

That’s where the Rangers could use an improvement over someone like Glass. He’s been attacking the net much more since being recalled, but he doesn’t have the skill or hands to capitalize on the loose pucks and rebounds. It hurts the team and the fourth line.

The third period was pretty uneventful. The Senators were focusing more on their defensive play and the Rangers couldn’t get any momentum going offensively. Henrik Lundqvist was really sharp throughout, finishing with 30 saves.

New York had a power play opportunity late, and McDonagh and Boyle were out there to start it. Because that’s been working right? Anyway, McDonagh whiffed on a pass, practically handed the puck to Jean-Gabriel Pageau, and he shot it into the empty net as Lundqvist was coming off of the ice.

The score would finish 3-0. Anderson made 35 saves for a shutout win, although the Rangers really didn’t test him that much.

Alain Vigneault’s decision making continues to puzzle me. Late in the third period, the fourth line were getting some consistent shifts. Despite the team trailing 2-0. We all saw what Keith Yandle can do when given a lot of ice time (Offensive domination against Vancouver), but he only got 18:55 of ice time while Dan Girardi skated for 22:15. When the team is trailing, why isn’t AV using his best offensive defenseman?

Also, the power play stunk again. And guess who didn’t start on the first unit? Yup, it was Yandle who got the scraps on the man advantage. This team has scored just once in their last 31 power play opportunities, yet nothing has been changed. Not the structure, not the playmaking, and not the personnel. It’s puzzling.

The Rangers will play tomorrow night against the Buffalo Sabres before the All Star break.