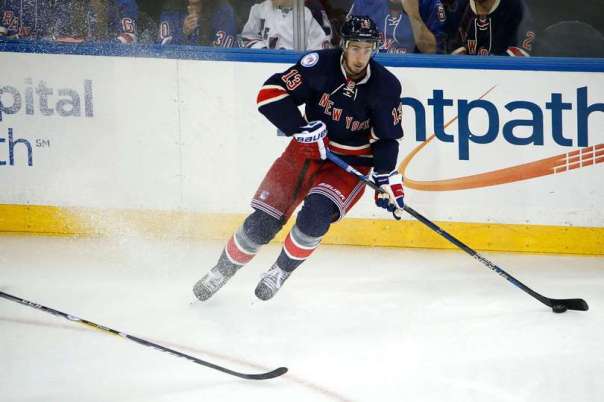 For years now, the NHL has regarded the All-Star Game highly. Kevin Hayes deserves a spot on the roster due to his excellent and consistent play with the New York Rangers so far this season.

After a seemingly lackluster performance last season, there was a lot of grief among the fan base and calls for him to perform better. When he started his career with the Rangers, he opened up with 45 points in his rookie season. To the chagrin of many, including coaches and fans alike, Hayes played the same amount of games, while only producing 36 points and three less goals (14). He was forced to listen to talks of trades and rumors of not maintaining a spot on the roster. But has he ever proven everyone wrong this season.

In just 36 games, Hayes has managed an impressive 23 points, including eleven goals and twelve assists. He is already on track to finish the season better than any he’s played before, and it’s not only limited to point production. His faceoff percentage has gone up by over ten percent, now operating at around a respectable 47%. And let’s not forget that his shooting percentage is a big reason why his game is functioning overall at a better pace, as it has increased from 10.5% to 19%.

On top of that, he’s been more of a consistent threat as well. Most of the time he’s on the ice, he’ll make his presence felt by showcasing his skills with the puck. He’s become much better at setting up plays, generating scoring chances, maintaining possession and using his creativity to his advantage. If he keeps improving and developing as a playmaker, he could keep progressing and moving towards a true top six player, as well as maybe even becoming the Rangers best passer and set-up man.

Since the All-Star game is an obvious next level up for any player who is chosen to participate in it, it makes sense that Hayes should experience it. He has proven himself time and time again this season and has come up big for the Rangers at key points. This is why he deserves this special opportunity to show how he matches up against the stars of the league. It is key for a young player such as Hayes to participate in this event to gain knowledge of how to play against superior players.

Experiencing the All-Star game puts an exclamation point on the redeeming season he has been playing. Not to mention, the reward of this involvement will hopefully encourage him to have a great second half of the season. Kevin Hayes deserves a chance to prove himself worthy of moving up to the next caliber of play, and this is a perfect way to do so.