Trading Grabner before the expansion draft might be necessary 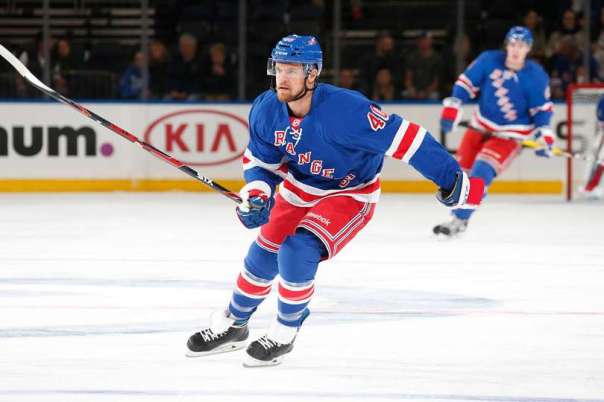 Out of all of the new additions the Rangers added to their team this offseason, Michael Grabner has blown expectations out of the water. Along with defenseman Nick Holden, these two have helped provide offense and consistent two-way play on cheap, cap-friendly contracts.

When Grabner was signed to a two-year deal, it seemed like he would wind up being a fourth line player who is great at killing penalties and could chip in with some offense. The stories about how he scored 34 goals in his rookie season, 20 goals another year and then 16 goals in the 2012-13 lockout season popped up, as did the ones about how he was fast but couldn’t score on breakaways or finish his chances.

Fast forward to today, and Michael Grabner leads the team with 19 goals after being awarded a hat trick in the Jan. 7 win over the Blue Jackets. That was his second hat trick of the year, and he now has more goals than Evgeni Malkin, Joe Pavelski, Connor McDavid, James Neal, Phil Kessel and more.

That’s pretty incredible considering the fact that there was a debate about whether or not Grabner would make the team after a strong preseason from many forwards. Instead, he wound up becoming one of the most important sources of offense this season.

At the rate he is scoring, Grabner will score about 35 to 38 goals this season. Every single one of his goals has been scored at even strength, which is remarkable. His offense has been needed in the absence of guys like Rick Nash and Mika Zibanejad, and he has certainly stepped up when called upon, playing well in a top-six role.

Despite all of that and how well Grabner has been playing this season, the Rangers definitely need to consider trading him at the deadline. While that might seem crazy given his importance to the team so far, there are a couple of factors that make a trade seem very logical, perhaps even necessary.

While Grabner has shown signs of being a quality goal scorer in the past, this season probably isn’t the “norm” we should expect. His current shooting percentage of 22.1% is almost ten points higher than his career average. Chances are he won’t keep that up in future seasons, even if he is only 29 years old. Grabner might be in the midst of a “fluke” season.

As of right now, Grabner’s trade value is as high as it’s ever been. There’s a good chance that he’ll cool down at some point this season, and his skillset (speed, great defensive player, penalty killer) means that teams desperate for a goal scorer at the trade deadline will pay crazy amounts for a speedy goal scorer.

Over the past few seasons, the Rangers have been buyers at the deadlines, and have given up a ton of draft picks and prospects for playoff runs that ultimately didn’t amount to a championship. Brady Skjei, who was drafted in 2012, was the team’s last first round draft pick. Jeff Gorton has to start thinking about recuperating assets and building up the depleted farm system yet again. Michael Grabner could fetch a first round pick and/or a mid to high level draft pick at the deadline.

With a fully healthy lineup, the Rangers can adapt their lines to the point where the fourth line isn’t the skill line it was at the start of the year. With Nash, Zibanejad and Buchnevich back in the lineup, you could have a fourth line with Jesper Fast, Oscar Lindberg and one of Pirri, Hrivik or Puempel. With this, you have a traditional defensive, forechecking fourth line that might be able to alleviate some pressure off of the bad defense and lessen the departure of Grabner.

Also, the expansion draft is looming. As of right now, it seems almost certain that the Las Vegas Golden Knights would take either Antti Raanta or Michael Grabner. I doubt the Rangers protect Grabner, and he’d be a quality, affordable addition to the Vegas team.

However, there are some downsides. Grabner is just 29, so it’s not like he’s old and going to decline soon. He’s around the prime age for NHL players, so maybe playing with a high skill Rangers team and in AV’s system have made him a truly better player. There’s also a chance that Vegas opts to take someone else instead of Grabner. It’s a situation where Jeff Gorton has to weigh his options.

While Grabner has been incredible offensively, and one of the better forwards on the team, the Rangers have to start thinking long term. Even if they wait until after the season, it’s better to get something for Grabner rather than nothing considering there’s likely a 50/50 shot he is taken by Vegas. Assuming the Rangers can get a first or second round pick or a prospect, or maybe some long-term defensive help, trading Grabner might be the best route for Gorton to take.