← Rangers stomp Penguins at home in a shutout victory; Nash picks up League leading 12th goal
Dan Boyle and the Rangers excited to take on the Avalanche at home →

Dan Boyle expected to play tomorrow against the Avalanche 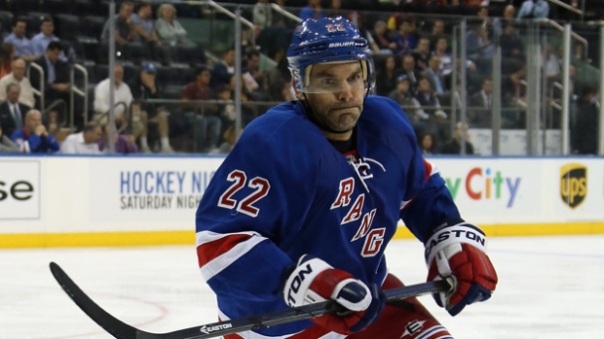 Dan Boyle is expected to start for the Rangers tomorrow night against the Avalanche. It will be his second game for the Rangers this season, his first game since injuring his hand on October 8th.

For the first time since the Rangers season opener against the Blues, offseason acquisition Dan Boyle is expected to return to the Rangers lineup when they take on the Avalanche at Madison Square Garden.

During the second period of the season opener, Dan Boyle fractured his hand blocking a slap shot, and was replaced with Matt Hunwick, who will still be in the lineup due to the absence of Captain Ryan McDonagh.

The Rangers will really appreciate Dan Boyle’s presence on the struggling New York power play, which is currently at 14.3% efficiency (6-42), and is 21st in the league. Throughout his career, Boyle has been known as someone who knows how to quarterback the power play, and ran the Shark’s power play successfully for six seasons.

Dan Boyle has lived on the power play throughout his career, and can move the puck well on top of providing solid defensive play, all things that the Rangers could use right now.

With McDonagh out, the defensive pairings aren’t as obvious as they were to start the season. If I had to guess, I’d say that he would play with Staal, his initial linemate, with Klein sliding up alongside Girardi. For the rest of the Rangers, don’t expect any other changes outside of Boyle.

With Boyles return, that means that one of the defenseman will be a healthy scratch. The likely candidate for a healthy scratch tomorrow night is Michael Kostka. Although he struggled in his first game against the Islanders, you have to give credit to Kostka for stepping up and playing well in his limited minutes when the Rangers needed him most. Kostka will stay as the Rangers’ seventh defenseman.

With Kevin Klein as the only defenseman with a goal this season, the Rangers could surely use an offensive boost from the back end, as well as the solid defense that Boyle can provide.

← Rangers stomp Penguins at home in a shutout victory; Nash picks up League leading 12th goal
Dan Boyle and the Rangers excited to take on the Avalanche at home →