Should the Rangers take the plunge and sign Alexander Semin?

Alexander Semin is still a free agent, and his offensive prowess could benefit the Rangers lineup. Should they sign him? Photo courtesy of Marc DesRosiers/USA TODAY Sports.

Although it’s July 19th, there are still some surprisingly good players left on the market as free agents. Eric Fehr, longtime Capitals, is still without a team. Brad Boyes is still a free agent after being bought out by the Panthers. James Sheppard is also unsigned.

But the most controversial free agent on the market is Alexander Semin, the former standout with the Capitals who was recently bought out of his contract by the Carolina Hurricanes. He was making $7 million this past season, and wound up being a healthy scratch at times, registering only 19 points in 57 games.

Semin has gotten criticism around the league for being a locker room cancer, and not the type of player that you want on a championship caliber team. But are those criticisms warranted?

First and foremost, this shouldn’t be on the top of Gorton’s to-do-list. Signing Derek Stepan to a long term contract is of utmost importance. After that, with whatever is left over, then maybe he can look for another depth player on a short deal.

When Alex Semin was in his early days with Washington, there may have been no better player in the entire league. Back in the 2009-10 season, Semin scored 40 times while also adding 44 assists. 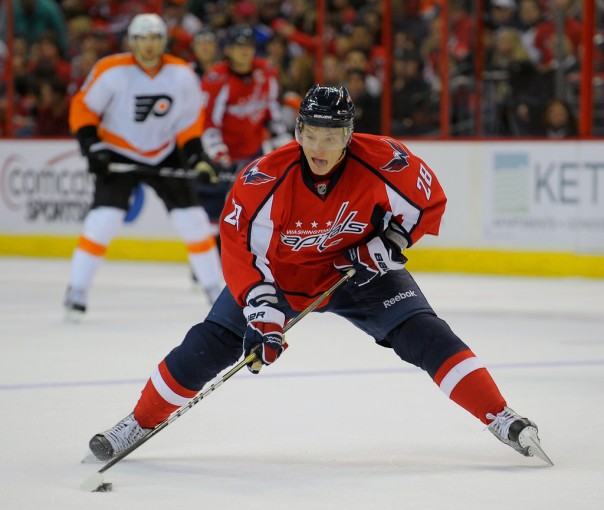 Alexander Semin was an offensive standout in D.C., scoring 40 goals in the 2009-10 season. Photo by John McDonnell/The Washington Post.

He started out well in Carolina, averaging a point per game in the lockout shortened 2012-13 season, but his production quickly dipped off, falling to six goals and 13 assists this season. The Hurricanes scratched him throughout the year, despite his $7 million salary.

The common phrase surrounding him is “lazy.” But Joe Fortunato from Blueshirt Banter makes a great point. Alexander Semin has never been a defensive player. When he was scoring 40 goals a year, nobody cared, because the offensive production was fantastic. Once the scoring dips off, the consensus was instantly “he’s lazy and not trying hard.” He never had a defensive game for him to fall back on, which made those comments come even more frequently.

His offensive drop off may be a product of the team he was on. The Carolina Hurricanes were one of the worst offensive teams in the entire league. Eric Staal led the team with 54 points, and defenseman Justin Faulk was the only other player to tally over 40 points (49). It’s not like Semin had anyone good to pair with or to feed him the puck.

Semin was pretty unlucky. He shot the puck a lot less than he did in his 22 goal 2013-14 season, but his shooting percentage plummeted four points to 6.5%. His PDO (his on-ice shooting percentage + on ice save percentage), which is supposed to be around 100%, was at 97.49 at even strength. That can somewhat be attributed to bad luck and good goalie performances.

Semin also saw his power play time cut in half this season. In the past two seasons with Carolina, he averaged over 3:30 of power play time. This season? Just 1:30. That’ll surely do damage to anybody’s numbers.

One stat that really impressed me was his possession numbers, which show that he was able to create offense for him and his teammates with the puck. On a horrible offensive team, he still managed a 55.89 corsi for%, which means that his team generated far more shots and scoring chances when he was on the ice.

The Rangers have taken risks in the past. Anton Stralman and Benoit Pouliot were two cheap, low-risk signings that Sather made in an attempt to add to the production of the team. Most teams around the league would not take a chance on those players, but they wound up playing integral roles in helping the team get to the Stanley Cup Finals for the first time since 1994.

Semin is one of those low-risk, high reward type of players as of right now. While many say he’s a bad locker room presence, it seems to me that the Hurricanes gave up on his as well. It can’t be easy to play on a team that doesn’t really want you there.

He still has a lot of skill, and he could be a fantastic on either the now-vacant second line right wing slot, or with Kevin Hayes on the third line. His creativity and passing on the power play would be tremendous, and the Rangers don’t need him to be a two way player. They already have Rick Nash, Derek Stepan, Jesper Fast, Dominic Moore and others to be the defensive forwards. Semin could purely focus on offense and scoring here, and utilize his abilities to score more crazy goals like this one.

My guess is that a deal could get done for really, really cheap. I don’t think anybody wants to take a chance on him, and he’s still getting paid from Carolina, so Gorton could potentially get him on a bargain deal. If he can, then why not? Maybe it’s worth the risk to sign a high-ceiling player like Semin over the steady veteran Brad Boyes.

The Rangers have taken risks in the past that have paid off for them. Semin could be another risk that really pays off. With the talent on the Rangers, it’s very possible that he could come up with at least 40-50 points. And that could be just enough to push them past that last hurdle, and on towards a Stanley Cup championship.