← Clear your calendars: Games to watch out for in the 2015-16 season
McDonagh and Yandle: A match made in hockey heaven → 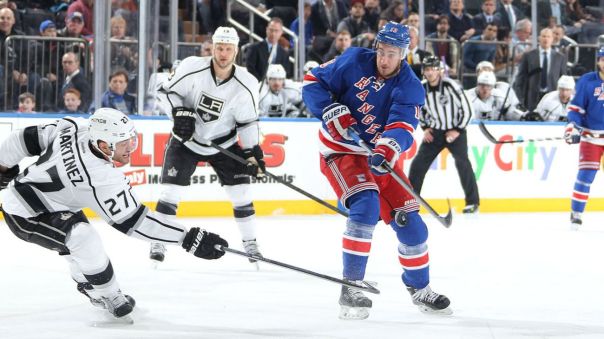 Kevin Hayes would certainly be a great top-six winger, but shoulg Vigneault opt to keep him as a center and create a very big, physical, and potentially effective line? Photo courtesy of MSG Photos.

The Rangers do not have many questions surrounding them for next season. There is no goalie controversy, the defensive pairings are set, all of the key players are signed through the next season, and we know where most of the players will end up.

But the one real question that the Rangers have is how they should organize their last two lines. With the additions of Viktor Stalberg, Jarret Stoll, Emerson Etem, and the one way deal given to Oscar Lindberg, there are potentially a lot of moving parts for Vigneault when it comes to his bottom six. AV likes to be able to roll four lines effectively, so his choices will be very important in determining the team’s success and effectiveness.

There is no real general consensus when it comes to other writers and other fans. Personally, I’ve heard some people saying that Stoll should get the spot because of his experience and faceoff abilities, other people want Kevin Hayes to develop as a center, and then others believe that it’s time for Oscar Lindberg to start in the NHL.

But over the weekend while watching old Rangers highlights and games (admit it, most of us are at that point), I started thinking about how the Rangers could best format their lines so that there is skill, speed, and defensive ability throughout the four lines.

The top line is already set, or at least it should be. The trio of Rick Nash, Derick Brassard and Mats Zuccarello performed tremendously when they were put together, and it was easily the team’s best line. Chris Kreider and Derek Stepan should wind up together again, with the right wing spot on the second line vacant.

Personally, I see two strong contenders, with one player having an outside chance at claiming that spot. The two main contenders for the right wing position alongside Stepan and Kreider are most likely Kevin Hayes and JT Miller. Hayes is a winger by trade, and the team may want to get him playing more offensive minutes, which they could do by shifting him to wing. Miller on the other hand, can play all three positions, and fit in the top six nicely during the playoffs. 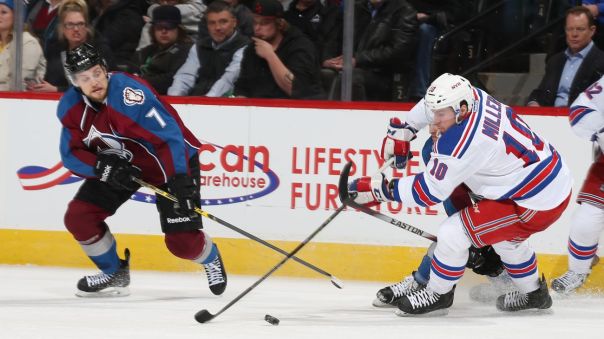 JT Miller showed signs of being a strong candidate for top-six promotion, especially during the playoffs against the Lightning. Photo courtesy of Getty Images.

The longshot would be Jesper Fast. He showed some offensive flare in the playoffs, and paired well with Stepan and Kreider in the second round. But I think that Vigneault would rather keep him on the fourth line, where he can utilize his excellent defensive play and surprise opponents with his speed and scoring touch. So for now, let’s keep him out of the occasion.

If Hayes moves up a line, then Miller probably wouldn’t play center. He can, but it isn’t his strongest position. That would leave things up to Lindberg or Stoll most likely. Stoll is not a potent offensive player, but he’s a steady defensive presence, a strong forechecker, and great in the faceoff circle. Lindberg was a good scorer in the AHL, but he’s unproven at the next level. He can also help with faceoffs and killing penalties.

If Vigneault wanted to keep Hayes as a center, giving the Rangers three very good scoring centers and three good playmakers, then Miller could move up into the top six, and I think he would play very well in that role. I see Miller as a Dubinsky-esque player, capable of putting up 40-50 points, and playing a physical game as well.

On top of that, Stoll and Lindberg don’t have to play center. Both can move around wherever they are needed, which means that Vigneault wouldn’t have to worry if he keeps Hayes down the middle.

If Hayes remains at center, then Vigneault should think of making a line that can wear opponents down with their size, speed, forechecking, and then finish off with some goals. That line could be Viktor Stalberg, Kevin Hayes and Emerson Etem.

While it may be tough for a young player to start his second season with two totally new linemates, Hayes managed the constant shifting of teammates throughout the season, so I don’t doubt his ability to maintain his success while starting fresh.

While Stalberg has struggled recently, he’s a former 20 goal scorer with Chicago back in the 2011-12 season. This past season was marred with injuries and an extended stint in the AHL, limiting him to two goals and eight assists in 25 regular season games. Back in the 2013-14 season, he tallied eight goals and 10 assists in 70 games played. 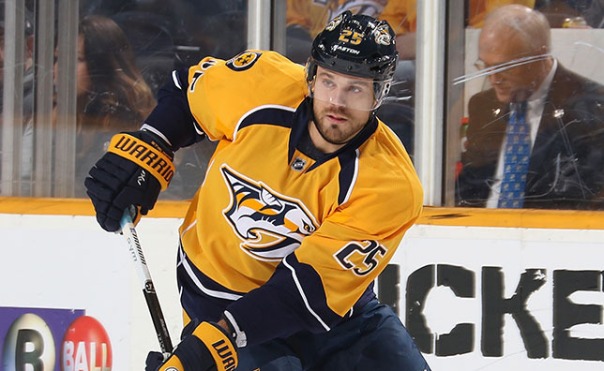 Viktor Stalberg struggled in Nashville, but with the extra motivation of having to prove himself once again may push him to play better. Photo courtesy of the Nashville Predators.

Stalberg may have some extra motivation to produce this season too. After being bought out by the Predators, he signed with the Rangers on a one year, $1.1 million deal. Realistically, he’s playing for his career. He needs to prove to both the Rangers and any potential suitors after this season that he’s capable of being a productive NHL player. Hopefully that motivation is enough to help get him back to that same form from a few seasons back.

One of the other new Rangers, Emerson Etem, would be a great fit on the right side of the line. Standing at 6’1” and 212 pounds, Etem is known for using his size and strength to muscle defenders off of the puck and create scoring chances. In Anaheim, he was mostly buried on the fourth line with less skilled players. Back in his final season of junior hockey, Etem scored 61 goals with 46 assists, making him one of the most prolific scorers in the WHL. He was very successful in the AHL too, tallying 75 points in his last 72 games with the Norfolk Admirals.

Pairing Etem with Kevin Hayes (6’5” 225 lbs) and Viktor Stalberg (6’3” 209 lbs) would give Vigneault a trio that can essentially do everything, while using their height and bulk to great advantage. Stalberg is excellent defensively, and a solid possession player, and Hayes also became quite good at takeaways and defending around the winter months. All of the players on this line are known for to battle along the boards, and win the puck more often than not.

Hayes, Stalberg and Etem would also be able to pin opponents back in their own end for a long time, tiring the other players and even forcing icings or turnovers. And when it comes down to it, the line should be able to score some goals.

I really think that with the right teammates, and in Vigneault’s system, Etem will be able to unlock his full potential. He’s really a very skilled player, and with Hayes’ natural playmaking ability and his tendency to use his reach to hold on to the puck, I think that can work well together. He’s fast, has great hands, and he’s just waiting for his chance to use his abilities as a top nine player.

And Stalberg is no slouch either. You wouldn’t guess it at first, but he’s quite fast. Just look at these two goals that he scored back with Chicago.

That speed will complement Hayes nicely. He’s definitely not slow, but having quicker players on the wings opens up the possibility of outlet passes, which Vigneault loves to utilize. He’ll be able to crash the net and look for deflections and loose pucks, and bully people in the crease and on the boards to open up the ice for his teammates.

Stalberg, Hayes and Etem combine to give Vigneault everything he could ask for in a line. Size, speed, defensive responsibility, scoring and physicality. They each bring something unique to the table, and together it could be one of the more dynamic, and surprising lines that the Rangers would have for every game.

← Clear your calendars: Games to watch out for in the 2015-16 season
McDonagh and Yandle: A match made in hockey heaven →