← Bold Predictions: The Rangers will have a strong powerplay this season
Rangers open up preseason against Devils, lineup announced → 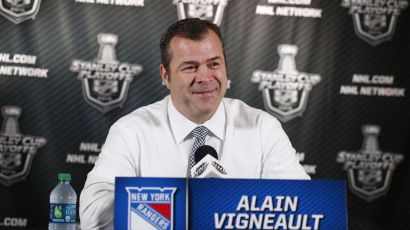 On the first day that the media were able to talk to the Rangers and their coaching staff, head coach Alain Vigneault had a lot to say about the upcoming season, his players and potentially alluding to how he plans on setting the roster.

Throughout the offseason, many people have said that this season will be of utmost importance for 24 year old forward Chris Kreider. He’s coming off of the best season of his young career, collecting 21 goals and 25 assists in the regular season, and adding seven goals and two assists in 19 playoff games.

Now, Kreider is in a contract year, and both he and the team will be looking for him to have a massive year, and for him to be a key contributor throughout the year. And that’s exactly the stance that Vigneault took.

“I look at Chris Kreider, and I believe he can be an elite player in this league,” Vigneault told Jim Cerny of Blueshirts United. “He’s got everything to become a dominant power forward in this league. He’s got almost two full years under his belt, except for a couple of games in my first year. He’s been improving, he’s been taking strides.”

We did see glimpses of that Chris Kreider in the playoffs, especially during the series against the Washington Capitals. In that series, he scored four goals on a line with Derek Stepan and Jesper Fast, as the trio helped spark the comeback from a 3-1 series deficit.

I’ve said for a while that I think Chris Kreider will be a 30 goal scorer in the NHL, and in my opinion, this is the year it will happen. During the offseason, he’s consulted with a sports psychologist in order to unlock his full potential, and he’s been training hard as always. Vigneault sees that, and expects a big year from Kreider. 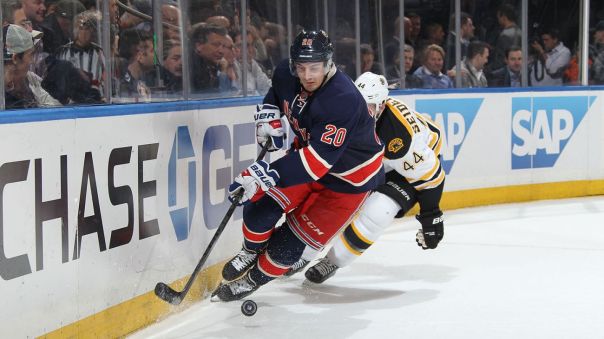 Another big question for the Rangers is what the lineup will look like, and how the injured players have recovered. Vigneault insisted that Mats Zuccarello would be ready for the first game of the season, and that he’s fully recovered from his head injury. Dan Girardi, Marc Staal and Ryan McDonagh are also anticipated in the starting lineup.

When it comes to the bottom six, anything could happen. It’s clear that Dominic Moore, Jesper Fast, JT Miller and Kevin Hayes are all but guaranteed a roster spot. But Hayes or Miller will move up and claim that vacant right wing slot on the second line. That means that Viktor Stalberg, Jarret Stoll, Oscar Lindberg, Emerson Etem, and Tanner Glass will be fighting for the remaining three spots, and one as a spare forward role.

What’s going to be very interesting is seeing where Hayes fits in the lineup. In an impressive rookie campaign, Hayes spent almost all of his time at center on the third line. Apart from a terrible faceoff win percentage, Hayes was a fantastic center, as he was able to use his impressive set of skills, ability to maintain possession and set up his teammates. However, he’s got tremendous offensive potential, so Vigneault may want to make him a top six player. That’ll all unfold during camp and the preseason games.

#Rangers AV said he doesn’t know where Hayes fits in. Could be third-line center, perhaps he’ll force himself into a top-6 role.

//platform.twitter.com/widgets.jsAnother thing Vigneault said made me think was about what he prefers the roster to look like. The third year head coach said he prefers to have eight defensemen and 13 forwards on his roster, but he’s not sure if the Rangers can structure that under the salary cap. Typically, a team has 13 forwards, seven defenseman and two goalies. That’s what the Rangers carried for basically all of last season. But Vigneault saying this potentially means two things; A) Vigneault likes to have more defenseman in case of injury, like the playoffs. Or B) He intends on giving players like Dylan McIlrath and Brady Skjei as much of an opportunity to make the team as possible. 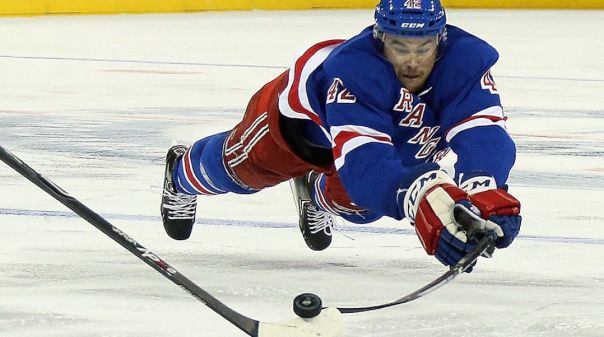 The biggest worry for Rangers management has to be Dylan McIlrath, the former 2010 first round draft pick who is currently on a one-way deal for a team with a log-jam of quality defenseman. If he doesn’t make the team out of camp, then he would need to clear waivers to get to the AHL, and there’s a high chance that he could get claimed off of waivers.

Jeff Beukeboom, who works closely with the AHL defensemen, has been singing praise of McIlrath ever since the second half of his year with the Hartford Wolf Pack.

“He was our best defenseman for several months at the end of last season,” Beukeboom told Jim Cerny of Blueshirts United. “In the playoffs he played in every situation and excelled in all of them. The more important the game or the moment in the game, the better Dylan played.”

Even Rangers captain Ryan McDonagh said that you could see the improvements in McIlrath’s game. With the Rangers salary cap situation, it could be helpful to try to unload one of the larger contracts and start playing the youth. If the Rangers can manage it, or if McIlrath impresses in camp, they should absolutely try and keep him. You don’t want to lose him for nothing, and if Beukeboom is right, he could be a big help to the lineup.

#NYR captain @RMcDonagh27 on rookie @dylan_mcilrath: “He’s a great kid, works his tail off, it’s fun to see him progress as much as he has”

And lastly, like many of the players had said before him, Vigneault re-iterated that the Rangers have one goal in sight.

“That was sort of us going into last year and that’s sort of heading into this year,” said Vigneault. “We have a team that has the elements to win the Stanley Cup. We firmly believe that. So failure is not an option.”

The players believe it, and just as important is the fact that the coaches believe it. The matter of fact is the Rangers have a really good team. Yes, there are some uncertainties, and the younger players will have to be counted on, but the team is deeper, they’re confident, and they’re all healthy right now. It’s hard not to look at this team and have confidence.

← Bold Predictions: The Rangers will have a strong powerplay this season
Rangers open up preseason against Devils, lineup announced →