← Rangers explode for three late goals to give Vigneault 100th win in New York
How Swede it is! Lundqvist, Lindberg power Rangers to 5-2 win over Columbus → 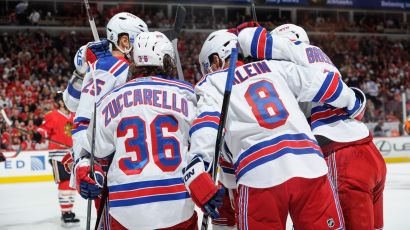 Hockey at the Garden is finally back.

The Rangers (2-0-0) are back under the lights at Madison Square Garden for the first time this season to finish off a home and home series with the Columbus Blue Jackets (0-1-0). The Rangers will play five of their next six games on home ice.

Under improbable circumstances, Alain Vigneault’s squad showed resiliency yet again, overcoming a 2-1 deficit by scoring three goals in 1:17 to secure a 4-2 road victory. Mats Zuccarello scored twice in the game, while Oscar Lindberg scored his second goals in as many games to begin his first full NHL season. Henrik Lundqvist was great again, stopping 31 of the 33 shots that he faced.

For tonight, Lundqvist is expected to start his third game in four nights. Vigneault wanted him to get off to a good start and get a nice workload early, so expect him between the pipes for the home opener. The Rangers also have a total of 17 back to backs this season, and there is plenty of opportunity for Raanta to start.

In his career, Lundqvist has played both games of a back to back 70 times, posting a 43-20-7 record along with a 2.01 GAA, a .929 save percentage and eight shutouts in the second game. 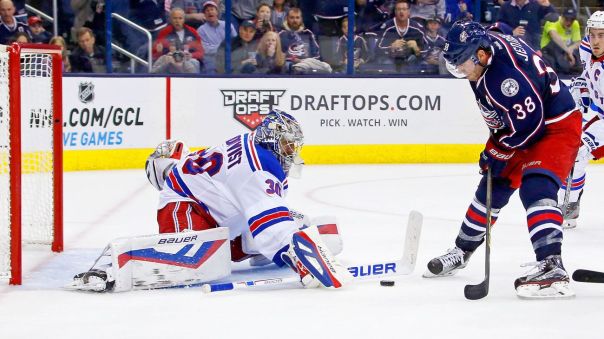 I’ve talked about him for all three games now, but Oscar Lindberg is my player to watch. He has played at MSG during the regular season before when he made his NHL debut last season as an emergency call-up. But he’s never played a home opener before. I expect him to be energized and effective on both sides of the puck.

JT Miller and Oscar Lindberg have both played very well on the third line with Lindberg. Miller has three assists in two games, and Stalberg is a monster on the forecheck and transitioning. I think at least one of them will break through with their first goal of the season. This line should be strong again.

Kevin Hayes broke through with his first goal of the season, giving him two points through two games. Getting that first goal takes a lot of pressure off of players, and Hayes should be more relaxed and able to play his game. Kreider is also another candidate to break out on this line.

Ryan McDonagh played an excellent game last night, embodying the role of a captain with his physical play and contributions on offense. He was on the ice for all four goals that the Rangers scored, and was strong defensively. I think he’ll get his first point tonight.

There are no expected lineups mainly because there was no morning skate. However, there’s a good chance that either Glass or McIlrath play because of the physical style of play that Columbus utilizes. McIlrath could replace Boyle on defense, who has struggled a bit, and Glass might play on the fourth line. Nothing is confirmed.

The Rangers and Blue Jackets will face off at Madison Square Garden at 7 PM. The game will be broadcasted on MSG Network.

← Rangers explode for three late goals to give Vigneault 100th win in New York
How Swede it is! Lundqvist, Lindberg power Rangers to 5-2 win over Columbus →