After two pretty disappointing efforts and the first two losses of the season, the Rangers (3-2-0) will look to end their goalless drought as they return home to take on the New Jersey Devils (0-3-1), who are searching for their first win.

The Rangers left Montreal empty-handed despite an excellent performance from Henrik Lundqvist, mainly due to their inability to sustain pressure as well as the play of the Montreal defenders and Carey Price.

While they’ll now be taking on a winless team in the Devils, the Rangers will still match up against a very good goaltender. Cory Schneider will be in between the pipes for the Devils, making just his third start of the season. Schneider made 34 saves in a shootout loss to the San Jose Sharks.

The Devils have had a lot of trouble scoring goals so far, finding the back of the net just six times in the first four games. Mike Cammalleri is their leading scorer with a goal and two assists, and three players are tied for second with two points, including former Ranger Lee Stempniak.

The Rangers are going with a very different lineup on Sunday, changing all four lines to try and spark some offense. New York has not scored during their last five periods of play.

Derek Stepan will be centering the top line in an attempt to try and spark some scoring from Rick Nash. Nash has a lone assist through five games, and hasn’t been all that effective.

On the second line, Derick Brassard is now centering Chris Kreider and Jesper Fast. Brassard has had a slow start to the season, and while Kreider has shown some flashes of brilliance, he has only two assists. Jesper Fast undeservedly spent two games in the press box, but he re-joined the fourth line in Montreal. Just like in the playoffs last season, he’ll get to prove that he can handle top-six offensive and defensive duties. 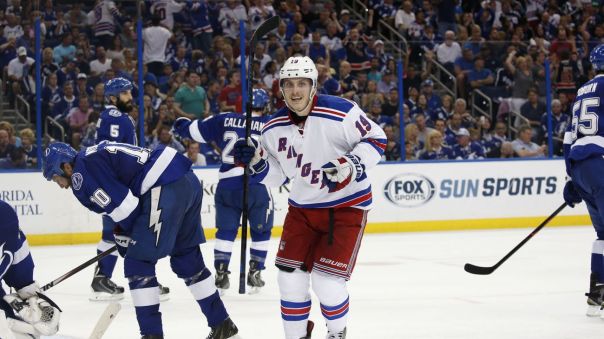 Kevin Hayes is back at center on the third line, with JT Miller and leading goal scorer Oscar Lindberg on his wings. I think Lindberg will benefit mostly from playing with Hayes. Hayes is a tremendous playmaker, and excellent passer and he had more primary assists than anyone on the team last season. For that reason, Lindberg is my player to watch.

Jarret Stoll is back in the lineup as well, playing the wing next to Dom Moore. Tanner Glass and Viktor Stalberg were rotating on the right wing, but realistically, Stalberg is a much better option there. So hopefully he plays against New Jersey.

The defensive pairs have also been moved around. Keith Yandle has been bumped up to the second pairing while Dan Girardi has been moved down to pair with him. I’m intrigued to see how this duo works out. Yandle’s increase in ice time should hopefully get him more involved, so he’s my other player to watch.

Kevin Klein is getting a big opportunity, playing alongside Ryan McDonagh on the top pairing. McDonagh hasn’t been all that good, and hopefully Klein will give him a better offensive partner and a steady defensive one as well.

Henrik Lundqvist will be making his sixth straight start following a masterful performance in Montreal. Lundqvist is a huge reason as to why the Rangers have been in some of these games, evident by his 2.21 GAA and .933 save percentage. He’s also faced an incredible 165 shot attempts already, averaging 33 shots on goal a game.

The Rangers and Devils will face off at Madison Square Garden at 1 PM. The game will be broadcasted on MSG Network.