← Rangers back on the road against Colorado while Nash remains questionable
Rangers head to the desert to take on the Coyotes; Yandle makes first return to Glendale →

Rangers keep the streak alive with 2-1 victory over Colorado 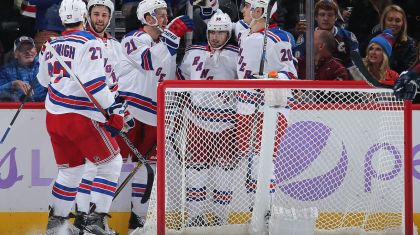 The Rangers (9-2-2) battled the struggling Avalanche (4-9-1) in their first of a brief two game road trip and skated triumphantly off the ice with a 2-1 victory, adding two more points to their already impressive record.

New York has now gone eight games straight with at least one point (6-0-2) and are currently riding a four game winning streak.

Rick Nash did not play this game after twisting his back in practice, meaning that Emerson Etem got a chance on the top line. He did not record a point or a shot on goal.

Dylan McIlrath also got another chance in the lineup, playing for the second consecutive game for Dan Boyle, a healthy scratch. McIlrath was very solid again tonight, recording a shot on goal and four hits in 14 minutes of ice time. He was second on the team in corsi with a +7.

It was mentioned during the pregame that the duo of Stepan and Kreider needs some work, and they had a sit down with Scott Arniel before the game to discuss what can be done to better themselves.

Needless to say, they took their assistant coach’s words to heart. Kreider used his impressive speed, and when that is accompanied by Stepan’s natural ability to read plays, great things happen. Although the Blueshirts were down by a goal at the end of the first 20 minutes of play, they came out strong, particularly because of Stepan’s line. They created numerous scoring chances but were denied by the strong play of Berra, who finished with 31 saves.

Reto Barra robbed the Rangers of a goal on a few occasions, finishing with 31 saves. Photo courtesy of Getty Images.

It was a great streak while it lasted, but the Rangers’ excellent penalty killing came to an end when Hayes took a high-sticking penalty against Dennis Everberg. Girardi got outplayed by MacKinnon, who was able to twist around and get a shot off, just skimming Lundqvist’s left pad and ending up in the back of the net.

JT Miller, a developing rookie for the boys in blue, was guilty of a giveaway at the Avalanches’ blue line late in the first but was able to get back in time to prevent a goal.

However, it was obvious to see who the better team on the ice was, as the Rangers had six shots on goal in the first six minutes of play. Not to mention, they also outshot the Avalanche eleven to seven, despite being briefly shorthanded. Most of the play was in Colorado’s zone, so it was definitely a frustrating start for a team that played so well.

The second period started out with much better play from the Avalanche, but the Blueshirts were persistent with their sustained offensive pressure. While the game on Tuesday night against the Capitals was dominated by offensive pressure from Washington, this game was all Rangers offensively, and they got rewarded for it…very late, though.

It was Derek Stepan who shifted the momentum in his team’s direction, scoring his first goal in the last seven games. It was also the first power play goal in a long stretch for his team, who had gone 0/5 in the previous contests. A swift pass from teammate Mats Zuccarello allowed Stepan to rip a shot from left circle, past the shoulder of Berra. McDonagh picked up a secondary assist on the game-tying goal.

But it didn’t stop there. Rookie sensation Oscar Lindberg wasted no time continuing the momentum swing, putting the Rangers at a 2-1 advantage a mere 21 seconds later- 13:03 into the second period. A feed from Captain McDonagh was shot home by the rookie, and Hayes picked up a helper on the goal that stunned the Colorado crowd.

Despite being shorthanded two more times towards the tail end of the period, the Rangers kept up the pace, partly due to Stepan’s strong forechecking. He was very effective on the penalty kill tonight. Just a thought- maybe he’s better because he can finally eat some solid foods now that his wisdom tooth problem is fixed.

Brassard has been the hottest Ranger to this point, and even though he was kept off the scoreboard last night, he was a strong force for the Blueshirts.

The Rangers briskly finished off the last 24 seconds of a penalty kill at the start of the third period. They would finish the night killing off four of the five Avalanche penalties.

Though not able to capitalize on a second power play in the period, Vigneault’s squad looked quick and decisive. Shots were taken, the passing was crisp, and they generated quality scoring opportunities.

A desperate Avalanche team put a lot of pressure on the Rangers in the dying minutes, but Lundqvist came up big for his team. (What else is new?) He finished with 29 saves, including 14 in the third period, to end a spectacular night.

Perhaps the most unselfish player on the team, Zuccarello passed the puck to Stalberg with an empty net awaiting him. Stalberg, feeling the pressure, missed the shot wide, to which Sam Rosen jokingly commented, “Zuccarello needs a stern talking to. What an unselfish player.”

Zuccarello did tally an assist in this game, and played an excellent all-around game. Zuccarello leads the team in scoring with 11 points (7-4-11) in 13 games.

Ryan McDonagh had one of his better games of the season tonight, playing a very solid game in his own end and adding two assists to his season total. The captain has gotten off to a slow start this season, so hopefully a game like this boosts his confidence. 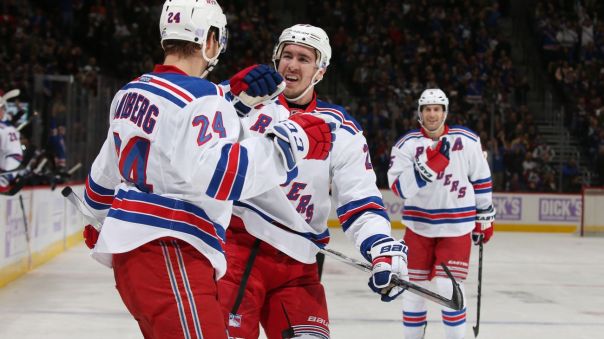 This was also the best game from Derek Stepan and Chris Kreider is a long time. Kreider had 4 shots on goal and a few that went wide, constantly pressuring the opposing defenders. Stepan broke through with a power play goal, his fourth goal of the season. JT Miller did help spark this line. All that’s left is to get Kreider scoring.

Whether the scoring is early or late, it’s a win either way. The Rangers look to extend their win streak to five games as they take on the Arizona Coyotes tomorrow night at 9:00pm. They beat Arizona 4-1 on October 22nd at Madison Square Garden.

← Rangers back on the road against Colorado while Nash remains questionable
Rangers head to the desert to take on the Coyotes; Yandle makes first return to Glendale →