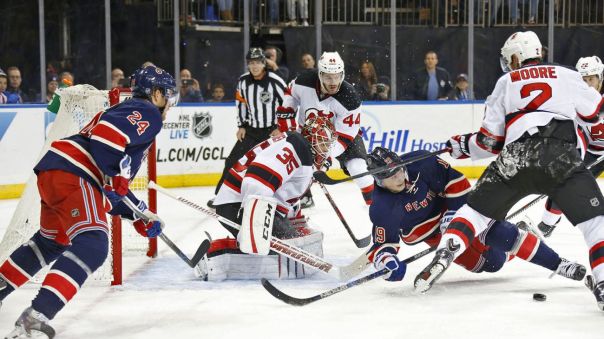 With the All Star Weekend in the rear view mirror, the Rangers (27-17-5) focus shifts to a battle for the playoffs. Thirty-three games spanning the next 68 days. Fifteen of those will come against Metropolitan Division opponents, including tonight’s matchup against the New Jersey Devils (25-20-5).

The Rangers have reason to feel confident though. In the last 10 weeks of last regular season, Alain Vigneault’s squad went 25-7-3 and secured the President’s trophy with their play after March. These last 33 games are incredibly important, especially since many of the games come against Division foes looking to take over the Rangers playoff spot.

This is second meeting between the Rangers and Devils this season, and the first since October 18 at Madison Square Garden. The loss snapped New York’s six game win streak against the Devils, which included a series sweep last season. Derek Stepan scored the Rangers lone goal on the 18th, but Cory Schneider blanked the Rangers the rest of the way and finished with 26 saves. Lee Stempniak scored the game winner in overtime.

Schneider is coming off of his first All Star appearance as he continues to prove himself as one of the most underrated, but still elite level goaltenders in the league. He’s started 42 of the Devils 50 games this season, owning a 22-15-5 record along with a 2.03 GAA (fourth in the league) and a .929 save percentage (T-6th).

The Devils don’t have any superstars on their team, but they’ve gotten a lot of production from unexpected sources. Players are overachieving, and its benefitting first year head coach John Hynes. Mike Cammalleri is having a bounce-back season, leading the team with 38 points (12-24-38) in 42 games played. Former Ranger Lee Stempniak has tallied 36 points (14-22-36), and Adam Henrique has scored 16 goals and 31 points.

But the biggest boost to the lineup has been their offseason acquisition, Kyle Palmieri. The 25 year old New York native is having a career year, leading the Devils with 20 goals and adding 15 assists. Along with Cammalleri, he’s a focal point of the offense, and the Rangers will need to watch out for him.

Henrik Lundqvist will probably be the Rangers most important player down this final stretch. He’s always been the guy that the Rangers lean on in crucial moments, and more often than not, he’s delivered. Lundqvist has also started a lot of games (40), and he’s posted a 23-13-4 record this season. He also owns a 2.41 GAA and a .921 save percentage. Lundqvist has allowed two goals or less in six of the last seven games.

With Rick Nash still out of the lineup nursing a bone bruise, the spotlight remains on Chris Kreider. This is a crucial stretch of his career. Simply put, his nine goals and 14 assists haven’t been good enough. While he has been better lately (3-2-5 in the last seven games), he needs to be consistent and a scoring presence every night. If he wants a big money contract and a long deal with the Rangers, he needs to prove it starting now.

JT Miller has four goals in the last four games, and five in the last six contests. He’s shown steady development and strong, consistent play over the last six weeks or so, and he’s been the best Ranger forward at driving possession and creating chances, outside of Rick Nash.

The Rangers and the Devils will face off at the Prudential Center at 7 PM. The game will be broadcasted on MSG 2.