Top trade targets and how the Rangers should approach the deadline 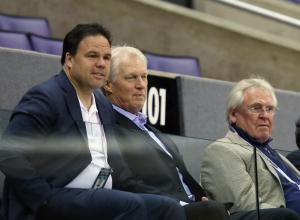 Following the conclusion of an exciting 2016 NHL All Star game, one that saw Pacific Division captain John Scott scored two goals and help led his team to the million dollar prize, the league will get back to business with games starting on Tuesday.

Perhaps more importantly is the approaching trade deadline, when the trade window closes on February 29. Team’s looking to improve their roster and make a playoff push will be inquiring about several players around the league, and the Rangers are expected to be right in the middle of it, both as buyers and sellers.

With Alain Vigneault’s misuse of Keith Yandle and his expiring contract, the Rangers may unfortunately wind up dealing him to a team looking for a puck moving defenseman. However, they’ll also likely be in the market for a top six winger to add some consistent scoring, something they really need.

However, the players are showing signs of improving. JT Miller, Kevin Hayes and Chris Kreider, the trio of talented young forwards, are averaging a 55% Corsi For, a big improvement from the team’s lackluster play early in the season.

Also, many of the skaters are in the midst of a serious shooting percentage slump or regression. Kreider is slightly below his career average, and Hayes is shooting almost seven percent lower than he was last season. Most surprising is Rick Nash, shooting 4.2% below his career percentage. So don’t be surprised if he goes on a scoring tear over the next few months.

With that in mind, the Rangers may not need to be very aggressive at the deadline. The team is rebounding, evident by their rising possession numbers as well as their results lately. Patience could be a valid tactic, but here are some players that could really help the team, as well as the way they should approach the hectic trade deadline.

Like I said earlier, Jeff Gorton should be patient. Unlike years past, he has a big trade chip in his possession by the name of Keith Yandle. Now I don’t want the Rangers to trade him. I think they’ll need him come playoff time. We saw how good he could be in the series against the Tampa Bay Lightning. But if a team offers a really good prospect, such as Jonathan Drouin, or a nice package of NHL depth players, draft picks or some prospects, it’s worth considering. Especially if AV continues to misuse him and not give him primary power play minutes.

However, if you can somehow figure out a way to trade Marc Staal or Dan Girardi (I know they have NMCs), then that should be at the top of the list. The Rangers desperately need cap space, and the $11.2 million duo of homegrown talent is limiting their ability to trade, sign or re-sign players. Preferably you would like to trade Staal, because he has one more year, makes more money than Girardi, and is a left-side defenseman. If Keith Yandle is going to get a bigger role, it would have to be in place of Staal or they’d shift Ryan McDonagh to the right.

Also, it’ll be hard to sign Kreider, Hayes and Miller after this year with the limited cap space. If a team offers a nice package for Kreider, who seems to have a lower ceiling than Hayes and Miller, it’s worth considering. The only player out of that trio I wouldn’t trade is Miller, because he’s been consistent, an excellent possession forward, and an asset wherever he plays in the lineup.

Winnipeg is in a very interesting situation with their current players, most notably Dustin Byfuglien and captain Andrew Ladd. Byfuglien is also rumored to be traded, with the big-bodied defenseman expected to get a raise to the tune of a $6-7 million salary.

Ladd’s fate depends on how the team handles Byfuglien. The Jets have a lot of scoring and some talented forward prospects like Nikolaj Ehlers, so they could elect to trade away their captain.

Ladd is a veteran forward who has won a Stanley Cup with the Blackhawks back in 2010. Last season, he was a big reason for the Jets’ success and their playoff berth, scoring 24 goals and 38 assists in the regular season. His production has dipped this season, but he’s still managed 10 goals and 17 assists in 49 games.

He’s also the type of player the Rangers could use in their top six; a big power forward that excels in front of the net and also boasts a good wrist shot as well as his ability to score those “greasy” goals. He’s a left winger, and could play alongside Derick Brassard and Mats Zuccarello, while Rick Nash partners with Kreider and Derek Stepan.

However, this is not an ideal trade in my situation. Not to say that Ladd is a bad player, but he’s the coveted winger that many teams will be trying to get, so that is going to drive the price up tremendously. I wouldn’t be willing to part with another first round pick, a high level prospect like Pavel Buchnevich or Brady Skjei, or a roster player. Ladd’s good, but giving that up for an upcoming UFA that the Rangers won’t be able to re-sign isn’t a good trade for me.

If his stock drops for some reason (don’t expect that), and the Rangers can get him for cheaper, then go for it. Otherwise, the cost will be too high.

A more realistic rental winger option is Radim Vrbata, the veteran right wing currently on the Vancouver Canucks. He enjoyed an excellent season last year alongside the Sedin twins, scoring 31 goals and 63 points, which was a career high.

His numbers have dipped on the offensively anemic Vancouver team. While that’s bad for head coach Willie Desjardins, but great for the Rangers and any team interested in him.

Vrbata has shown that he can put up points and finish when on a good team with solid players on his line. He’s a right wing, which fits in perfectly alongside Nash and Brassard, or Stepan and Kreider. That would allow Jesper Fast to slide back down to a normal fourth line role, and it would put JT Miller with Hayes on the third line, effectively balancing out the lineup.

There are a few reasons why I think Vrbata would be the perfect fit. First off, he’s a right winger, which is the exact position the Rangers so desperately need in the top six. He’s a UFA after this season, which means his contract won’t be a problem next year. He’s having a down year, which drives down his price a bit. And he’s also 34, which means that teams may be interested in a younger player. His age could drive down his price too. Being that he’s going to be 35 in June and a free agent, that also means that he will probably see his salary dip from $5 million, so the Rangers could look into retaining him as well.

A comparable trade is Jiri Tlusty from last season. The Jets got him for a third round pick and a sixth round pick. I think the Rangers could snag Vrbata for a similar price, which would definitely be worth it.

Cam Atkinson and the Rangers have been linked in trade rumors in the past two seasons. His situation is interesting because he is not a free agent after this season. Atkinson is under contract until the 2017-18 season for a cap hit of $3.5 million.

In each of the last two seasons, the 26 year old right wing has tallied 40 points, eclipsing the 20 goal mark in both of those seasons. In 50 games this year, he’s already tallied 32 points (17-15-32). He’s on pace to set new career highs in goals, assists, and points.

That will drive up his price, as well as his cap friendly contract and his age. But the Rangers could snag him in a trade for Chris Kreider.

The Blue Jackets may like having another power forward alongside Brandon Saad, and Kreider could fit that mold. The Rangers would be getting a proven 20 goal scorer in return on a friendly contract for the next two seasons. It works for both sides.

The Rangers could have a talented winger coming to North America by than April, and his name is Pavel Buchnevich. He’s currently with St. Petersburg in the KHL, and he’s one of the rising stars in the league. At 20 years old, he’s posting numbers similar to what Vladimir Tarasenko and Evgeny Kuznetsov at that age in the KHL.

If he decides to come to North America, it would be to play in the NHL. He doesn’t want to play in the AHL, and he shouldn’t. He’s talented and ready for a full-time NHL gig.

However, making the transition from Russia to North America can be tough. There’s the language barrier, the culture shock and the different brand of hockey. It’s hard to make the change. That’s where Nichushkin fits in.

Nichushkin is in his second full season in the NHL, but it’s his third year in North America. SO far, he’s scored six goals with 11 assists in 47 games this season. In his rookie year back in the 2013-14 season, he scored 14 goals along with 20 assists.

While he’s not exactly a veteran, he knows how to handle the NHL life, and he’s adjusted to North America. It would give Buchnevich a partner in crime in the locker room; someone that speaks the same language, plays a similar brand of hockey, and someone to learn from.

Malkin had Gonchar. Artemi Panarin is learning the ropes from former Ranger Artem Anisimov, and Ovechkin had tons of mentors down in D.C. Having a fellow Russian would help Buchnevich’s assimilation into the Rangers locker room and system.

On top of that, Nichushkin isn’t a slouch either. He’s just 20 years old and has a lot of upside. He would be a really nice fit alongside Kevin Hayes on the third line, and it would help balance out the lines again (Fast and Stalberg on fourth line, Glass and Paille out).

Nichushkin has a cap hit of just $925k, and he’s an RFA after this season. If the Rangers are smart, they could trade for him, give Buchnevich a mentor and Russian friend in the locker room, and re-sign him to a friendly contract in the offseason, just like they did with Emerson Etem and JT Miller this past summer.

Similar role to Nichushkin, but more of a veteran presence. Kulikov already has six full seasons under his belt at the age of 25, and he’d provide some stability for the Rangers on the blue line.

He shoots left handed, which means that he would play on the right side. If the Panthers would take on a big money defensive contract, Kulikov could slot into the lineup, and also provide a bit of cap relief, as he is signed through the 2016-17 season for $4.33 million.