← Quick Hits: NHL All Star Game, Patrick Kane, and the Dennis Wideman hit
Top trade targets and how the Rangers should approach the deadline →

Rangers must bring in reinforcements for bottom six forwards 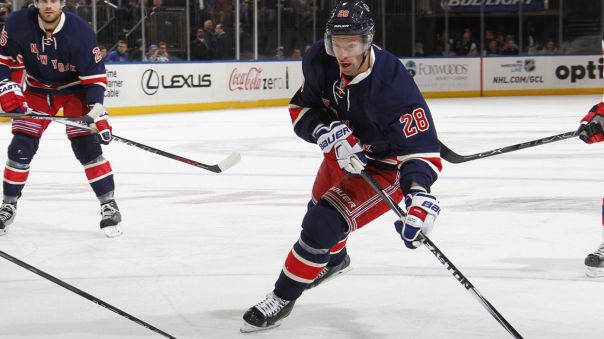 It is impossible to predict what rookie GM Jeff Gorton will do with the trade deadline looming exactly one month away this Friday. One thing is certain: a team dressing Danny Paille is not one that is going to contend for a Stanley Cup. Sure, Paille is only playing because Rick Nash is out with a leg injury, but injuries happen in the playoffs too. If the Rangers first answer for an injury is Danny Paille, or Jayson Megna for that matter, they are in trouble.

The thrusting of Paille into the lineup by head coach Alain Vigneault seems like a desperation move. Paille was passed up for over a full season by all other 29 NHL clubs and putting up mediocre numbers in the AHL when Gorton came calling and offering him an NHL job. He’s been really bad since he was brought in on Jan. 22nd to play in what was a 4-1 Rangers win against Carolina. It’s a small sample size, but the Rangers have been out-chanced 10-2, and outshot 47-20 while Daniel Paille has been on the ice in the last three games. Gross.

For Alain Vigneault, the ideal team is a four-line team like the 2013-2014 Stanley Cup Final team. During the surprise cup run that season, AV’S Rangers wore down opponents with four lines that came at your with pace for 60 minutes and did not let up. Brian Boyle was good enough handling the puck and making passes, was always around the net and was a physical presence on the forecheck. Dom Moore was and still is an elite fourth line center in the NHL. Dan Carcillo or Derek Dorsett were good enough and the Rangers reaped the benefits of having four deep lines. Fast forward to now, and the Rangers are currently deploying one of the worst fourth lines in hockey. Glass-Moore-Paille must never be a thing again after the All-Star break and beyond.

In a small sample size, Daniel Paille hasn’t been the answer for the fourth line. Photo courtesy of MSG Photos.

Last season Tanner Glass held the team from being a solid four-line team. This season he has a buddy in Danny Paille. Perhaps the fourth line of 2013-2014 was just AV getting lucky? Also the fact that he wasn’t able to hand pick his guy to bring in via free agency, like he did with Glass, could have played a role in the coach dressing a solid fourth line every night. Glass wasn’t an option, which is why that line was more effective.

There is still time for the Rangers front office to step in though. If the team were to get one more high quality forward everyone gets pushed down the totem pole into positions that will better suit their levels of play. Jesper Fast, for example, would no longer be 1st or second liner Jepser Fast, but 3rd or 4th liner Jesper Fast, and 4th line Fast is better than 1st line Fast. An ideal line up at the end of the season needs to look different than it does right now if they are serious about making another long playoff run.

Like I said, no one really knows what the Rangers will choose to do at the deadline. Gorton inherited a ticking time bomb from former GM Glen Sather, who handed out big contracts and gave out no move clauses like candy on Halloween. I am assuming the Rangers will try to add a solid bottom six forward at a manageable cap hit. Someone that can help them now and doesn’t carry too much term or money on his contract. It’s difficult to imagine a scenario in which they are able to free up the necessary salary cap space to bring in one of the hotter trade deadline targets like an Andrew Ladd, who is due to be a UFA this summer. Ladd carries a cap hit of $4.4 million and the Rangers just don’t have the dough.

You would also have to question if it is worth it for the Rangers to again give up another set of future assets for yet another rental. It would sting for the Rangers to give up a solid future NHLer, especially considering the fact that former Ranger Anthony Duclair is tearing it up in the desert with his pal Max Domi and Keith Yandle will be selling his apartment in June. 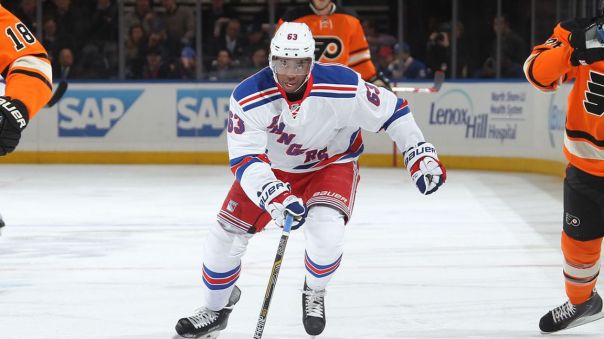 Can the Rangers afford to give up another prospect like Anthony Duclair? Photo courtesy of MSG Photos.

If the only option for the Rangers was to add a solid depth player or two, it wouldn’t be a terrible option. If Gorton thought he found a fit in a player that would come cheap in every sense of the word, and it was a player we knew for SURE Alain Vigneault would have some use for, then it could turn out to be what propels the group towards at least   being in the conversation to make a run at the Cup.

To give AV a player that could potentially fill the void left by Beniot Pouliot on the teams third line and subsequently get Kevin Hayes’ game going again would be giving the Rangers the same advantage as they had in April, May, and June of 2014: they’d be a four-line team.

It would have to come at the expense of the coaches favorite rugged winger Tanner Glass for the Rangers to truly become a four-line team, though. If they go about this the correct way they could have a fourth line made up of any of the three following: Lindberg, Moore, Stalberg, or Fast. All players that do well in the corners and on the forecheck, all players are responsible in their own zone and they all possess enough skill to make a positive impact on the game. A fourth line featuring Dom Moore centering Viktor Stalberg and Jesper Fast would be as formidable as any fourth line in the league.

If given a winger that compliments his rare skillset and passing ability, I truly believe Kevin Hayes will start playing really well by the end of the year. I think people have been a little too hard on Kevin Hayes. My eyes tell me he is a big doofus and skates like one. Some people might see that and say “he’s dogging it” but to me, Hayes doesn’t coast nearly as much as people make it seem. When you look at some of the underlying numbers, you see a different story then the beat writers and fans have been putting out.

The 24 year old center is coming in at 2.0 points per 60 minutes (P/60), good for third highest on the club. Last season he finished at 2.1 P/60 (including playoffs). Hayes ranks second on the team in primary assists and is one of the better possession forwards of the group. Hayes has been featured mostly in the offensive zone by AV, similar to what Derick Brassard had done the summer the rangers went to the finals last. 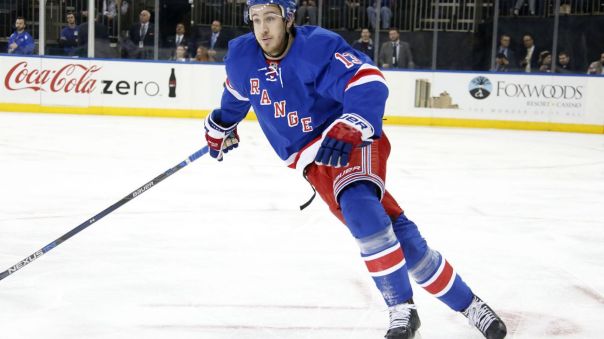 Oscar Lindberg is a player who has seen time on Hayes’ wing recently, but has been moving up and down in the lineup all season. Like Hayes, Lindberg’s underlying numbers look really solid. He ranks 2nd on the team in Goals scored per sixty minutes (G/60) and second on the team in P/60.

Adding one more solid possession player to Kevin Hayes and Oscar Lindberg’s line would be a very smart move for the Rangers this coming trade deadline.

I wonder if the player I’m requesting will come in the form of potential Russian phenom Pavel Buchnevich once SKA St. Petersburg, Buch’s KHL team gets eliminated in the playoffs. That would be sweet. While he is another left winger, Vigneault could probably shift Lindberg to the right wing on that line, or had him play center and move Hayes back to the wing.

The Rangers aren’t built from a crop of elite forwards like the dynastic Chicago Blackhawks or LA Kings. To be effective, their third and fourth lines have got to out play that of the opposition. In a seven game series, they’ve proven that they’re as tough to beat as any team in the league. Stealing games in the playoffs has become a regularity for veteran net minder Henrik Lundqvist and you better believe if the Rangers score early and are able to play with the lead, there’s a good chance they are winning that game. For this Rangers team to be like those of year’s past, Gorton has to make some magic happen.

← Quick Hits: NHL All Star Game, Patrick Kane, and the Dennis Wideman hit
Top trade targets and how the Rangers should approach the deadline →