← Rangers begin tough stretch tonight against St. Louis; McDonagh expected back
Should the Rangers shut Rick Nash down for the rest of the regular season? → 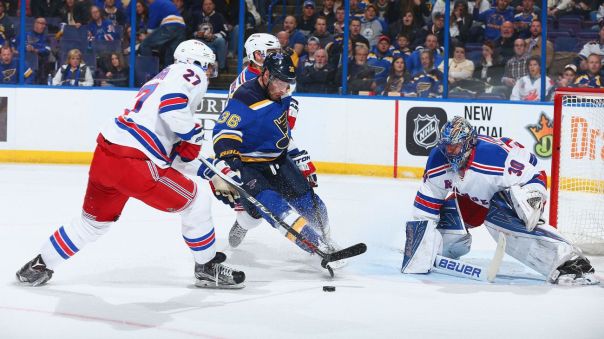 The Rangers got Captain Ryan McDonagh and defenseman Marc Staal back in the lineup as they faced off against the St. Louis Blues Thursday night. Henrik Lundqvist picked up his 30th of the season as the Rangers won 2-1.

With the win tonight in a spectacular 35 save performance, Lundqvist became the first goaltender in NHL history to earn at least 30 wins in 10 of his first 11 NHL seasons. The only season he didn’t win 30 games was the lockout shortened 2012-13 season, when 43 games were played and Hank won 24 of them.

Lundqvist is also one of just three goalies in NHL history to win 30 or more games in 10 different seasons, joining elite company with Martin Brodeur and Patrick Roy. Hank’s even strength save percentage is about .940% this year. Compare that to his 2011-12 season when he won the Vezina – .933%.

The Rangers started out strong as Kevin Hayes knocked down a clearing attempt in the Blues’ zone and gave the puck over to Lindberg at the right circle for the best chance in the first five minutes of play. Lindberg got his own rebound but was stopped by Allen.

Tarasenko had a great scoring chance from left circle, but he dinged the crossbar and the puck went out of play. The Rangers began to get a little sloppy in their defensive zone, and the Blues had sustained offensive pressure for quite a few minutes. Luckily, Lundqvist came up big for his team.

The Rangers started to put on some pressure with under half the period to play. However, the Blues had their chances too. Lindberg had the puck stolen from him in front of Lundqvist, and that led to many scoring chances for the Blues. Lundqvist was coming up with all kinds of saves to keep his team in the game.

Strong forechecking by the Rangers with a little over six minutes left in the period allowed the puck to get back to Dan Girardi at the point. He ripped a shot that was deflected by Tanner Glass. After slight controversy over whether Glass’ stick was over the crossbar when the puck was deflected, it was ruled a good goal. It was Glass’ first goal since December 12th and his second of the season.

Though the Blues outshot the Rangers 12 to 7 through the first period of play, both teams had quality scoring chances. Jori Lehtera got hit in the face with the puck and did not return for the rest of the game.

The teams traded chances back and forth to start the second period. Viktor Stalberg made a great move after he gained the blueline, but his feed to Lindberg was stopped by Allen. Miller was back in action and looked like himself in this game after being thrown out of the previous one.

The Rangers got the first power play of the game after Backes crashed into Lundqvist. The Blues caught the Rangers on a change and had a great shorthanded opportunity. The King came up with a huge save but left a rebound, which he just caught with his skate to prevent a tie game. The power play struggled as the Rangers did not sustain any offensive pressure.

The incredibly fast pace to this game led to numerous chances. Derek Stepan received a great feed from Miller but rang it off the post. The Blues came back the other way, but Stall broke up the play. The Blueshirts got back in the zone and had several minutes of offensive zone time. Zuccarello had two great chances in front of the net, and soon after Boyle had a breakaway. A great display of goaltending from both sides allowed the game to stay close.

A strong shift for the Blues led to a four minute double minor on Dan Girardi as he high sticked Tarasenko. The tying goal of the game came from Troy Brower. He took a wrist shot, and after Lundqvist made the original save, the puck trickled in behind him. The Rangers killed off the second half of the penalty to Girardi and had an opportunity of their own.

Ideally you want the pass to Stastny to be stopped. pic.twitter.com/dGvVoTN4ug

Girardi made a great defensive play to break up a two on one by the Blues after a giveaway by Kreider. The Blues outshot the Rangers 26 to 13 through two periods of play. How did only one goal get by on twenty six shots? The answer, Henrik Lundqvist.

The third period started out strong for the Blues as they tried to sustain as much pressure as possible. The Rangers relied heavily upon their netminder to bail them out. A bad giveaway in front of the net by the Rangers led to a great chance for the Blues, but Lundqvist kicked the puck out.

The intensity of this game just kept on rising. The Blues had a breakaway, and an amazing save by Lundqvist kept the game tied. It’s incredible how one save can change the course of a game. After the Rangers swept the puck away from the crease, they skated up the other way. Oscar Lindberg stick handled the puck on his knees and made an excellent pass from his knees to Chris Kreider between the circles. He wasted no time putting the puck behind Allen for the 2 to 1 lead 4:18 into the final
period of play.

Here’s the Kreider goal. What a pass from Lindberg. #NYR pic.twitter.com/KNnHyV8WL9

The Rangers did not have a shot on goal on their second power play of the game, and it continues to have major issues. The dump and chase has no chasing aspect to it, and they fail to get grade A looks. This is definitely one of the areas this team needs serious help in.

Oscar Lindberg got called for hooking with just over half the period left to play. The Rangers came up with a huge penalty kill, as they did a great job of keeping everything to the outside.

Kreider and Hayes were finding some chemistry late in the period. Hayes fed the puck to Kreider as he skated over the blueline and took a shot that was batted away by Allen.

The Blues did not have a shot on goal in just about six minutes of play in the dying minutes of the period. However, they did have a few good looks towards the last two minutes. Stalberg had a chance for an empty net goal but missed the net. The Blueshirts did a great job of forechecking and held on for the win.

Henrik Lundqvist was pretty much the entire story in this game. He kept his team in the game when they were sloppy. The Rangers have won eight of their last eleven games now and have played better overall. If they can improve on their special teams, that might help them not rely on Lundqvist as much.

At the end of the night, though, the Rangers came away with a win, and that’s what matters, the two points. They take on the Dallas Stars on Saturday to finish up the three game road trip which they have gone 1-1-0 on so far. Catch the action at 4:00pm.

← Rangers begin tough stretch tonight against St. Louis; McDonagh expected back
Should the Rangers shut Rick Nash down for the rest of the regular season? →