← Rangers fall to Penguins on the road; Lundqvist injured
Raanta makes 32 saves as Rangers take down the Capitals → 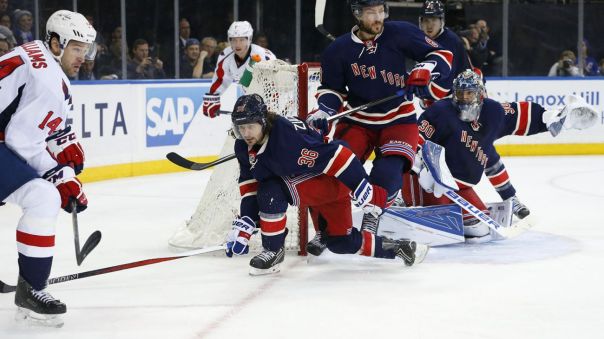 After losing focus and falling to the Penguins last night, the Rangers (37-21-6) are back on the road to close out their brief road trip against the league-leading Washington Capitals (47-12-4), a team that’s winning at a historic pace.

The Capitals 47 wins have already passed last year’s total with 19 games left on the schedule. Their 47 wins through 63 games are the most for any team in NHL history, and their 98 points through that same span is the most since the Detroit Red Wings in the 1995-96 season, and they have an 18 point lead over the New York Rangers. Needless to say, the Rangers will have their work cut out for them.

Last night, the Rangers had a mental lapse for 1:39, allowing three goals and ultimately losing the game because of that. Against Washington, they’ll need a complete 60 minute effort because the Caps are built to win from the net out.

In the first period last night, Ryan McDonagh accidentally collided with Henrik Lundqvist, hitting him in the head area. Hank played the second period, but left and didn’t play in the third. The Rangers said it was just “neck spasms,” but for some reason that seems unlikely to me. Antti Raanta will get the start and Magnus Hellberg has been recalled from Hartford on an emergency basis.

This is the fifth and final matchup between the Rangers and the Caps, with the Capitals winning the last three games of this rivalry. New York won the series opener, 5-2, but the Caps have won the last three and have scored 18 goals in the four games so far. Kevin Hayes (2-2-4) and Ryan McDonagh (0-4-4) lead the Rangers in scoring in the series.

The Capitals will be playing their third game in four nights, with another game coming up tomorrow. They’ve won two straight but they’re just 3-2-0 in the last five games. However, the Caps have picked up a point in 38 of the last 45 games, recording an incredible 35-7-3 record in that span.

Braden Holtby will start in net for the Capitals, looking to continue his remarkable season. While he does have the benefit of being on an incredible team, the fact that he’s won 40 games in his first 52 appearances (an NHL record) is really impressive. Holtby has two shutouts, a 2.22 GAA and a .923 save percentage.

Evgeny Kuznetsov has emerged as one of the best players on the Capitals and one of the best emerging stars in his second season, leading his team in scoring with 66 points (20-46-66) as well as in assists. That’s good for second in the NHL, and third place in assists. He’s currently riding a four game point streak (2-2-4), and has 12 points (5-7-12) in the last 10 games.

Justin Williams dominated the Rangers in the 2014 Stanley Cup Final, and he’s dominated the Rangers as a member of the Capitals as well. He’s enjoyed a bit of a resurgent year and has scored 19 goals so far, with six of them coming against New York. He only has three points in the past seven games, but he always seems to step it up against the Blueshirts.

As stated earlier, Antti Raanta will be back in net for the Rangers tonight as Lundqvist deals with an undisclosed injury. Last night, he stopped the three shots he faced, and he was brilliant on Monday night against the Blue Jackets, making 26 saves and allowing just one goal. He’s looked really good in each of his last two starts, and the Rangers need him to be good tonight against the Caps.

Kevin Hayes has made the move back to wing with the addition of Eric Staal, and while it’s a work in progress, he had some really good shifts last night. He’s been forechecking well and helping facilitate puck movement, and he’s been working well with Eric Staal since he likes to crash the net. Hayes does look more comfortable at center, but it’ll take time to figure out where Staal fits in and how the lines will work. But Hayes has had success against the Caps, recording nine points (4-5-9) in eight career games against them, including four in four games this season.

Eric Staal has also had success in his career against the Capitals, recording 71 points (27-44-71) in 71 games, with 21 points (5-16-21) in the last 20 games against the Caps. It’s been a tough transition to the Rangers for him, as he’s looked lost at times and has struggled to be the playmaker that he’s fully capable of being. We’ll see is he gets back on track tonight.

Marc Staal is still questionable for this game with the flu, so we’ll see if he is available closer to game time. If not, Dylan McIlrath will play again.

The Rangers and the Capitals will faceoff at the Verizon Center at 7 PM. The game will be broadcasted on MSG2.

← Rangers fall to Penguins on the road; Lundqvist injured
Raanta makes 32 saves as Rangers take down the Capitals →