← The Rangers should keep Raanta and Stalberg past this season
The Return of the King; Lundqvist back in net as Rangers battle Red Wings → 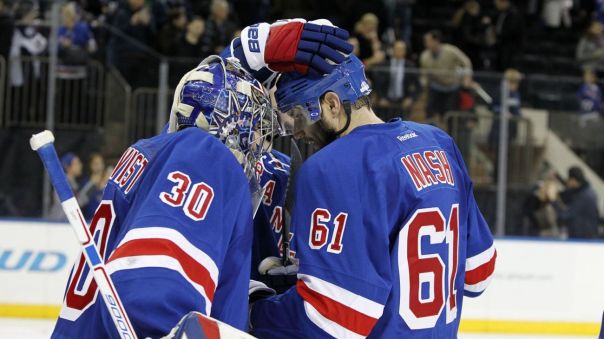 The Rangers can expect Rick Nash and Henrik Lundqvist back in the lineup tomorrow. Photo courtesy of MSG Photos.

After today’s practice, Alain Vigneault said the one thing that all Rangers fans were waiting to hear for an entire week.

Henrik Lundqvist had suffered neck spasms after colliding with Ryan McDonagh in the loss to the Pittsburgh Penguins, which was when he knocked over the net to get a needed stoppage. He’s missed the last three games, and Antti Raanta is 2-1-0 filling in for those starts.

Lundqvist practiced with Rick Nash and Benoit Allaire on Tuesday when the team played in Buffalo, and he’s participated in the optional practice yesterday and the full practice today. He didn’t say anything about Sunday’s game, and said he would just focus on Saturday against the Red Wings.

“I feel like I’m in good shape and it’s just about getting my timing back,” Lundqvist told Jim Cerny of Blueshirts United.

Speaking of Rick Nash, the veteran winger is poised to make his long-awaited return to the lineup tomorrow as well, although he’s not a guarantee like Lundqvist is. Instead, Vigneault said that there’s “a very good chance” that he plays tomorrow.

“Today was a bit harder than the last, so I want to see how (the bone bruise) reacts tomorrow and go from there,” said Nash. “It’s all been positive since I started skating again. I am trying to go harder each day and see how the injury reacts. Today was definitely the hardest day so far.”

This would be Nash’s first game since he suffered the bone bruise against the Hurricanes on January 22nd. The Rangers have fared pretty well without him, but getting him back in the lineup would be a huge boost. Nash has 33 points in 45 games, which would have put him on pace for another 60 point season.

There’s also a chance Nash could partner with Eric Staal, his team Canada teammate. The two are both big-bodied and very hard to move off of the puck, and that could create massive matchup problems for opposition. Both are great netfront presences, and they also both drive possession extremely well, which could work well together.

Marc Staal is also likely to play tomorrow after sitting out the last two games with back spasms. Barring a setback or another flare-up, which happened due to dehydration from the flu, Marc should be back in the lineup and partnered with Dan Boyle.

The only player that missed practice today was Derick Brassard, who looks to have caught the flu bug as well. Brass has goals in two straight games and four points (2-2-4) in the last three games, so his absence would be noted. But with Hayes and Eric Staal on the team, there are more than enough centers to fill in.

Here is what the lineup would look like if Brassard can’t play tomorrow;

If Brassard is feeling better, he will fly to his own on Detroit either today or tomorrow. Essentially, he’s a game time decision.

Stay tuned to The Ranger Zone, especially on Twitter @The_RangerZone, for any new updates.

← The Rangers should keep Raanta and Stalberg past this season
The Return of the King; Lundqvist back in net as Rangers battle Red Wings →