← The Return of the King; Lundqvist back in net as Rangers battle Red Wings
Pregame Notes: Rangers vs Penguins, Game 69 →

Lundqvist stellar as Rangers fall to Detroit in overtime 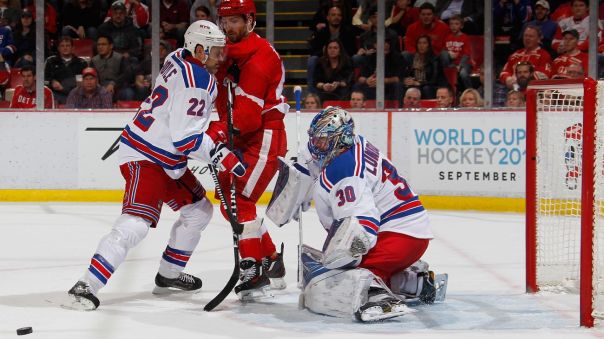 Ryan McDonagh had a chance to win the game in regulation with the Detroit net empty, but his shorthanded shot from the other end of the ice hit off of the post. Detroit would score on the power play with less than 40 seconds remaining, and wind up winning the game in overtime.

Henrik Lundqvist made his return to the lineup, and the Rangers made him work entirely too hard. Lundqvist faced 43 shots, making 40 saves. He was the sole reason why this game wasn’t 7-2 or even worse.

The Rangers as a whole played very poorly today, like they have been lately (2-2-1 in the last 5 games). Recently, they’ve been giving up a lot of shots, not having a lot of chances themselves, and playing like they were back in October and November, which is relying too heavily on their goaltending.

If there are some positives to take out of this game, it’s that the Rangers picked up a point while the Islanders lost, which is good for the standings. Henrik Lundqvist was amazing in his return, and Rick Nash had some strong shifts throughout the game and had over 17 minutes of ice time. Other than that, it’s a bit concerning because the Rangers need to improve their play.

The first period was a whole lot of nothing for the Rangers, at least for the first 19 minutes. They didn’t have a lot of chances or possession and allowed the Red Wings to get 14 shots on goal. Henrik Lundqvist looked excellent in his first period back, making a few great saves, moving very well in the crease and keeping Detroit off of the board.

Flurry of save by Hank. #NYR pic.twitter.com/wrSaATNBpb

Rick Nash also looked good in his first period back in 20 games. He was skating very well and was causing a lot of problems in front of the net, at even strength and on the power play. He had six minutes of ice time and two shots on goal in the first 20 minutes.

This period mostly consisted of Henrik Lundqvist making saves while the Rangers were largely back in their own zone. But with less than a minute to play, Derek Stepan opened the scoring for the game, his 16th of the season. Stepan rushed down the ice, got the initial shot on goal, and got the loose puck after a scramble in the crease, sending it past Petr Mrazek and giving his team the lead. Despite being outshot 15-7, New York held a 1-0 lead after the first period.

The second period was much more even, with both sides getting some looks and shots but both goalies were strong and didn’t allow another goal. The Rangers outshot the Red Wings 10-9 in the second period.

Lundqvist was really, really sharp again, making nine save and a total of 24 through the first 40 minutes. He started out strong by commanding the crease while the Red Wings were on the power play and made one of his best saves with the glove on Danny DeKeyser.

The Rangers best chance came on a rebound shot from Jesper Fast, but Mrazek recovered well and denied that chance. Chris Kreider had a breakaway but lost control of the puck before he could get a shot off. The score remained 1-0 after two periods.

The Rangers nearly scored in the first few minutes of the third period, but Tanner Glass’ one-timer was turned aside by Mrazek. From that point on, it was all Red Wings. They dominated puck possession, had tons of scoring chances and wound up scoring their first goal just minutes into the third period.

The Rangers tried to clear the puck and go off for a change, but didn’t change very well. Detroit sent the puck back into the zone. Dan Boyle lost sight of the puck at his feet, Luke Glendenning chipped it up to Darren Helm and he sniped it over the shoulder of Henrik Lundqvist to tie the game at one.

Despite the massive pressure from Detroit, the Rangers got a power play chance when Justin Abdelkader was sent to the box for goalie interference. And the Rangers power play struck for the fourth consecutive game, scoring their 10th power play goal in the last 14 games.

Derek Stepan didn’t get an assist on this play, but he fully deserved one for his fantastic keep in at the blue line. They cycled the puck, with Zuccarello getting it to Keith Yandle for a blast from the point. Chris Kreider was parked in front of the net and expertly deflected it over the shoulder of Mrazek for a 2-1 New York lead with just 4:27 remaining.

The Red Wings began pouring on the pressure again, coaxing Eric Staal into a holding penalty with 2:05 remaining in the game. With the net empty, both McDonagh and Stalberg came close to scoring on the empty net but they both just missed. That opened up the opportunity for former Ranger Brad Richards to score on a rebound chance with 31.8 to go in the game, which would eventually head to overtime.

Richards ties it in the final minute. I feel like I’ve said this before….. #NYR #DET pic.twitter.com/LhaYr43Nvs

In overtime, Eric Staal had the best chance for the Rangers, nearly sneaking one past Mrazek short side, Dylan Larkin had a breakaway chance, but Henrik Lundqvist made a fantastic pad save on the play. However, the Red Wings would secure the win on a Pavel Datsyuk wrist shot that deflected off of Darren Helm and past Lundqvist.

Don’t even TRY to say that Hank wasn’t screened.

If you don’t believe me watch this pic.twitter.com/w9WoFd4riX

The Rangers will look to bounce back at Madison Square Garden against the Pittsburgh Penguins tomorrow at 12:30.

← The Return of the King; Lundqvist back in net as Rangers battle Red Wings
Pregame Notes: Rangers vs Penguins, Game 69 →