Rangers look to even up the series in Pittsburgh; McIlrath back in the lineup 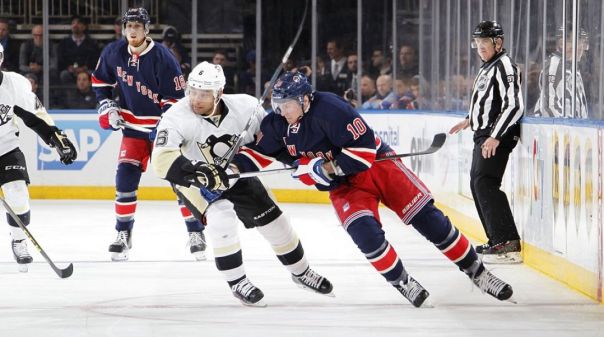 After a Hornqvist hat trick and a Penguins win in Game 1, the Rangers will look to steal home-ice advantage and even up the series today at the CONSOL Energy Center.

In the playoffs, the road team aims to take just one of the games away from their home stadium, and that’s what the Rangers need to do here. A win tonight would send the series back to MSG, with the series tied at one, and playing on home ice where the Rangers have an impressive record of 27-10-4.

The Penguins were backstopped by third string goalie Jeff Zatfkoff, who was stellar in Game 1, making 35 saves and keeping the Blueshirts at bay. Pittsburgh’s top players outperformed the Rangers best players, and some shoddy defense on New York’s part cost them a game. Sidney Crosby had a goal and two assists, Patric Hornqvist scored a hat trick and picked up an assist, and Kris Letang had a pair of assists.

On top of that, the Penguins are getting ready to welcome back Marc-Andre Fleury and Evgeni Malkin to the lineup. Fleury could be back today or very soon after, with his concussion symptoms subsiding. Malkin also practiced with the team, and could be back today as well. Both of those are unconfirmed.

The positive for the Rangers was that they didn’t play bad at all, and they actually dominated for stretches of the game but were undone by some defensive errors. Henrik Lundqvist also looks set to start Game 2 after a scary situation where he took a stick to the eye.

The goaltending situation is still murky for Pittsburgh, and it could be either Zatkoff or Fleury today. Fleury didn’t seem assertive or very confident when asked if he would start Game 2, but that could be the Penguins being secretive. I would guess that Zatkoff makes his second career playoff start today. Last season, Fleury was 1-4 in the playoffs, but posted a 2.12 GAA and a .927 save percentage.

Carl Hagelin looked dangerous against the Rangers. He had a couple of Grade-A chances, nearly converting on a few of them. His shorthanded redirection sailed just over the crossbar, and a deflection from the point was stopped by Antti Raanta. His speed caused the Rangers defense some problems, particularly exposing the top pairing of Dan Girardi and Marc Staal. Head coach Mike Sullivan will likely try to get Kessel and Hagelin more involved today and make them a focal point of the attack.

Tom Kuhnhackl was one of the AHL call-ups that Mike Sullivan used to strengthen his bottom six. He scored 15 points (5-10-15) in 42 games of his rookie season, and scored a crucial shorthanded goal on Wednesday that tilted momentum in favor of the Penguins. Kuhnhackl has scored six goals in his career, three of them being shorthanded. Those kind of impact players can help win playoff series, and those players are what’s lacking in the Rangers lineup.

Antti Raanta was solid in his first career playoff game, making 16 saves on 19 shots. But after seeing a specialist, Henrik Lundqvist looks to be good to go for Game 2. He was sporting a black and blue yesterday in interviews, but practiced fully. Magnus Hellberg is still here, but probably for emergency situations. The Rangers will need Hank to be at his best in order to battle back in this series.

The Rangers announced that Dan Girardi would miss Game 2 with an injury, forcing Dylan McIlrath into the lineup for his first ever NHL playoff game. In 34 games, McIlrath finished with four points (2-2-4) and a +7 rating, playing very well and playing very steady defensively. When he was paired with Keith Yandle in the regular season, the duo played fantastically. They’ll be together tonight, and McIlrath will have a lot of responsibility tonight.

Derek Stepan set a career high in goals with 22 in the regular season, and he kicked off the playoffs by scoring both of the Rangers’ goals, including one on the power play. He has 43 points in 81 career playoff games, and will tie Brian Leetch for playoff games played as a Ranger tonight. He’s being asked to step his game up even further tonight, centering Chris Kreider and Mats Zuccarello, who played very well together down the stretch.

The Rangers and the Penguins will faceoff at the CONSOL Energy Center at 3 PM. The game will be broadcasted on NBC.