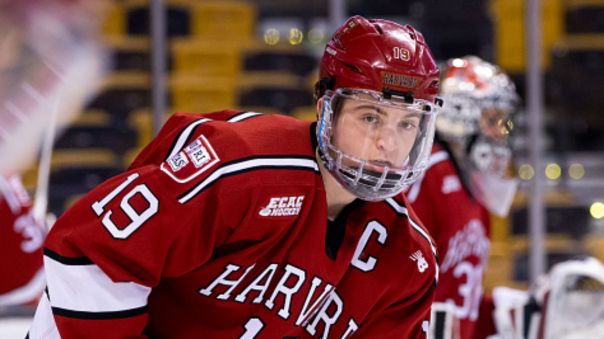 #VeseyWatch is over, and the 2016 Hobey Baker award winner is coming to Madison Square Garden.

In a somewhat shocking move, the Rangers have agreed to terms on a three year Entry Level Contract with Jimmy Vesey, the highly coveted forward out of Harvard University. Originally selected by the Nashville Predators in the third round of the 2012 NHL Draft, Vesey decided to test free agency and choose where he would begin his career.

Luckily for us Rangers fans, Vesey decided to come to New York and join a promising young forward corps that’s suddenly become deeper and full of youth and talent. Two months ago, everyone was worried about the Rangers’ bottom six and supplementary scoring. And now, the third line heading into opening night could be Jimmy Vesey, Kevin Hayes and Pavel Buchnevich. Talk about a turnaround.

The 23-year-old Vesey wrapped up his senior NCAA season by captaining Harvard and scoring 24 goals with 22 assists for 46 points in just 33 games. He won the Hobey Baker award after finishing as a runner up for the 2014-15 season, when he established career highs in games played (37), goals (32), assists (26), and points (58).

If you tally that all up, it amounts to 104 points in his last 70 collegiate games, averaging .80 goals per game and 1.49 points per game. His 56 goals over the last two seasons are the most in the NCAA in that span.

I wasn’t expecting Vesey to sign with the Rangers, but it makes a lot of sense. He’s a Boston native and childhood friends/teammates with Kevin Hayes, so the proximity to home and friendly face in the locker room had to have been a draw. And you can be sure that he will play, because the Rangers need youthful, affordable talent to add depth to the forward group.

Welcome to the @NYRangers @19Vesey. Childhood teammates to playing at MSG. Fans get used 2 this saying #thatwasvesey pic.twitter.com/eM2gKKGmC9

Vesey is an elite level talent too. Guys that score like that in college generally wind up being good prospects, so hopefully his skill translates to the NHL immediately. A potential top six forward on an entry level contract is a huge deal in a salary cap world, so this signing is fantastic in so many ways for the Rangers.

This also marks the second time in three years that the Rangers have robbed a team of a high level talent. First, they plucked Kevin Hayes from the Chicago Blackhawks after he didn’t sign his ELC out of college, and now they got Vesey. I don’t know what’s being said in the presentations, but kudos to the Rangers management.

And hats off to Jeff Gorton for an absolutely outstanding offseason. While the defense is still a potential mess, he’s done a lot to fix their other problems and get this team is really good shape heading into the season. On paper, the Rangers looked improved in many ways, adding depth, talented young players, and fixing the fourth line and penalty kill. On top of that, because of the Brassard trade, Gorton had the cap space to offer Vesey a contract loaded with incentives and performance bonuses on top of his $925k cap hit.*

*Contract details have not been announced yet

With the offseason acquisitions and the massive shakeup this team has seen in the past few months, the 2016-17 season will be very exciting for the Rangers. Jimmy Vesey, Pavel Buchnevich, Mika Zibanejad and the new-look Rangers look to have a bright future ahead of them.