← Fixing the Pirri Problem; How to best use the new breakout Ranger
Rangers fall in overtime to the Flyers → 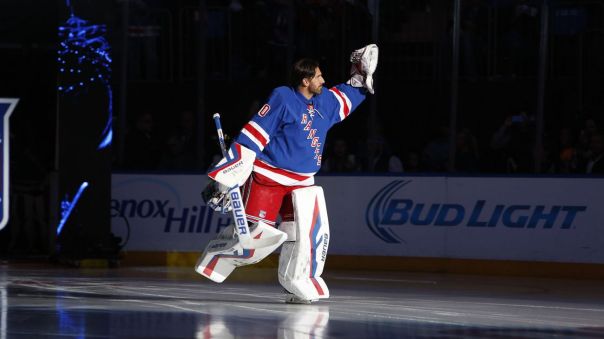 Following the team’s first preseason loss, Alain Vigneault and the Rangers will take on the Philadelphia Flyers for game four of the preseason schedule. Here’s how they’ll line up;

Vesey will get a chance to skate alongside some of the more skilled players on the Rangers roster and given a shot to showcase his talent. Vesey has looked pretty good so far and will aim to keep that trend going. He’ll almost definitely make the roster out of camp, but now’s a chance for him to try and earn a spot potentially higher in the lineup.

Kevin Hayes will play with Pavel Buchnevich in this game, which is a smart move by AV. Buch could take the right wing spot on the third line, but he’s also potentially in the mix for the spot next to Kreider and Zibanejad. Seeing how he plays with Hayes will help make that decision easier. Brandon Pirri will also skate on this line, looking to continue to impress and try and find his way into the lineup on opening night.

Marek Hrivik will get another game tonight, and he seems to be the wild card on this team. While Lapierre has skated in every game so far, I really don’t think he’ll get a contract because there are just too many players in front of him. Hrivik has reportedly come into camp faster and stronger and might wind up on the fourth line at center as a short term solution.

Clendening, McIlrath and Holden all will skate tonight. These are the “fringe” defensemen because they’re all fighting for some of the last roster spots on the blue line. Vigneault has recently said that Brady Skjei is a “work in progress,” so there’s a chance that Holden starts the season on the third pairing on the left side. Clendening has impressed with his transition game and potential as a power play QB, but McIlrath has continued to make strides and show that he’s ready for the NHL. Watch the performance of all three of these players.

Henrik Lundqvist will make his first appearance this preseason, starting the first half of the game while Skapski will come in to finish it. Lundqvist is coming off of a strong performance with Sweden in the Worlld Cup of Hockey, and hopefully that success translates to the regular season. The Rangers need him.

The game against the Flyers starts at 7 p.m. and you can watch it on MSG.

← Fixing the Pirri Problem; How to best use the new breakout Ranger
Rangers fall in overtime to the Flyers →