Final battle for roster spots tonight as Rangers battle the Flyers; Jooris back in action 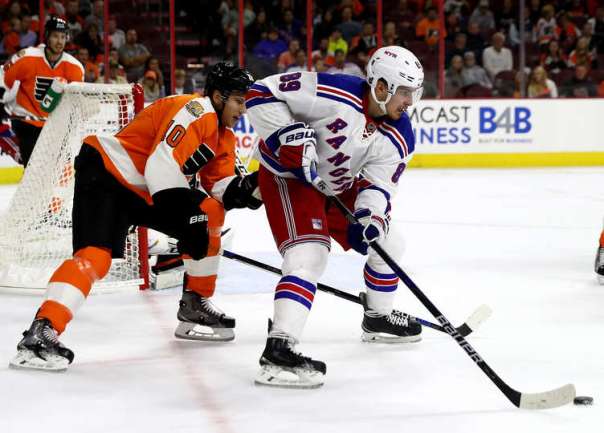 This is it; the final preseason game before Alain Vigneault and the Rangers begin their quest for the Stanley Cup on Oct. 13. The roster has been cut down to 29 players (you can read about that HERE) and tonight marks the last opportunity for players to state their case for a roster spot.

Here are the lines for tonight;

The top line is eye-catching because it’s one that has had some of the best chemistry in the preseason. Buchnevich has looked very comfortable and capable on the smaller rink and I personally think he’s ready for the NHL. He can’t buy a goal right now but he’s been good at facilitating chances on the power play as well as at even strength, and has come close to scoring quite a few times.

Chris Kreider and Mika Zibanejad should not be broken up. They’re so good together and that should be the second line; Kreider-Zibanejad-Insert Player Here.

Nathan Gerbe seems to be directly competing with Michael Grabner and Brandon Pirri for a roster spot as well as for the 13th forward spot, and he’ll play on the second line after getting over 20 minutes of ice time last game. We already know that he can play defense and the penalty kill, but tonight is his opportunity to showcase the offensive capabilities he has while playing with Vesey and Hayes.

The third line is more like a hybrid fourth line, with Jooris playing in his first game since the preseason opener due to a groin injury. JT Miller and Brandon Pirri play on this line, both potentially fighting for a top nine spot. Pirri has been outstanding but it’s hard for AV to find a spot for him without sitting a regular (JT Miller, etc.) or sacrificing rookie playing time (Vesey, Buchnevich). Neither is ideal.

Earlier today I posted an article on changing the format of the lines to fit Pirri, which you can read HERE. I also wrote something about how to best utilize him, which can be found HERE.

On defense, Holden, Clendening and Skjei all get their last chance to try and earn a spot on the opening night lineup or as the spare forward. I think McIlrath has made the team at this point, at least as the seventh defenseman. Skjei was initially expected to make the team but has looked shaky so far. Some seasoning in Hartford might do him some good.

I’m really hoping Clendening makes the team. He’s shown that he can move the puck very well, and has looked good when manning the power play. He could be a viable power play quarterback, which would take some of the burden off of McDonagh’s shoulders to play in every situation.

Henrik Lundqvist is expected to play all 60 minutes.

The Rangers will face the Flyers at 7 p.m. at Madison Square Garden. The game will be televised on MSG.