← The Rangers might not need to make a big trade for a defenseman anymore
Rangers down Boston for fourth straight win; Buchnevich scores first NHL goal → 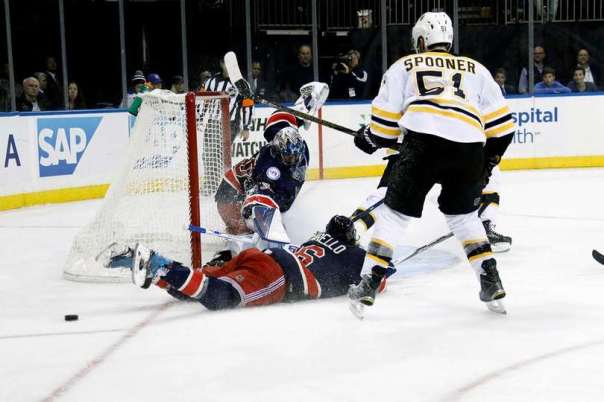 Following a sweep of a three game homestand, the Rangers (8-3-0) hit the road for one game to take on the Boston Bruins (6-4-0) at the TD Garden, beginning a back-to-back series for New York.

The Bruins were struggling a bit to begin the season but just finished a three game road trip, winning all three games, allowing a total of four goals in those games. Rask returned from injury and started all three games, while the Bruins received scoring from all over their lineup. They play three of their next four games at home.

The Rangers have been fantastic lately, winning their last three games and six of their last seven. The Rangers just swept a three game homestand, outscoring opponents 16-4, and got scoring from throughout their lineup as well. They were led by the line of Kevin Hayes, Michael Grabner and JT Miller.

This is the second of three meetings between these two teams this season, and the first one at the TD Garden. The Rangers won back on Oct. 26 by a score of 5-2, scoring five unanswered goals and getting 27 saves from Henrik Lundqvist. Brandon Pirri scored twice, including the game winner, and Rick Nash, Jimmy Vesey and Kevin Hayes also scored.

Tuukka Rask is expected to start for Boston. Rask was not in net when these teams last met, out with an injury, but has started the last three games and played very well. Rask is off to a fantastic start to the season, going 6-0-0 with a 1.48 GAA and a .951 save percentage.

Brad Marchand has gone from one of the NHL’s pests to one of their best. Last year he scored 37 goals and earned himself a new contract, and so far he has four goals and 12 points in 10 games. He’s become a much better offensive player and can seemingly score at will.

David Pastrnak is no longer a rookie prospect, he’s a top line talent on the Bruins now. After getting suspended for two games for a hit on Dan Girardi, he came back and scored a goal in his game back. He now has nine points (6-3-9) in eight games and is getting a real nose for the net.

Antti Raanta will start for the Rangers tonight in the first game of the back-to-back. Raanta was spectacular in his last game against the Lightning, nearly shutting them out until a late Stamkos goal. He finished with 31 saves and improved his save percentage to .921 in two games.

Kevin Hayes has been spectacular to start the season, benefiting from having talented players on his wings as well as the work he put in during the offseason. Lighter, quicker and more decisive, it has all paid off for Hayes with his 10 points (4-6-10) in 11 games. Hayes is tied for third in the league at even strength points (10) and has been one of the biggest reasons for his line’s success.

JT Miller is one of the other reasons. AV almost exclusively used the Grabner-Hayes-Miller line at the end of last game. He had an empty net goal and an assist last night, giving him 12 points (4-8-12) this season and six points (2-4-6) in his last three games. Watch out for this line tonight, because all three players have been amazing in the last three games, combining for 18 points (8-10-18).

The Rangers and the Bruin swill face off at the TD Garden at 7 p.m. The game will be broadcasted on MSG.

← The Rangers might not need to make a big trade for a defenseman anymore
Rangers down Boston for fourth straight win; Buchnevich scores first NHL goal →