← Rangers bounce back with gutsy win over the Penguins; Miller and Hayes rise to the occasion
Rangers host the Penguins and attempt to sweep the home-and-home series →

Zibanejad injury sets Kevin Hayes up for a breakout season 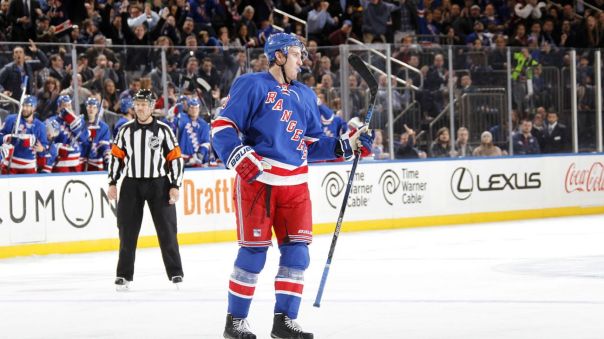 When Mika Zibanejad went down in overtime against the Florida Panthers, you knew it was bad.

Thankfully, the Rangers’ offseason acquisition only suffered a broken fibula, sidelining him for the next six to eight weeks. I say only because with the way he went into the boards, it could easily have been a shattered ankle, torn tendon or a messed up knee.

I like to think that I’m a bit of an optimist, so there was a bit of a silver lining to his injury. The first was that it’s a clean break, which is better when it comes to healing. The other positive out of this awful injury is the fact that Kevin Hayes will get a huge opportunity to grow and develop in a top six role.

Last night was Hayes’ first game on the first line, centering JT Miller and Mats Zuccarello on a line that had quite a bit of success. Hayes and Miller combined on a shorthanded goal, and Hayes also scored a goal of his own. That gave him 18 points (9-9-18) this season, which is tied with Miller for the team lead.

Last season, when Hayes’ point production dropped from 45 to 36 points, a lot of fans criticized him for being lazy, slow, ineffective, and other words that didn’t describe his play. Realistically, his point total wasn’t that far off from his rookie year, and it’s explainable to. In his rookie season, he was playing with guys like JT Miller and Carl Hagelin. Last year, he would play with Jesper Fast, Viktor Stalberg, and other players not noted for scoring or production.

So with Hayes now playing with Michael Grabner, Mats Zuccarello, Jimmy Vesey and Miller again, it’s no surprise that he’s seeing his point production rise. The last two years has been full of Hayes showcasing his incredible playmaking abilities, whether it be passing or puck possession or even his goal scoring. But his skillset seems to have improved this year.

I don’t want to say that Hayes looks like a different player, because his skills have always been there, but he does look different. He lost weight over the summer and seems to be at peak physical fitness, which is definitely helping him on the ice. He looks quicker, and his skating has certainly improved. His first step/stride is quicker and he’s also been quicker in his decision making, which has been crucial in helping him rack up more assists and goals so far.

Playing with Miller has really helped as well, as the two have shown considerable chemistry and could be a centerpiece of this team for years to come. Hayes can be seen as the set-up guy with his incredible ability to pass the puck and rack up primary points, while Miller has shown that he can be a go-to goal scorer. Mats Zuccarello provides that line with another excellent passer and a proven goal scorer, while having Michael Grabner on that line gives them a lot of speed and someone with a nose for the net.

Where Hayes has really impressed me is his improvement on the defensive side of the puck, as well as his play without the puck on his stick. He’s been okay defensively and away from the puck over the last two seasons, but this year he is excelling. Alain Vigneault clearly shows a lot more trust in him this season, putting him on the penalty kill and starting giving Hayes 68.1 per cent defensive zone starts. Hayes has also seen his faceoff numbers jump more than 10 per cent. His ability to move around the ice and position himself away from the puck has led to him scoring more goals this season too.

Zibanejad’s injury is tough and will truly test the Rangers and their depth. But if Kevin Hayes can continue his hot start to the season and anchor the top line, the team might be just fine.

← Rangers bounce back with gutsy win over the Penguins; Miller and Hayes rise to the occasion
Rangers host the Penguins and attempt to sweep the home-and-home series →