Rangers bounce back with gutsy win over the Penguins; Miller and Hayes rise to the occasion 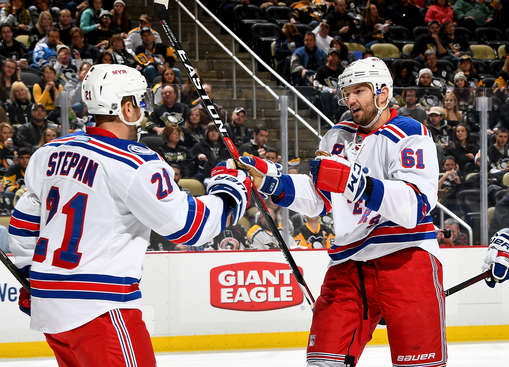 After their first two game losing streak, the Rangers (14-5-1) took down the Pittsburgh Penguins (11-5-3) on the road, scoring five unanswered goals and coming out of the PPG Paints Arena with a 5-2 win.

Antti Raanta started in net, his first start of his career against the Penguins, and secured his fifth win of the season with a solid 29 save effort. He remains undefeated with a 5-0-0 record with a 2.05 GAA and a .938 save percentage.

In the team’s first game without Mika Zibanejad, out for the next 6-8 weeks with a broken fibula, the depth of the Rangers shone through. Kevin Hayes and JT Miller, both playing on the top line, stepped up big time, with each of them scoring a goal. Michael Grabner scored his team best 12th goal of the season, at even strength yet again.

The Rangers have won at least 14 of their first 20 games for the fourth time in team history, a feat they achieved last season. They have also scored at least five goals in 10 of the first 20 games for just the second time in team history, and the first since the 1971-72 season. They are the first NHL team to do that since the Flyers and the Senators did it in 2005-06.

From that point on, the Rangers really turned things up a notch. The first period was pretty disastrous, with the Penguins outchancing the Rangers by a large margin, and with New York’s defense looking pretty shoddy. But they regrouped and played much better in the second and third period, all over the ice.

Rick Nash started the comeback with his eighth goal of the season, an unassisted goal at 4:51 of the second period. He worked hard on the forecheck to get the puck, got it on net and cashed in on a rebound. Michael Grabner tied the game 10 minutes later, converting on a feed from Ryan McDonagh with a perfectly placed backhand. He’s gotten his scoring touch back, and with Zibanejad out of the lineup, his scoring ability will be needed.

JT Miller’s goal, the shorthanded game winner, is a testament to his improved play and development in recent years. On the penalty kill, he stole the puck and started a breakout. Kevin Hayes brought it into the zone, passed it through the defenders and off of Miller’s body, deflecting past Marc-Andre Fleury and into the net.

Kevin Hayes scored his ninth goal of the season to really ice the game. Ryan McDonagh, who had a spectacular game, held the puck in the offensive zone after forcing a turnover at the blueline. After waiting for a shooting/passing lane to open, he threw it on net at Kevin Hayes, who was parked in front of the net and deflected it in.

Derek Stepan would ice the game with an empty netter, giving the Rangers a 5-2 win in Pittsburgh.

After two pretty disappointing losses, this was a really excellent, gutsy, bounce-back win for the Rangers. It was a bad first period, but they came out and played well in the last 40 minutes, and hardly looked like a team that was playing its third game in four nights.

The big story was how the Rangers will need to count on Kevin Hayes moving forward in order to absorb the blow of the Zibanejad injury, as well as using JT Miller more. They both stepped up, with each player scoring a goal and with Hayes picking up an assist as well. Hayes looks spectacular this season, and might finally be developing into the skilled center that showed a ton of potential over the last two seasons. Miller is picking up where he left off last season, and is tied with Hayes for the team lead in points (18).

Michael Grabner just can’t stop scoring. Signed as a free agent for two seasons, a depth forward with a history of scoring goals, he certainly has been more than just the fourth liner they were expecting. Grabner’s 12 goals leads the team, and with them all being scored at even strength, that gives him the most in the league for that category. His speed is spectacular and he’s been able to finish chances, which is critical because he has struggled with that in recent years. He has 16 points and has been a very nice surprise this season.

Ryan McDonagh had a superb game, picking up two assists, giving him 13 this season, and establishing a single game career high with a plus-five rating! The defense has looked a bit iffy recently, and McDonagh will shoulder a big workload this season.

The Rangers are back in action on Wednesday, finishing off the back-to-back series at MSG against the Penguins.