← Rangers fall in the shootout to Florida; Zibanejad out 6-8 weeks
Rangers bounce back with gutsy win over the Penguins; Miller and Hayes rise to the occasion → 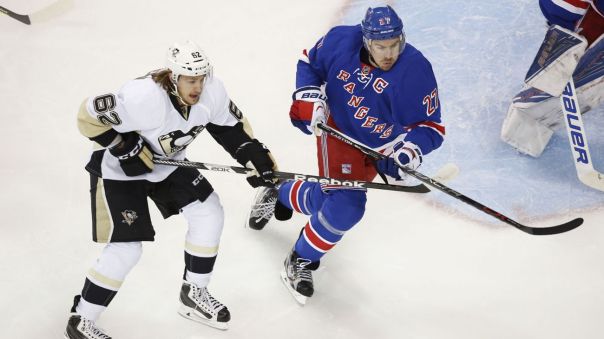 The Rangers (13-5-1) fell in the shootout to the Panthers last night and lost Mika Zibanejad for the next 6-8 weeks, but the turnaround is quick as they head to Pittsburgh to take on the Penguins (11-4-3) on the road.

Goals from Kreider and Zibanejad weren’t enough as the Rangers mustered a lot of scoring chances, but only two goals on James Reimer. It was the second loss in a row for New York, marking the first time this season that they have lost consecutive games.

The Penguins will be playing their fourth game in six nights, and coming off of a shootout loss to the Buffalo Sabres. Marc-Andre Fleury made 32 saves and allowed just one goal, while Sidney Crosby scored the lone goal for the Pens.

This marks the first of five games against the Penguins this season, and the first of two at the PPG Paints Arena. It’s also the first time these teams have played since the Penguins eliminated the Rangers in the opening round of the playoffs en route to a Stanley Cup Championship.

The Penguins won the season series in the 2015-16 season, with the Rangers posting a 1-2-1 record. Jesper Fast recorded a goal and three assists, while Kevin Hayes scored a goal along with a pair of assists. Derek Stepan tallied three helpers. Henrik Lundqvist started all four games, picking up one shutout and recorded a .917 cumulative save percentage.

Matt Murray is expected to start for the Penguins. Murray, whose surprise run as a rookie helped the Penguins win the Cup, is poised to take the starting netminder role from Marc-Andre Fleury. After missing some time with an injury to start the season, Murray is 5-1-0 with a 1.68 GAA and an .945 save percentage.

The Penguins didn’t have Sidney Crosby for the first six games of the season, but he’s been stellar since coming back, recording 12 goals and 16 points in 12 games. The Conn Smythe winner from last season, Crosby is one of the most dynamic players in the game. If he’s not scoring goals, he’s hurting you in some other way.

Phil Kessel is also off to a pretty fantastic start. You could argue that he should have won the Conn Smythe last season after scoring 22 points (10-12-22) in 24 playoff games, and he was a huge reason that the Penguins had the success that they did. Kessel has four goals and 16 points this season, with three of those goals and nine of his points coming on the power play.

Antti Raanta is expected to be in net for the Rangers. Raanta has been excellent to start the season, owning a 4-0-0 record along with a 2.05 GAA and a .938 save percentage. His last start was a 38 save effort over the Edmonton Oilers on Nov. 13.

With the loss of Mika Zibanejad, the Rangers have a lot of holes to fill. They lost their number two center, their trigger man on the power play, and a good all-around forward. One of the players who will get a huge increase in responsibility is Kevin Hayes. Hayes will be the second line center, and he’ll be counted on to play in the same two-way role that Zibanejad did. Hayes has improved defensively for sure, and his 16 points are second on the team. For the next 6-8 weeks, he’s a top six forward, and the Rangers will need him to continue his hot start to the season in order to make up for the void that Zibanejad’s injury leaves.

Brandon Pirri also will get some added responsibility. He’s been stapled to the fourth line so far, but it would be nice to see him get a chance to center the third line and play with a bit more talent. One thing you can count on is him getting an increased role on the power play. He’s a natural replacement to slot into Zibanejad’s shoot-first role on the man advantage, having already scored three power play goals this season.

The Rangers and the Penguins will faceoff at the PPG Paints Arena at 7 p.m. The game will be broadcasted on MSG Network.

← Rangers fall in the shootout to Florida; Zibanejad out 6-8 weeks
Rangers bounce back with gutsy win over the Penguins; Miller and Hayes rise to the occasion →