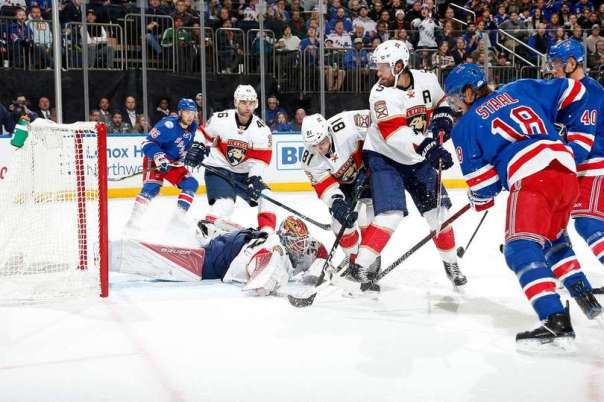 But the real loss came in the overtime period when Mika Zibanejad went down awkwardly into the boards. His foot jammed against the boards and you saw his ankle bend the wrong way. He was helped off of the ice, putting no weight on his leg. Alain Vigneault announced after the game that he broke his fibula and will be out for the next 6-8 weeks. He has 15 points (5-10-15) in the team’s 19 games.

It was Chris Kreider’s first goal in his last ten games that put the home team in front with 6:45 to go in the opening period of play. Marc Staal made a good defensive play to get the puck out of the zone to Derek Stepan. Stepan then slid the puck over to Kreider, who wristed a shot from the circle for his fourth of the season.

Hayes and Miller had a two on one, which led to an extended period of offensive pressure, and eventually a Panthers’ penalty. Sceviour took a high sticking penalty on a scramble in front to keep the puck out, and shortly after, another Panther put the puck over the glass to give the Rangers a brief (about 20 seconds) 5 on 3 power play. They failed to convert on it but saw some quality chances. The Rangers recorded 14 shots on goal to the Panthers’ 5 to end the period.

For the better part of the first half of the second period, it was all Rangers just flying up and down the ice with chances upon chances. One included a give and go between Vesey and Zuccarello, but Reimer came up with a big save.

On the Rangers’ third power play of the game, Barkov nearly scored short handed on a misplaced Lundqvist, but the puck just trickled wide. The power play was cut short, though, as Brady Skjei took a penalty for putting his hand over the puck. It was Keith Yandle who took advantage of the man advantage situation for Florida as he ripped a shot from the point. A screened Lundqvist couldn’t track the puck as it went past his shoulder for a tie game.

Hayes took a penalty for interfering with Reimer, and Jokinen had a short breakaway that Lundqvist stopped to keep the game tied. Grabner blocked a shot and then sped down the ice with the puck. Reimer had trouble with the shot and was forced to juggle it a little before time was stopped. Despite some decreased energy, the Rangers still led the Panthers by 9 shots.

The third period started out fast for the Rangers, as only 1:45 in Mika Zibanejad netted his fifth of the season. A pretty back pass by Zuccarello found Zibanejad’s skate and eventually the back of the net for a 2-1 lead.

Shortly after, a highly questionable offsides call on the Rangers saw the puck slide into the back of the net. However, play was whistled down by the time it went in, and the call remained that Girardi wasn’t able to keep the puck on the line by just an inch.

Aaron Ekblad tied things up for the Panthers with 12:06 to go in the period. He beat Lundqvist top shelf on a deflection by JT Miller, who hasn’t had a lot of luck as of late.

The Rangers nearly took the lead again when Rick Nash wasted a little too much time skating around a sprawled Reimer. He blocked it with his stick, but the puck skipped over it and found its way to Kreider, who missed just wide on the tip-in.

Brandon Pirri then took a delay of game penalty with under ten minutes left in the third period, but the strong play of Henrik Lundqvist kept the game tied all the way to the end of regulation.

Mika Zibanejad tripped over the skate of one of the Panthers, and he slid hard into the boards with his leg in an awkward position. He couldn’t put much weight on his leg as his teammates helped him off the ice. It wasn’t easy to see this happen to one of the best players on the Rangers. Unfortunately, he did not return to the bench.

The pace for the overtime was incredibly fast, and the chances flew both ways. JT Miller had a chance to put the game away for his team, but Reimer barely put the pads together to come up with a save. In the dying seconds of the three on three play, both teams seemingly had a short breakaway opportunity, but it headed to a shootout.

The Rangers chose to shoot first, but both Zuccarello and Pirri failed to put the puck behind Reimer. Trocheck scored first for the Panthers, but it was Barkov that used some nifty moves on Lundqvist to give his team the win as the disk slowly slid behind him. Hank didn’t recognize the puck was still in motion, and after review, it was called a good goal.

Overall, the Rangers played a good game. The first game back home after a road trip can be hard, but they came out with power for the majority of the play. Even their defense looked better for the most part. And speaking of defense, Ryan McDonagh played a great game. He was breaking up plays left and right and was solid for his team.

Offensively, it seems the Rangers’ goal scoring has slowed down in the past two games. But that’s not something to worry about. They barely lost the game against Columbus by two goals, and Sunday’s loss was a shootout. This is not what’s to be concerned over. The Zibanejad injury is really concerning, and this team will miss his presence tremendously over the next two months.

Their next matchup is against the defending Stanley Cup Champion Pittsburgh Penguins on the road. That’s where it ended for them last season, so you can bet they’ll come out with a fiery passion and a lot to prove. Make sure to turn on the TV at seven tomorrow when the first of the home and home battles begin.